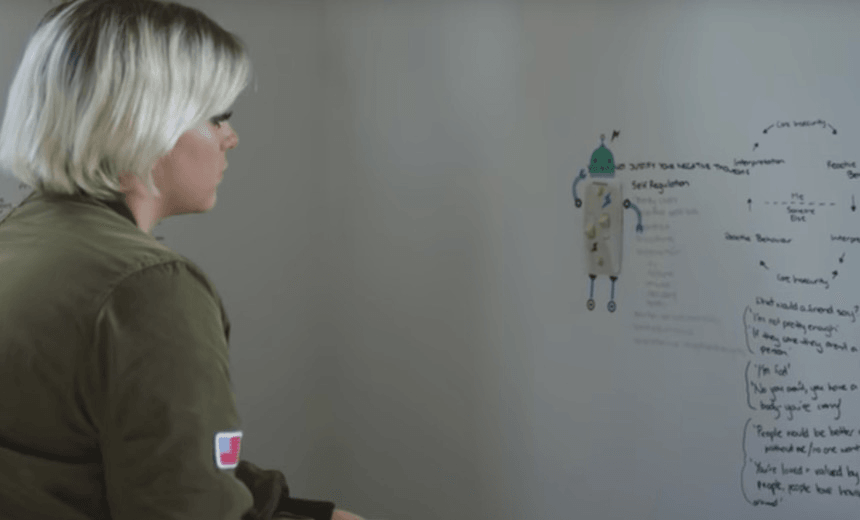 Attitude is nearing 500 episodes over 13 years, and its current mental health series shows that it deserves a far better timeslot than 8.30am Sunday, writes Duncan Greive.

New Zealand has been getting more comfortable confronting difficult issues in primetime. Last year, Nigel Latta: The Hard Stuff’s exploration of suicide and teenagers’ online lives was a hit. Earlier this year another season of The Undateables, a British show about dating amongst the disabled and those with learning disabilities played at 8.45pm Mondays on TVNZ 2. And despite the exploitative name, Embarassing Bodies has helped open eyes and minds to the reality of those whose physical form deviates from a societal conception of ‘normal’.

All of which makes it somewhat mystifying that Attitude, a New Zealand made and funded show about people living with disabilities, airs at 8.30am on a Sunday morning. Perhaps it’s the name, or the elevator pitch – perhaps they needed something borderline offensive as a hook. Whatever it is, it’s not the content, which is made with the same production values, curiosity and sense of motion and discovery as the best of those which air in primetime.

That’s particularly true of the four part special airing currently on mental health, subtitled ‘In my mind’. It’s the topic of the moment, both because we seem to be in the midst of a national crisis, and because we have finally gotten a bit more comfortable talking about what’s eating us up. As a result this production is perfectly timed, that rare situation where you drop something months in the making into an environment desperate to know more.

The first episode looked into the effect of social media on mental health. In short, it’s bad. We’re creating idealised visions of our lives which we all look at and then take turns feeling shitty about. This sucks for a lot of people, but for those prone to anxiety or depression or other mental illnesses, it can send you into very dark places.

This is captured most affectingly by the Torkington family, who talk frankly about the impact Instagram had on them. Aurelia, now 15, joined the image sharing service at 11. She ended up in a group of friends which fetishised self-harm, with private accounts comparing outcomes. While she seems in a far better place now, the picture conjured is deeply concerning.

Other subjects don’t reach the same level, but are nonetheless deeply affecting and open about the places their digital lives took them. This is all accompanied by an academic’s commentary, which is mostly excellent and illuminating, until the end when her prescribed solution is to get back to nature, because nature is truth. Which is fine, but seems a little trite and maybe not all that scientific.

The following episode looks at the mental health of mothers (read Emily Writes’ more in-depth response here), with three women in quite different situations profiled. It helps show that these issues aren’t isolated to any income group or culture, and can come in through any door. All those profiled sought and received help from some source or other, which seems to be critical – but so many are unable to access such help, which is the troubling note lingering in the air as the episode ends.

Still, the existence of Attitude at all cannot help but elevate understanding of what life is like for those living with disabilities in any sense of the word, and for what policy and support should look like too. That the show, and these episodes in particular, airs in a relatively obscure timeslot is unfortunate, but mitigated somewhat by its tremendous accessibility via other means: AttitudeLive is an accompanying website which bulges with excellent accompanying content, and numerous episodes live on YouTube, where some have achieved over 500,000 views. The parent company which makes all this exports around the world, an extraordinary story in its own right, and is nearly 500 episodes deep into a 13 year run, an exceptional achievement. One which deserves more recognition and prominence – not just because it helps us all better relate to one another, but because with some care and attention to its framing it would likely rate very well, too.