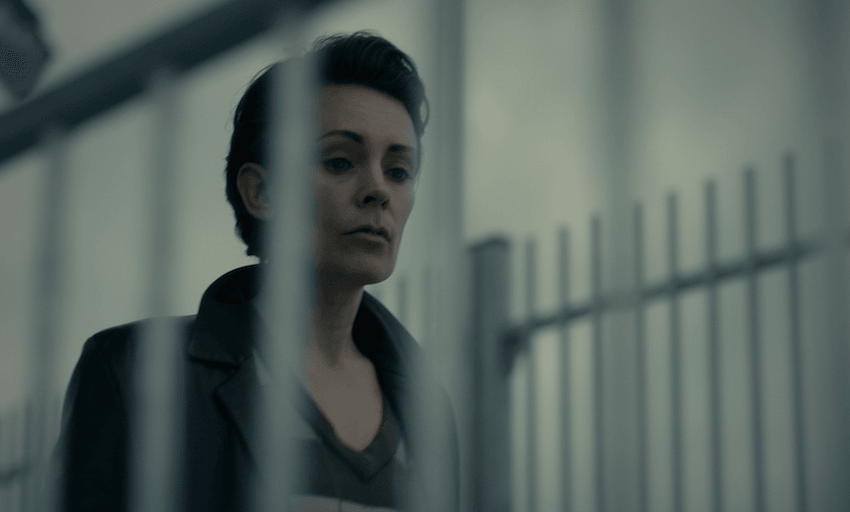 Kate Elliot as Detective Jess Savage in The Gulf, the Waiheke-set procedural that debuts on Three tonight.

Review: The Gulf is a genuinely world-class crime drama set on Waiheke island

Kate Elliot as Detective Jess Savage in The Gulf, the Waiheke-set procedural that debuts on Three tonight.

For years, New Zealand has bemoaned the gap between much of our television drama and the cutting edge out in the world. That gap might finally be closing, writes Duncan Greive.

He’s just a minor character, eating an ice cream. It doesn’t seem all that revolutionary, but in the context of New Zealand drama, it sure felt like it. A retired cop on a largely rural island would ordinarily conform to a very narrow set of expectations. Gruff, un-PC, bewildered by modern technology, willing to bend the rules to get the job done.

This one is softly-spoken, gentle, acknowledges failings and doubt. And eats ice cream. A small attribute of a second-tier character, emblematic of a level of care I’ve rarely seen in our big budget drama. Such grace notes are strewn throughout The Gulf, a taut new six part mystery premiering Monday on Three. It’s billed as New Zealand’s Broadchurch, which isn’t a bad marker. It shares with that breakout hit a combination of naturalistic dialogue and characterisation, coupled with a creativity in plotting and direction which makes it genuinely unnerving at times.

A German-New Zealand co-production, already sold into multiple overseas markets, The Gulf has had an air of higher expectations since its first announcement. It’s set on Waiheke Island, but not the vineyards-and-mansions version we know today, more akin to Great Barrier, or the “Waiheke of the 70s”, as lead actor Kate Elliott told the TV Guide. She plays Jess Savage, an on-the-nose name for a bullish cop, recovering from amnesia sustained in a car crash which killed her partner. She awakes in hospital to news that a young boy, missing and declared drowned five years earlier, has been discovered on a remote road, alive but not well.

He’s not speaking, clearing traumatised, and Savage leads a squad made up of the original island police and reinforcements from the mainland, tasked with figuring out who took him, and where he’s been in the intervening years.

Both Elliott and Ido Drent, the somewhat distant and hard-to-read detective Justin Harding, deliver career-best performances, clearly relishing the chance to make work here with international values and style. The first episode has to lay out the land, and at times teeters on the edge of cliché, but is rescued by an extraordinary final few minutes, a boldly stylised conclusion that adroitly delivers a twist that signals the series’ intent.

The second episode is far more assured, barrelling along with a combination of urgency and menace, as suspects are briskly gathered and ticked off, again concluding with a major plot advance that leaves you desperate for the third episode. This is a clear contrast with The Bad Seed from earlier this year, which had a similarly promising start, but couldn’t resist the urge to head into amplified, soapy territory, revealing too much, too stagily and soon.

By contrast The Gulf is confident that the gaps and unknowns, far from confusing the audience, will keep them engaged. It’s further evidence that Screentime, the production house behind some of the best TVNZ 1 Sunday telefeatures (Resolve, Dear Murderer) in recent years, is the best in our business at this style right now. So much of that is down to the writing and plotting – this feels like a series crafted over a long period of time, interrogated and tested, lean in a way that too many of our recent dramas have felt out-of-shape.

It has some issues, still. Certain performances have a cringy extravagance, most notably the missing boy’s father, who really dials it up to 11 in every scene. It also falls into prestige crime drama trope traps reasonably often. One suspect, Billy Blanks, looks like he bought all his property’s exterior decor at an auction after True Detective was done with it. Elliott’s character’s moody flaws are pure The Killing. And the missing children are perhaps a touch too Broadchurch.

For all that, this is an event in New Zealand dramatic television. The use of Waiheke as a location is clever, better is the distorted vision of it as a place slightly beyond conventional law enforcement. The slowly-clearing amnesia Savage suffers from is an inspired device – along with two memories, there are two investigations (the historic and contemporary) and two police units, the city and island. These tensions help keep The Gulf unstable and hard to read, an intricate sub-structure without which it would be just another pretty but empty vessel. The Gulf is anything but, and in an era of cult shows coming from all over the world, has a chance to travel far further than the brooding harbour in which it was born.

The Gulf is on Mondays at 8.30pm on Three