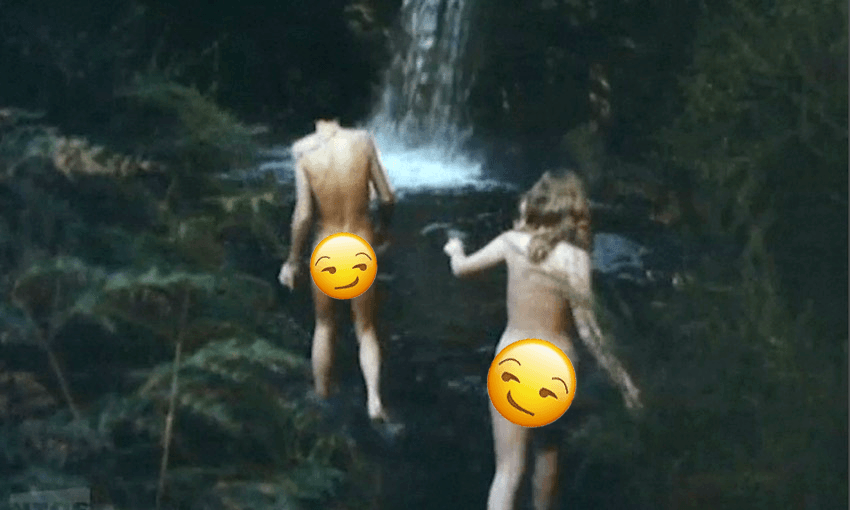 Tara Ward takes a trip back in time with this classic 1980s New Zealand tourism video. Be warned, it contains bare buttocks.

Covid-19 has made us tourists in our own country, so there’s no better time to wrap your optic nerves around the classic tourism film Come On to New Zealand. It was a 34-minute promotional campaign made by the National Film Unit in 1980, aimed at American tourists and the new long-haul air travel market. In 1980, this was our chance to showcase our country to the world. In 2020, it is an extraordinary glimpse back in time.

Come On to New Zealand is bursting with your standard tourist shots of high-country farms and mountain streams, and there’s a lot of talk about sheep. Boy, did we love wool in the ’80s. Cut us open and we’d have bled lanolin. It touches only briefly on Māori culture, preferring to focus on New Zealand’s eclectic range of activities, from acrobatic skiing to pottery, scuba-diving to skinny-dipping. Yes, people get nude in this promotional video. There was a lot going on in New Zealand in 1980, but there was even more coming off.

We’ll never know how many Americans were convinced to visit by this video, but it’s a portal back to another New Zealand. This was a time when the saxophone and flute were the soundtrack to our lives, and we lived alongside fish “the size people dream about”. Sweet dreams are made of this, Billy Bass, so let’s enjoy a play by play breakdown of Come On to New Zealand’s best bits.

1:15 “Whatever your interest, you’ll find it here in New Zealand,” narrator Bob Parker promises, his dulcet tones welcoming us to this strange journey back in time. These first moments suggest New Zealanders were going places, mostly by wind-surfer, hang-glider and dune buggy.

2:15 The travel montage peaks with a top-dressing plane. Come to New Zealand, get doused in fertiliser.

2:52 “We are a world in miniature,” Bob says, as miniature people run down sand dunes. Americans would probably call them ‘children’.

4:02 Sultry saxophone music hits our ears like a fresh drop of superphosphate. The only thing New Zealanders love more than growing meat is eating it by candlelight, and a naked flame atop an apricot-coloured tablecloth is the height of Kiwi sophistication.

4:30 Some classic ovine banter from Bob. “Sheep!” he says. “There are 16 million of them. That’s 20 for every one of us. Politically, one wonders, who leads who? But let’s keep politics out of this.” Good move Bob, because by the time we get to the 17 minute mark, politics will be the least of our problems.

5:46 “Being an agricultural land, we have a keen interest in growing two blades of grass where just one grew before.” Sheeples, I can’t stop thinking about this. Would you travel halfway across the world to watch grass grow? I’m about to put it on my CV in the Interests section, next to ‘hang-gliding’ and ‘eating mutton by candlelight’.

9:47 We’ve seen about six people so far, which was indeed the population of New Zealand in 1980. Most of them are white men who spend their days at the golf club, or as we called them last century, those “tree-lined, bunkered havens”.

16:12 We move from the country to the city to get our first tantalising glimpse of modern New Zealand: rubbish day on Oriental Parade.

16:34 “It’s a safe country. You can walk without being molested”. Always a bonus.

16:55 A charming montage of white men doing things. They sleep in snazzy hotels, where they’re served hot drinks in bed by women wearing silky negligees. They work in the garden, before jogging along the waterfront and eating a pie for lunch. Oh, to have a penis in the ’80s.

17:25 Hold the landline, we have our first nude. Someone’s taking a shower, and ignore me like a white man eating a pie in a park, but is this really how we lured visitors to our fine country in the early ’80s: naked women and running water?

20:50 Two happy tourists stroll through a geothermal wonderland. Hot steam rises from the ground, water bubbles away, and nothing will distract us from this uplifting scene of New Zealand’s natural beauty.

21:03 The tourists are skinny dipping. THE TOURISTS ARE SKINNY DIPPING. Fly me to the moon in a top-dressing plane, because this is shocking, or incredible, or both. Either way, your taxes paid for this, Boomers.

21:05 Rude? I’ll show you rude. While that bloke had to go fishing in a suit and tie, this couple has carelessly thrown their underpants on a rock (a brassiere, as I live and breathe). Now they’re as naked as they day they were born, and what does Bob Parker have to say about it? Absolutely nothing.

21:27 We couldn’t even go to the shops on a Sunday in 1980, but these two get to cavort through our waterways like nobody’s watching. Well, we’re all watching, and who’s sorry now?

21:41 Slippery holes, drippy surfaces, and the rhythmic pounding of a pottery wheel. Things have taken a turn. Bob Parker has been shocked into silence. This has become a low-budget Ghost, but with more sheep. Whoever edited this deserves an Oscar.

32:34 Is there anything more to say, Bob Parker? Yes. “Tipping is discouraged, and we speak the same language. Well, nearly!” Ha ha, nearly! Did we mention we love sheep?