Rose Matafeo does it again with new series Starstruck – a joyful and unabashedly Kiwi take on the Notting Hill story, writes Alie Benge.

Starstruck opens with Jessie (Rose Matafeo) in a sparkly dress, arguing with her flatmate outside a nightclub on New Year’s Eve. She’s convinced to wing-man her friend, then gets drunk, and goes home with a man she met in the men’s bathroom. In his house the next morning, she pulls back the bubble wrap on a framed movie poster leaned against the wall, recognises the face of the man upstairs, and realises who he is. She has slept with movie star Tom Kapoor. Clear your schedule for the end of the month, and push your laundry off the couch, because you’ll want to binge this one.

Starstruck immediately reminded me of the UK comedy Catastrophe with its quippy banter between the two leads, and a quick Google revealed it was produced by the same crowd, which is fantastic news because there was never quite enough Catastrophe. Starstruck is written by Matafeo and fellow New Zealander Alice Snedden, who both seem to absolutely nail everything they put their hands to, and they clearly have a knack for pitting Kiwi awkwardness against British awkwardness. Tom has a bumbling physical discomfort about him, while Jessie is rambling and deprecating – of both herself and Tom. At one point, they say goodbye before walking off in the same direction. After a joke about whether Jessie is a super fan who will kill Tom she says, “Oh please, I’m not a fan.” I was laughing the entire episode.

In the 2000s romantic comedies moved away from lo-fi classics and problematic faves like 10 Things I Hate About You and My Best Friend’s Wedding, to highly stylised films (usually starring Katherine Heigl) that lacked the spark of their ancestors. Starstruck feels like a return to that earlier lo-fi era. The characters don’t sport perfect blowouts, or live in completely unrealistic flats. They look like you and your friends; they have the same conversations you have outside clubs on New Year’s. They’re you, but funnier.

Starstruck is something we don’t see so much any more, at least on the big screen: a romantic comedy with depth and charm. Observational comedy works best when the characters live in the same world as us. And this comedy is beautifully observational. Though tipping its hat to the golden era of romcoms, it updates the style by observing the ways we live, work and date now. The first male character we meet mansplains Bitcoin, Jessie has to chase her Uber down the street, and she has that shitty ex we all recognise, the one we debase ourselves in front of and who absolutely is not worth it. 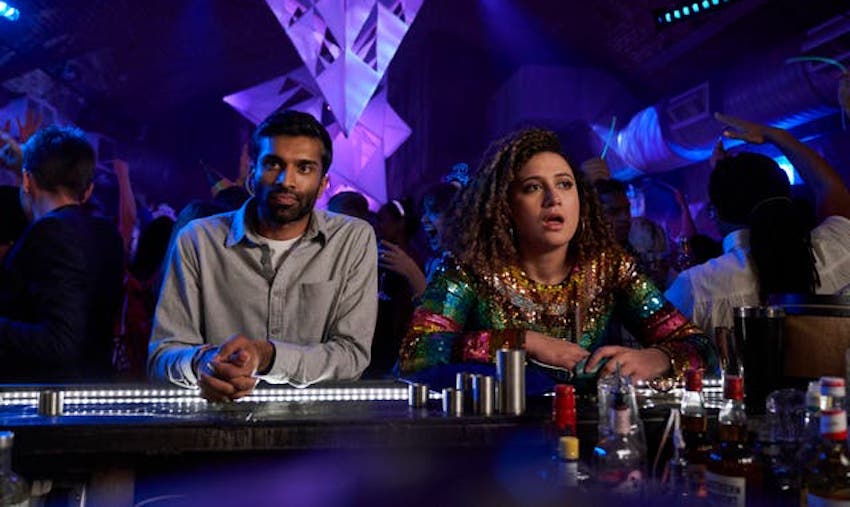 Nikesh Patel as Tom and Rose Matafeo as Jessie in Starstruck (Photo: Supplied)

Every generation gets its own redo of the “famous person falls for normal person” story. You can trace a lineage from Roman Holiday, to Notting Hill, and now to Starstruck. There’s something about this trope that plays into a very human fantasy – not just to be loved by someone much further up the social ladder, but to have that love enviously observed by friends and exes. The most satisfying moment of Notting Hill is when Hugh Grant takes Julia Roberts to meet his flabbergasted friends. In the same way, the most satisfying moments of Starstruck are when Jessie and Tom’s relationship is seen by others: when her ex sees the two of them together, for example, or when Tom walks into her kitchen to find Jessie’s stunned flatmate – the same flatmate who had earlier wonderfully acknowledged the trope at the heart of the show: “He’s a famous actor and you’re a little rat nobody.” This fairytale is the slightly more plausible version of marrying a prince. It’s a version that exists in a world where princes don’t roam forests, but where celebrities frequent bars. It feels unlikely – but vaguely possible. Starstruck is a hilarious, joyful riff on this old story.

I expect every review will mention that this is essentially a gender-reversed Notting Hill – it’s not a hot take. The show doesn’t seem to deny this association. In fact, it plays it up. It allows us to form expectations based on our familiarity with the film, and then surprises us by flipping those expectations. This is executed perfectly when Jessie leaves Tom’s flat in the morning, opening the door to a crowd of flashing cameras. We know this scene: she’ll end up in the press, it’ll be the central turning point, and the catalyst for all the drama that follows. But instead, we get an anti-climax. The scene comes to nothing because one of the paparazzi calls out, “It’s just the cleaner!” and the cameras stop flashing. Starstruck isn’t just a retelling. It’s absolutely its own thing. It’s like putting clean sheets on the bed; it’s the same old bed, but it feels like new. It takes incredible skill to reanimate a familiar story, and make it feel fresh.

Nothing thrills New Zealanders like hearing other countries talk about us. We all know that feeling in a cinema when a character on screen says “New Zealand”. You can feel the energy change. Pairs everywhere nudge each other. This is deeply uncool and I try to be chill and above it all, but I still feel a little glow of recognition hearing a Kiwi accent in an HBO/BBC production, and not just the accent, but a Kiwi sensibility in the humour. Rose Matafeo’s spike in popularity feels like personal recognition. It’s like we all grew up in the same house, and sent someone out to spread the good news of New Zealand. I’m sometimes shocked when I remember Kiwi celebrities don’t actually know me.

Seeing Kiwiness be recognised and loved by an international audience feels a little like a famous person falling for a normal person. Seeing a Kiwi take centre stage in Starstruck, a BBC show costarring Minnie Driver? Forgive my hyperbole, but it’s like Hugh Grant bringing Julia Roberts to dinner – a Notting Hill experience every New Zealander can share.

Starstruck airs at 9.30pm on Wednesdays on TVNZ2. All episodes will become available on TVNZ OnDemand at the same time.


In the new episode of The Spinoff’s TV and pop culture podcast The Real Pod, Alex Casey and Jane Yee mourn the recently announced death of Pods and recap the latest from MAFS AU and Popstars. Subscribe and listen on Apple Podcasts, Spotify or your favourite podcast provider.