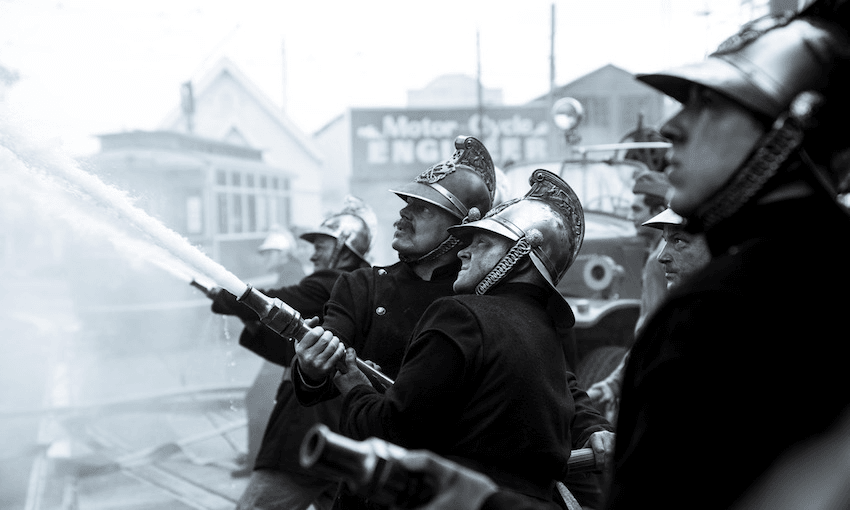 This week’s Sunday Theatre feature is Ablaze, a drama about the 1947 fire at the Ballantynes Department Store in Christchurch that killed 41 people. Tara Ward reviews.

The Ballantynes Fire disaster is etched in New Zealand’s collective consciousness as one of our greatest tragedies, but it wasn’t until I watched Ablaze that I realised how disastrous it was. 41 people died on November 18, 1947, when a fire swept through the upmarket Christchurch department store and razed an entire acre of buildings to the ground. It was one of the biggest fires in New Zealand’s history, and forever changed the way we deal with fire prevention and public safety.

Ablaze, a gripping story about the events of that fateful summer’s day, is an excellent way to close out TVNZ1’s Sunday Theatre season. Written by John Banas (Underbelly, Miss Fisher’s Murder Mysteries), Ablaze tells the stories of those closest to the fire – the sales assistants who first noticed the flames, the firefighters trying to save the building, and the dressmakers and office workers trapped on the upper floors.

Filmed in black and white, and bookended by colour archival footage of the fire and the funerals, Ablaze has an authentic historic feel and allows real footage of the fire to fit seamlessly into the story. Other times, it’s a frustrating distraction – Ablaze has faithfully recreated the hair styles, costumes and buildings from the ‘40s, so it’s a shame we miss all the finer details that colour would have bought to life. Ballantynes was a world of glamour and luxury, and deserves to be depicted in all its vivid glory.

Ablaze begins four days before the fire, and it’s all go in Ballantynes. It’s Carnival Week in Christchurch, the Christmas tree lights are switched on, and staff are abuzz about the upcoming wedding of Princess Elizabeth to her Greek sailor boyfriend. Post-war New Zealand is beginning to boom, and Ballantynes has a staff of over 480 people to tend to every customer’s need.

It’s a place so classy that waitresses must serve cake from the right, female employees are expected to wear a hat and gloves to cross the floor, and a visit from Miss New Zealand sends everyone giddy with excitement. Basically, 1940s Ballantynes puts a 60% Briscoes Super Deal sale to shame.

A sense of dread smoulders slowly through the first half of Ablaze, as we meet the poor folk who might not survive the day. The show takes plenty of time to develop the central characters, like store owner Kenneth Ballentyne (Sunday Theatre stalwart Mark Mitchison), terrifying floor manager Edith Drake (Alison Bruce), and sweet Violet Cody (Hannah Marshall), a credit worker who worries that announcing her pregnancy will mean she’ll lose her job. “Have a baby, suddenly you’re not employable any more,” she complains, a laugh/cry reminder that not everything has changed since 1947.

Gossipy sales assistant Cyril is the villain of the piece, skiving off to enjoy a sneaky smoke in the cellar. “You know you shouldn’t be smoking down here,” he tells his mate, as they puff away among the naked mannequins and paint tins. Knowing what lies ahead, every light of a match feels ominous. Cyril’s a rare rebel in a company that’s a stickler for rules and thrives on a fierce hierarchy, and it’s the unquestioned obedience to these rules that later proves to be the downfall of many.

What Ablaze does best is show how trapped Ballantynes employees were, both in the rabbit warren of a building and in the unflinching expectations of their employers. When the plumes of smoke begin to fill the lower floors,  staff are ordered to save the merchandise rather than themselves.  Upstairs, workers remain oblivious to the danger, and when the fire gets worse, they refuse to evacuate until they get permission to do so. Even the Fire Service won’t legally enter the premises without management’s blessing.  All those good manners, doing nobody any good at all.

“Loyalty and devotion to duty will kill them. The fire will just finish the job,” a fireman says, watching as Ballantynes is swallowed up by flames. It’s hard to imagine this type of fidelity to a business today, or even working in a building without an evacuation plan. Ablaze constantly reminds us that had the right people made different choices, more lives would have been saved. The drama ends at the perfect moment, leaving the true horror of the disaster to our imagination.

At it’s heart, Ablaze is a poignant story about a bunch of ordinary New Zealanders who went to work one summer’s day and never came home. 1947 Ballantynes was a world away from today’s mass produced, fast-fashion shopping experience, but the emotional stories of Violet, Cyril and Edith from that November day will still resonate with viewers, seventy years after the tragedy. Ablaze is a memorable drama, one that will share an important piece of New Zealand history with a new audience.