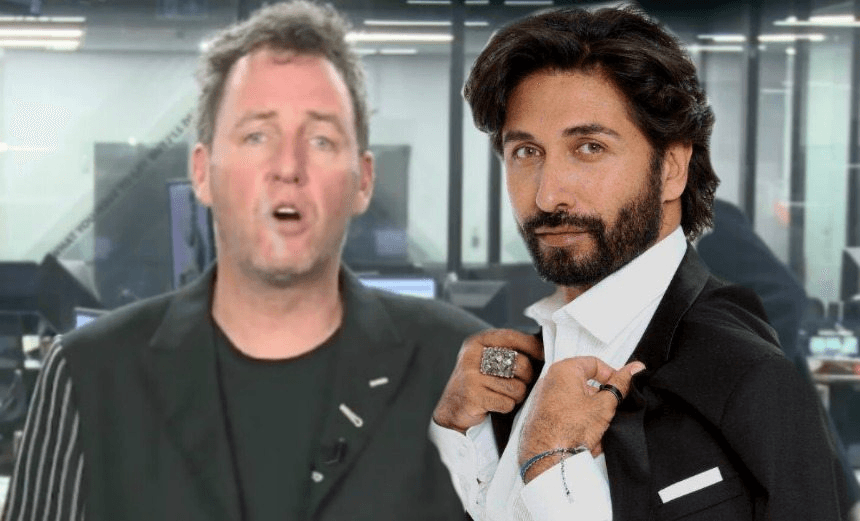 By Colin Mathura-Jeffree
Guest writer
Made possible by

Bridging the vast gap between Fashion Week and Hosking Week, we asked the icon Colin Mathura-Jeffree to critique some of Mike Hosking’s boldest looks* from Mike’s Minute.

This isn’t bad. The lapels are a bit ’70s, you know, and then we’ve got the, the pocket flower which is internally in the pocket square. I can see what he’s doing. The jacket lapels are a bit large. I have to hand it to him: this is a wicked conundrum. You know? It’s ironic, like everything he does.

I like the lapel flower, it’s very forward-thinking to match it with the pocket hanky. His gayness is right up there, for a straight man he does very well.

He’s got such a face: he’s like the evil prince in a Disney movie, don’t you think? The evil, petulant prince of New Zealand media. His eyes do sparkle when you meet him though. I’ve met him a few times and he always says, “What are you doing here?”And I feel like saying to him, “I’m your Uber driver.”

Oh no, no. Look, I come from modelling. I was baptised as a model in 1991. These are the kinds of things I wore back then, you know? Harlequin was very big back then. No.

I don’t mind this look – it’s very classic, the lines are clean, you know? He is representative of his age and his actual demeanour here. It works for me. I love the jacket for him, but would I wear it? Let’s just say if there’s nothing else to wear, I would wear this.

I know what he’s trying to do here. He’s trying to match the t-shirt with the lines of the jacket. This actually, to me, wrong to do. The jacket is actually wrong for him, in terms of his character. It may be a bit of a shield, you know?

Would I wear that? Yes. Would I wear it better than him? Of course. He’s got pretty eyes, but terrible hair.

No… No no no. First of all, it’s not ethnically appropriate. I would imagine someone like Kanye West in this, you know? Not this man. It’s like something you’d see on a 22-year-old, 23-year-old. If I was presented with this to wear, I would be particular about wearing it.

The byline doesn’t work with the look and he knows that. When something is, is askew, we take more notice, you know? Even the lady behind him is disgusted. She’s going, “Should I throw my Maggi’s cup of soup on him?”. There’s no fresh take with this outfit. This t-shirt might work if you’re at the beach, but no. Again: no, no, no, no, no, no, no.

The white t-shirt doesn’t match the lapels. Wear something else underneath that Hosking!
That’s where he fails it. Wearing a t-shirt like that says, “hey, I’m relaxed.” Wearing a jacket is saying, “Hey, I’m business”. This is just too much of a contradiction. For me, I’d get away with that – but I wear it better, you know?

It’s also too small for him in the shoulders. It should be one size bigger. He’s clearly picked up a stock size like “hey, this is cool and edgy. This is my electric future.” And then he’s just peaced out. But there’s no peace for me, and the woman behind him is disgusted because she knows he’ll never own an electric car.

This is actually good, this is a good style for him. Everything works. The blue goes with his eyes to make them sparkle, he actually looks sophisticated. I’m tearing up, I even think the woman behind him is tearing up. This is how you do style, Hosking.

I think not only is this about “telling it like it is”, but it’s got a good “older man that owns a boat” vibe, you know? This is a guy close to his fifties, who’s actually got money, relaxed about that, and has a hot wife. This says: “I’m good with life, you know, telling it like it is.” It’s not challenging in any way.

Some of his other looks challenge people and you should never do that. You should never sort of have a nervous reaction looking at him when he sits in front of you on the telly.

I like the jacket but, you know buddy, just wear a shirt. A beautiful, crisp white shirt under that would be amazing, or even a blue shirt to bring out his eyes or his fake tan.

Score: too enamoured with tan to give response

Oh, here we go. See? Now we’ve got a shirt. This is not bad. I like the jacket, but sadly the shirt is still wrong. He’s got that National Party blue, it’s like a secret message to the audience that says “I support Key no matter what’s going on,” you know? It’s like the Illuminati.

I believe if anyone’s in a secret society, it’s Hosking and I think that his clothing is giving secret signals to his secret brotherhood. And look at those triangles behind him, and the sacrificial blonde behind him. Illuminati.

That’s nice. He suits these kinds of neutral, passive colours. Now that we’ve worked out Hosking’s Illuminati code, we can read the secret messages in here. If you zoom in on that person’s desktop, she’s trying to tell us something. It’s like, break the code. This is like The Matrix.

I think the hidden message he is putting out is what he always says, “Whatever the autocue says, I’m gonna contradict it in the reality of the real world I live in. And also, Pākehā lives matter.”

* Sharp-eyed and fashion-forward readers will note that three of the ten jackets are, in fact, identical – a fact which eluded Mathura-Jeffree and The Spinoff until we were too close to publication to care.