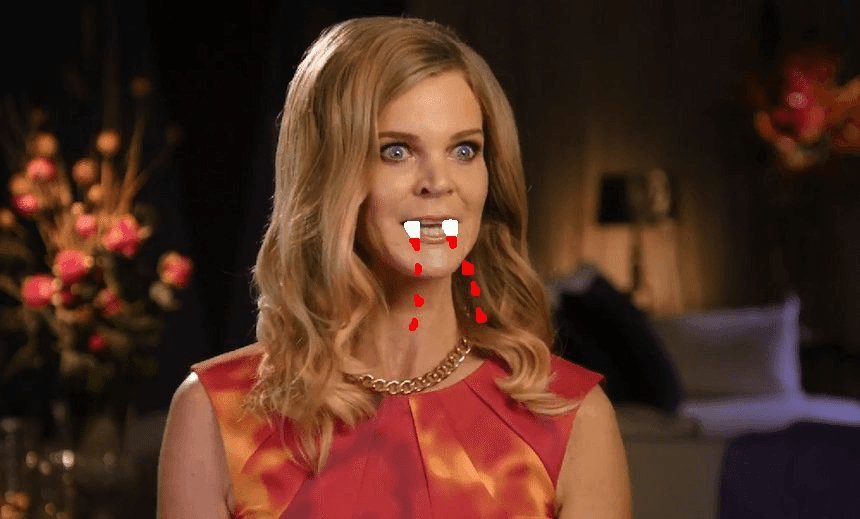 The Real Housewives of Auckland Power Rankings, Episode Three – An interview with a vampire

This is Auckland, where new money meets old. Alex Casey is going to try and laugh at The Real Housewives of Auckland through her weekly power rankings – because if we can’t laugh then all we have is the void. Click here for the first and second instalments.

1) Anne Batley-Burton, Queen of Everything

This week we felt Anne’s reign over the Real Housewives universe. She is the queen of the champagne, the pussies and the morally dubious fur coats. She also has this drop dead royal portrait hanging in her home, which my keen Antiques Roadshow eye would estimate is from the era known as “Jane Austen times”.

Whether Anne is a timeless entity, present at every major historical event in human history like our own Forrest Gump, remains to be seen. What we can say for sure is that she definitely feeds her cats hot roast chicken for breakfast, and that it pisses Cuddly Bear right the hell off.

This week Anne held a Pussy Galore (absolutely fine) party at her Goose Creek estate to raise money for her charity that desexes cats in the community. “Here’s to all the pussies!” she would yell occasionally, emitting her equal parts chilling and joyous robot laugh.

Sidenote: I made it out to The Pussy Palace myself this week, full detailed report coming to The Spinoff Thursday.

Despite being an animal advocate, Anne had some literal skeletons in her closet. She revealed a graveyard of fur coats to Michelle before the party, and I genuinely wondered how any of the 20000 animals in the vicinity of Goose Creek sleep at night.

But those weren’t the only ghosts lurking around The Little Doll. We also found out this week that she keeps her dead cat ashes in small boxes – each with personalised poems – on display in her home. For the love of God, watch this extra clip for more spiritual animal encounters.

With all of the festive ashes on display, the Pussy Party encountered one more hiccup before it went into full swing. The fairy lights fused the Pussy Palace, home to 140 cats, and sent Anne into an Alan-based frenzy rivalled only by this excellent viral video.

Just a huge shout out to Alan the handyman for not even flinching during this totally normal interaction.

Gilda was mad as hell and not taking it anymore this week. Michelle tried to get her psyched about wearing cat ears to the pussy party, and she called them “manky” and looked like she was about to go full AK-47 at any moment.

She described Angela bringing up old gossip as being like someone spewing around the corner and Angela picking it up and throwing it in her face. Part of me was honestly worried that Julia might have overheard, and taken the analogy to be a new vomit anti-ageing treatment. But more on that later.

Gilda made it to the Pussy Party, despite referring to it as “the gathering of the terribles,” and was quickly subjected to another dose of delicious Caci clinic face vomit.

After snubbing her, Angela called Gilda a “little runt,” and Gilda nearly responded with an upper cut. Delicious imo, those Housewives sure know their luxury potato chips. They really are just like us.

Louise had a quiet week, but made up for her absence by making really great faces during Julia’s genuinely horrific neck anti-ageing treatment.

Louise also had a sweet zinger after Anne revealed that she had seen many a desexing on her kitchen table (another fine thing to happen). “Oh was that Richard?” she quipped, 60 Minutes-style. Her gift of the gab continued to the Pussy Party, where she was somehow able to talk her way out of being speared by Gilda’s manky cat ears.

This week we learned that “a neck can be problematic on a woman,” which actually made me feel better about living with my chin retracted deep into the rest of my body like a modern day Jabba the Hutt. In order to “carry on her standard” of human worth via the smoothness of her skin, Julia went to the dramatic lengths of something called a vampire treatment.

It was a jaw-dropping process, observed in horror by Anne, Louise and the rest of the nation. Julia had blood extracted from her body, spun in some sort of satanic washing machine, and mercilessly injected back into her neck in what Jigsaw himself would describe as “a bit much”. It looked terrible, and put her loyal hair and makeup henchman to the test that will now be known as The Emperor’s New Neck.

Michelle was invited to Anne’s pussy palace this week, where she screwed her face up even more than if a muscular gymnast offered her a rice and bread salad at a Bunnings Warehouse opening. She also said this.

As it turns out, Michelle is much more comfortable wearing the skin of dead animals than caring for live ones. She went berserk in Anne’s closet and tried to barter down her mink coat like me in the auction comments for an untouched E.T. soap from 1982 on Trademe.

But the worst moment of the show came when she said this to Angela, driving a dagger deep into the chakra of every woman who has found themselves out in public without their Bridget Jones-style sucky-inny structurally engineered knickers.

What’s pretty clear at this point is that Michelle gives zero fucks to the power of ten. If this Vine doesn’t sum that up, then nothing will.

First things first, I am genuinely concerned for the welfare of Angela’s French assistant Léa, who seems to be trapped in some sort of Devil Wears Prada intern hell of her own creation. “You are absolutely adorable,” Angela whispered, before pushing Léa’s hair behind her ear.

Angela also has a tendency to talk very slowly to Léa, helping her with difficult English words like “reservation”, “hostage” and “stockholm” “syndrome”.

Angela needed to furnish her apartment this week, eyeing up leather chairs in a store with “trendz” in the name. Try explaining that one to Léa, she’d need a baguette to wipe her brains off the floor.

I thought of my stool at home that I took off the side of the road in the pouring rain in Whangarei, so wet it had become home to some friendly local slugs. However disgusting that is, it’s still not as bad as when Michelle did the hard sell on this “funky” thing that was clearly a just a bog standard mop head.

Peace did not descend after their retail therapy session, with Angela going nuts at the Pussy Party and accusing Michelle of not even being a New Zealander. “… And how do you define a New Zealander?” Gilda leaned in, eyebrows raised. Who said we can’t talk race relations in Real Housewives?!

As if that wasn’t bad enough, Angela auctioned her styling skills at the party and only received bids from Julia and her PA Léa who, due to a translation error, probably thought she was bidding for her own freedom.

666) This woman wearing a South American Skunk round her neck