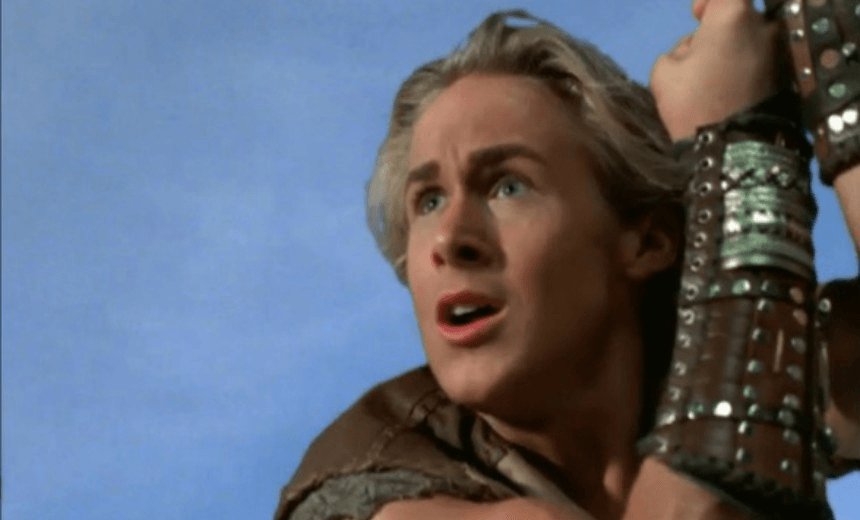 Remember when Ryan Gosling came here and made Young Hercules?

Once upon a time, in a land far away called 1990s New Zealand, someone made the greatest television show in the history of the universe. Alas, I’m not talking about Face the Music (love you, Simon Barnett), but the glorious piece of performance art known as Young Hercules.

Young Hercules is the best history lesson you’ll ever have, as long as you don’t believe anything you see. The visual effects are incredible; lightning comes out of people’s fingertips, for crying out loud. This almost never happens in real life. Also, I bloody love TV shows that show me how to live my best life, and if that means winning a fight against a man wearing a sack on his head while you’re both standing at the top of a ladder, then count me in.

Ladder fighting and finger lightning is all good and well, but let’s not forget the best Young Hercules thing of all: Ryan flipping Gosling.

Ryan Gosling reached the peak of his acting career when he came to New Zealand to play the fresh-faced, nimble son of Zeus. Young Hercules is his best work, and no amount of Golden Globe Awards or Oscar nominations will convince me otherwise. Did anyone in La La Land do cartwheels over a rickety swing-bridge to save the life of a woman made of metal? No, they did not, and frankly the world is a poorer place for it.

Listen, if there was an award for ‘Best Young Superhero Who Wins A Rope Fight to Singlehandedly Abolish Slavery in Athens,’ then Ryan Gosling’s name would be scribed all over it. It does seem like a niche category, but who’s going to deny a bloke who just escaped from a bunch of angry centaurs? Not me, friends. Not me.

Young Hercules’ moves are faster than a pile of polystyrene rocks tumbling onto his evil half-brother, and more powerful than a baby monster spitting out green goo that combusts into flames. He rescues a drowning man who falls from the sky, he flies through the air while lassoing a giant Phoenix, he helps send a giant into orbit. His hair is as shiny as his magical sword, and I am here for all 50 episodes of this magnificent masterpiece of timeless drama.

It might be the hypnotic music of the Bacchae, or maybe I’m just a saddo who enjoys sitting at home in her pyjamas and reminiscing about how good the ’90s were, but I’ve gathered together some of Ryan Gosling’s best Young Hercules moments for us to savour. Prepare to be as amazed as the time Hercules realised he was an evil presence trapped in a vortex of his own dream-world. You’re welcome.

The time he was a master of disguise

When he remained calm under a barrage of soggy lettuce leaves

Whatever the heck was going on here

The time he trained with a pair of giant ear cleaners

The time he avoided death by cartwheeling over a swing-bridge

And finally, I’ve no idea what’s going on here but it’s bloody awesome

Click below to bathe in the glory that is Young Hercules, only on Lightbox