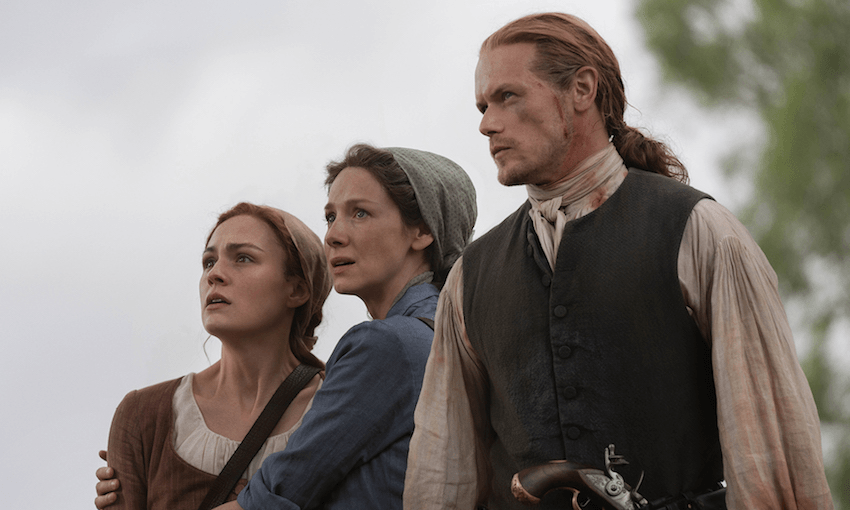 Outlander recap: Jamie has the worst birthday ever

It’s been a tough week in both 2020 and 1771, but things just got a whole lot worse for Jamie and Claire. Contains very big, very sad spoilers for season five, episode seven of Outlander.

We are locked in a bubble of our own distress, we are self-isolating in a heavy cloud of emotion, we are washing our hands with our own tears. Murtagh is dead, and it’s not looking good for Roger, either. I’m sorry, but no. This is a time of crisis. Where are the funny goats? Where are the talking coconuts? Who said we could handle any more disasters, when the entire planet is already up the creek without an 18th century paddle?

Outlander lured us in. They lulled us into a false sense of security through the power of a topless Jamie Fraser in a river and a hornbag Jamie Fraser in a tent, as if to say, we know why you watch this show. We know why you turn up, week after week, and it’s not for the DIY autopsy scenes. We’ll seduce you with the birthday boy washing himself in a river, and then we’ll sucker punch you with a death that you definitely did not want to happen, especially during a global pandemic. Life is shitty enough already, Outlander. Give us back our Murtagh.

Poor, gruff, silvery Murtagh. Roger crossed enemy lines to warn that the Regulators lose the Battle of Alamance, but it was too late. Murtagh was in too deep. You could feel it in your waters that something bad would happen, but it was still a shock when Murtagh was shot, right in front of Jamie, slumping into his godson’s arms as he quietly carked it. Nothing Claire was growing under a thousand glass cloches could save him now. Remember that scene where Murtagh reunited with Claire in the forest? Remember when we could walk in the forest? Those were the days, friends.

I refuse to believe it. We thought Murtagh was dead after Culloden, and then he turned up in Ardsmuir. We thought Murtagh was dead after Ardsmuir, then he popped up in a random blacksmiths. I’ll bet my entire stash of flour (three cups, use it wisely) that come next season, Murtagh will fall through the stones wearing a full set of doctors’ scrubs, pockets filled with hand sanitiser, screaming to anyone who’ll listen, “Whatever you do, don’t travel to 2020.” These are unprecedented times. Anything is possible.

Jamie was bereft. It was his 50th birthday, and Governor Tryon had ruined it, big time. Jamie raged like that herd of cattle that Claire let into Wentworth all those years ago, telling Tryon to stick it up his tricorn and throwing his Redcoat into the dirt.  This was Outlander’s best work all season, emotional scenes with a weight that no half-naked bathing scene could ever match.  Don’t get me wrong, the river scene was much appreciated in these dark times, as Jamie washed (still wearing his trousers, a curious decision) and called upon his war chief uncle, Dougal.

He might be dead, but you know what happens when you call Dougal? Dougal always picks up.

Look into the eyes, the eyes, the eyes, not around the eyes. It’s Dougal himself (or Graham McTavish if you insist on using his real name, like this is a fictional story or something), playing his own son Buck Mackenzie, a direct ancestor of Roger. Roger found himself in quite the pickle after being discovered in the Regulator camp, and Buck beat him to a pulp. Poor Roger, always getting the crap beaten out of him by random Mackenzie men. Anyway, being destroyed by your great-great-great-great grandfather is weird thing to happen, and when this is all over I’m sure they’ll share a hearty laugh about this super weird situation.

They’ll laugh and we’ll laugh and then we’ll all say, where were you in the global lockdown of 2020? And I will say, I was bawling into my last toilet roll about the untimely death of a loveable grump who once tried to save Jamie by performing a terrible sword dance.

The militia won the battle, but they’ll never win our hearts. Murtagh is gone. Claire’s glass syringe is gone. Roger is 97.5% gone, and I just gambled away my last three cups of flour. This might just be the worst birthday ever, and there’s not even an episode next week to cheer us up with some uplifting Idiot Hut antics or another fun game of ‘What’s Under Claire’s Cloche Today?’. It’s a long fortnight ahead, but like Claire saving a soldier who’s been shot through the lung from behind, we’ve got this.