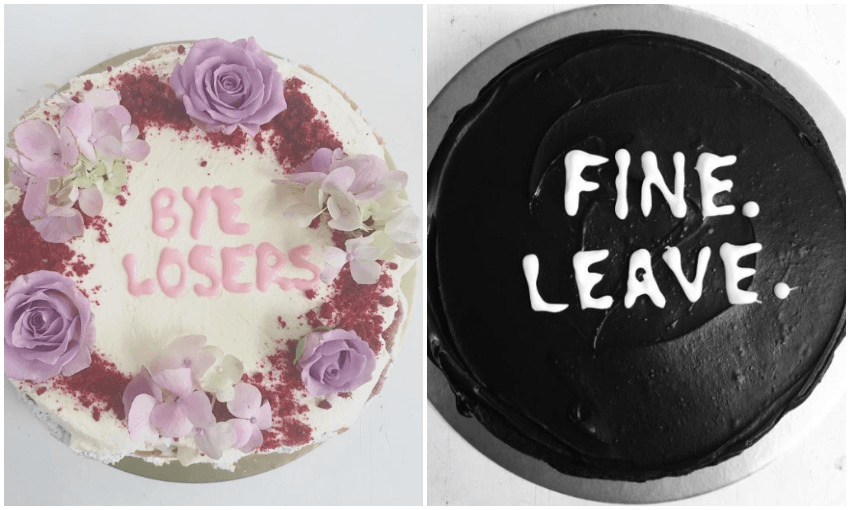 Gone are the days of wholesome messages on cakes, we are now living in a rude cake world. Alex Casey visits Tomboy to sample some delicious truths.

Baker Kate Marinkovich from Tomboy cakery doesn’t want to tell me the rudest thing she has ever had to ice onto a cake. “It’s just so rude” she winced. “Are you sure you want to publish it?” I told her I really, really did.

It really was too much to publish, but it was extremely sexual. Let’s just say that chocolate was an appropriate choice.

These cakes are not your average cake or dessert from the Cheesecake Shop, nor a hastily thrown together Pak n’ Save number. It’s a black Tomboy cake, a custom-made Wellington creation emblazoned with whatever message you so desire. And profanities are not just allowed, but encouraged.

“I’m sweet with writing anything, because it’s not my responsibility,” says Marinkovich. “I’m happy to do whatever people want because the cake is not coming from me – I’m just the messenger.” When she began her baking and catering business Tomboy, just two years ago, she advertised that they offered wedding cakes, birthday cakes and… divorce cakes.

Nobody has purchased a divorce cake as yet, but many people have jumped at the opportunity to gift their spouse, friend or colleague a cake far ruder than anything you’ll find in the trash of Chris Warner’s iPad. “Happy fucking Friday” (plus a celebratory c-bomb) was one of her first ever Black Cake commissions, a thoughtful afternoon tea gift from a boss to her employees.

“People understand that it’s a joke,” says Marinkovich. “It’s supposed to be funny and not taken too seriously.” Joke or no joke, the rubber hits the road a bit when she works alongside her own father, who occasionally helps out in the Tomboy kitchen. “I get that Catholic guilt thing and I have to cover it so he doesn’t see what I’m writing.”

On a recent trip to Wellington, I was invited to let rip on a cake of my own, a preview of Tomboy’s events during Wellington on a Plate where Marinkovich will teach you how to decorate a cake with a bit of vulgar expressionism. The night before, I lost sleep over what to write on my cake. I’m happy in my relationship and my job, and would rather let my enemies fester inside of my stomach like a cancer than ice them onto a cake.

I thought about the mean kid that laughed at my hairy arms when I was 11. That dickhead doesn’t deserve cake.

I settled on a simple phrase, one I could direct at basically everyone I’ve ever encountered online but, most importantly, myself. Delete your account. The perfect, catch-all phrase, easily as applicable if I gave the cake to a family member or if ended up eating it with my fingers alone in my hotel room. But how the hell do you write on a cake without going full Hagrid disaster mode?

“The point is that they are never going to be beautiful, they are supposed to look different to everything else that we do,” explained Marinkovich. This news, to someone who once exploded a lemon cake and burned a ring of shame into the bottom of the oven, was good. I began gently smoothing out the icing over the cake, my own personal buttercream zen garden.

It should have been meditative. It should have been Steve Jobs having a vision of the Apple wheel in a cornfield. Instead, I was sweating and shaking and generally livid that the buttercream was actively rebelling. “It was funny watching you because you were concentrating quite a lot,” Marinkovich told me later. “Maybe it will be different next time because we’ll have alcohol.”

The next time she is referring to is the two Black Friday (and two more PG Pink Sunday events), when Tomboy will open its doors to anyone who wants to unleash hell on a cake of their own – with some espresso martinis for inspiration. “People can feel quite daunted by cakes, especially with so many on Instagram now. But I think, just like anything, it comes with confidence. Not all the cakes look perfect, so if something’s gone wrong then just roll with it.”

After practicing writing HELP in white chocolate, I rolled with it. I laid down ‘DELETE YOUR ACCOUNT’ without breathing. I wondered what other messages Marinkovich will be expecting from her Wellington on a Plate attendees. “I want people to go all out. I want some funny, funny cakes.” Has she actually had to break hearts yet? “We haven’t actually had any break-up cakes yet.”

“We could have a prize. If someone actually came in and bought a cake to break up with their boyfriend, I would have something special for them in the future.”

I didn’t ask what “something special” meant, but I do know that Kate has made a special penis-shaped sausage roll at least once, so there’s something to wish upon a star. With four Tomboy cake-decorating events in the Wellington on a Plate programme, there are multiple of chances to rejig crucial aspects of your life via the sacred medium of cake. And it’s an open invite.

“I want anybody who isn’t afraid of foul language, good banter and having a good go at writing on a cake. You get to take it home afterwards, as well.” As of right now you have a couple of months to either start some beef, get your affairs in order or rekindle an old flame. Oh, and, never forget….

This content is brought to you by wellingtonnz.com. Home to NZ’s most epic food festival, Visa Wellington On a Plate is 17 days of lunches with wine, burgers with beer, workshops with cocktails and parties with cheese fondue. Come and experience our culinary capital this winter to fill your belly, mind and heart.

Gone are the days of wholesome messages on cakes, we are now living in a rude cake world. Alex Casey visits Tomboy to sample some delicious truths.
By Alex Casey
Senior writer