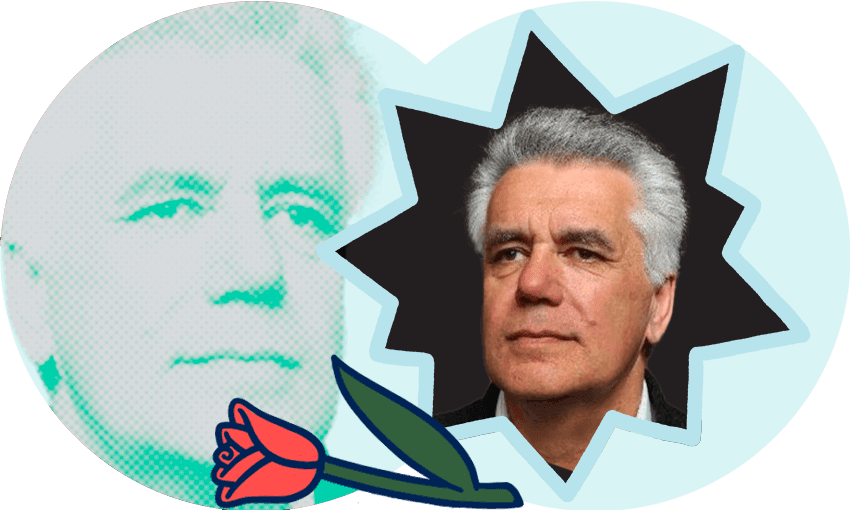 Moana Jackson has left us with the drive to keep fighting

Lawyer and criminal justice reform leader Julia Whaipooti on what revered Māori intellectual Moana Jackson, who passed away this week, meant to her.

My first thought is to his whānau. In his generosity to all of us, he has been all of ours in te ao Māori and te ao Pākehā. He has been our uncle, our rangatira who was so inspirational. His time with all of us is also time away from his whānau. I just want to acknowledge them for holding him, for sharing him with us. And up until his last breath, holding him always.

I know that right up until his passing he was still working. Because the thing that drives him – that’s his greatest gift to me and I think many of us – is his love for our people. And he loved us until he was gone and he still loves us because of the gift he’s left all of us.

I’ve had the privilege to love him and be loved by him – like many people. Speaking for myself, as a young Māori coming through, he’s always had time and generosity for us. It would have been over 10 years ago when I was at law school and he would alway pose the question for us as Māori first year students: “Will you be a Māori who happens to be a lawyer? Or will you be a lawyer who happens to be a Māori?” And at the time I was like, that’s the same question, but as I’ve gotten older, I’ve realised it’s not the same question. I now understand that completely and truly.

Back then, being Māori in law and thinking about our people being locked up and all that kind of stuff – he’s done so much mahi in that space. I remember having a tangi in front of him and being like, “Why has no one done anything about this?” He was very cool and generous.

The year I was born his report came out, He Whaipaanga Hou: Māori and the Criminal Justice System. He wrote that in a time when it wasn’t safe to speak about racism. Today, I could get on Twitter or Facebook and say whatever I want to to racists and it wouldn’t be a threat to my life, whereas in that time and place it was different when you called out those truths. But he fronted that and that’s something I carry with me because I know when I was born that came out.

Many people know his ambitions for constitutional transformations. It’s not just documents, it’s not just papers, it is a way of being and a right to be Māori. It’s about being unapologetically loving and accepting that we should exist. This relationship I think is the true aspiration of all of our tīpuna, both Māori and tauiwi.

That kindness and love, it’s not normal, but it should be normal. And it’s a thing that I have gained under his nurture. I mean, no one can be like him, but I am so unapologetically loving of our people and I expect that at the tables I sit at or the things that I push for. That is a gift I’ve received from him. In all the spaces that I’ve seen him in and despite some of the shit he gets, he can still sit there with such beaming love. Over the years, being close with him, I have learnt that when he is on fire, when he’s giving you a growling but you don’t know it and when he’s responding to things, I can see the difference in the shape of his words and the kaha that he exudes. That’s one of his superpowers – that he communicates gently and with love but also so strongly so you’re almost tricked into changing. You can’t not take in his words.

A lot of his fight and work is around the systemic oppressions, which benefit white peoples and structures. And so that fight is for our own people, it’s also recognising that for immigrants and for manuhiri who come to our whenua, there’s a fight for us to be able to manaaki and provide well, and a lot of that has been taken from our people, because of colonisation. So his reach beyond ourselves is huge. The work he did internationally, particularly with international indigenous peoples and international people of colour. He was one of the founding people around the United Nations Declaration on the Rights of Indigenous Peoples. I went to the UN a few years ago, as a young buck. I didn’t care about the UN before I went there because I felt it was just some irrelevant overseas thing. But his presence over there for the UN forum on the rights of indigenous peoples, and his imprint in that place was huge.

The systems we’re pushing against are oppressive but we also have to work within those spaces. I remember the message of love he sent through, because some of us were just frustrated about the UN being an equally oppressive Pākehā system. And in a way he gave a gentle reminder about how for many of our whanaunga overseas, for many indigenous peoples, this is their only pathway. So we had to uphold that as well, because this was their greatest hope. This is what they thought. And for me the takeaway as well at that time was that as Māori, many indigenous people around the world look to us because we have a treaty, we have Māori in government, our reo is being spoken. We were the aspiration. But what I took from his guidance is that if that is so then we must never think it’s enough. And it’s not enough that our whānau are locked up. It is not enough that our rangatahi are dying of suicide. It’s not enough. We cannot make that enough. If people are looking to us, we must always strive for our rights to exist. Part of that is a relationship and obligation to many of our whānau overseas: that we have gifts to share, we have things to lead and we have things to learn.

He’s a very gentle giant in how he communicates but his words are so potent and so strong. You can’t not be affected or influenced by the way that he thought and operated: very gently but so strongly. Like many of my generation, it’s made me double down on my commitments to things that he could see and he did. Matua Moana and others did that for us so we can see that through for our mokopuna.

There is a moment to pause and mourn for him and his whānau, and we’ve got to share in that loss. At the same time, I’m insanely fuelled to do what he has set out for us to do. So when he talks about his vision for Matike Mai and constitutional transformation, the gift he left behind is something that we will continue to fight for. It’s the right for us to achieve what constitutional transformation could look like in our lifetime. I feel a huge sense of drive that we will continue that work because that’s the gift he has left with us. So the urgency remains, it’s even more strengthened in his departure. He might leave this world ā tinana, but he’s still very much with us.

As told to Charlotte Muru-Lanning