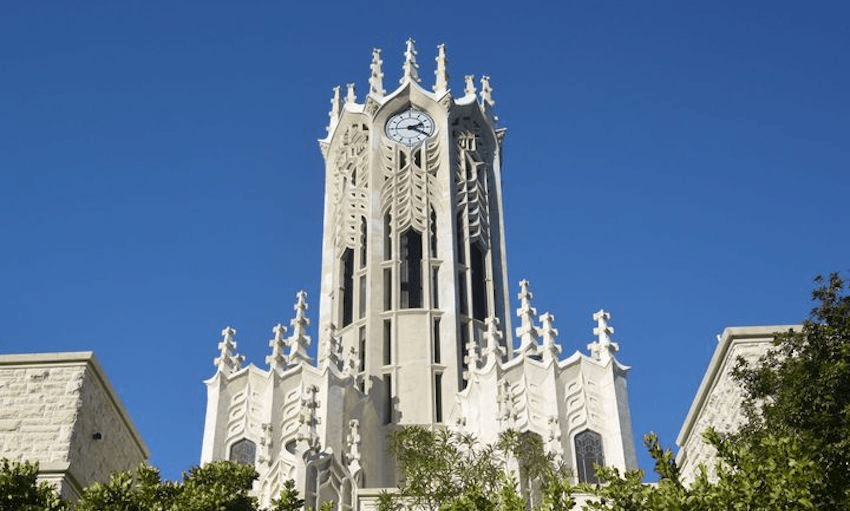 A hui at the University of Auckland today revealed the tip of the iceberg of the institute’s problem with racism and discrimination.

Update 02.05.19: Vice Chancellor Stuart McCutcheon has responded to The Spinoff’s request for comment. His response is below.

The University of Auckland’s vice-chancellor was absent from a hui addressing harassment and discrimination at the institution today, after rubbishing claims of increased white supremacy on campus.

The “Hui against Bullying, Harassment and Discrimination” drew around 70 people to Waipapa Marae on the University of Auckland’s city campus, many of whom shared their own stories of harassment or read some of more than 40 anonymous submissions.

Due to a graduation ceremony scheduled for the same time, there was no show from the university’s vice-chancellor, Professor Stuart McCutcheon, who recently made it clear in a statement that he thought accounts of white supremacy at the University of Auckland were “being conflated by social media and a naturally enhanced sensitivity following the Christchurch mosque attacks.”

A woman spoke on the marae of her Jewish heritage and said she had been confronted by a man while at an anti-racism rally, who was doing a Nazi salute and told her he was a Nazi. She said when she tried to report the incident, she was told the process required this man to know her name.

This system was criticised heavily by those who spoke, the very idea of letting a potentially dangerous person know their name was enough to scare some people off complaining altogether.

Tensions at the hui skyrocketed when the same woman disclosed that the man who had approached her at the anti-racism rally was in attendance.

“Today I stood up in a hui with a neo-Nazi present to tell my story about antisemitism and white supremacy on campus at UoA. I looked him in the eye and told him I would survive just like my grandfather did,” she later said on social media.

The man she was talking about then stood and spoke, claiming her story was rubbish and discriminated against him. Breaching the three-minute limit on speeches he was asked to wrap up before he had finished, but it was clear his ideas were not shared with the majority in the room.

There was anger in the voices of some who questioned why the man was allowed to stay in the room, despite clearly inhibiting the confidence of some wanting to share their experiences.

An anonymous submission asked whether it would take a shooting on campus for the university to take notice of the culture of discrimination that was being allowed to continue. They said sometimes it seemed like being shot would be the only way the university would act.

Another anonymous submission said a tutor had once told them “we don’t do that Māori shit here.”

One student could not graduate because they said the university refused to change the name on their certificate, despite going through the process of getting a legal name change.

The feedback seemed to confirm that discrimination appeared throughout the university on every level, not just with students against their fellows, but with teachers and other faculty also complicit in the harassment, bullying and racism.

In 2015, a video made by University of Auckland students looked at the day-to-day experiences of racism by Māori and Pasifika students on campus. In it, one student talks about a paper where they were asked to compare the socio-economic realities of Ponsonby and Otara. He says the lecturer recommended students go to Ponsonby but when asked why he didn’t encourage them to go to Otara, the lecturer replied: “You’ll need life insurance.”

As one speaker asked today: “How can students be expected to call it out when it’s so deeply entrenched in the culture?”

Student Pearl Little gained attention for wearing a t-shirt with the statement  “UoA: Complicit in white supremacy” to her graduation ceremony on Tuesday. She told RNZ she wanted to remind people of the “white supremacist, alt-right rhetoric that’s been slowly growing in the university.”

Members of the Auckland University Student’s Association (AUSA) promised that in one week they would have a concrete plan of action to target discrimination, bullying and harassment, but as a postgraduate student pointed out, “the amount of effort we make as students to support our fellows is huge, but the university is not doing enough.”

Vice-Chancellor Professor Stuart McCutcheon has responded to The Spinoff’s request for comment, saying he stands by comments he made in the press statement last week. He says two reports are being investigated, but “there is no evidence that these two unrelated incidents constitute what has been inaccurately characterised as a wave of white supremacy at the University.”

“Students and academic staff have the right under the Education Act 1989 to express controversial opinions,” he states.

The AUSA is preparing a report as a result of the hui, and McCutcheon says the university will “consider carefully any recommendations that might be put forward.”