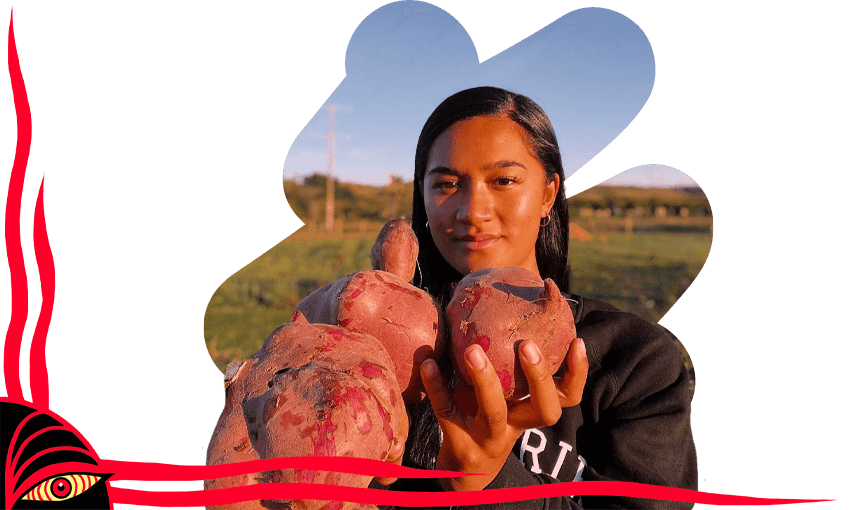 Empowering whānau through māra kai and the maramataka

Meet the young Waikato woman who is using the maramataka and Matariki to help whānau grow kai on their whenua.

Working with the Ministry of Primary Industries as a facilitator for whānau Māori who own land, she’s helping them to put kai on to their whenua.

“I help them get the expertise of MPI in the way of feasibility studies, horticulturalists, any experience stuff,” says Maipi-Clarke.

There are three areas in Waikato territory that are currently being developed, while the main māra kai at Kāhui Tua in Rāhui Pōkeka has been in the works for the last three years.

“We introduce whānau to the maramataka and time if they don’t know of it. From there, we do workshops and then introduce resources,” says Maipi-Clarke.

The māra kai are informed by the maramataka.

Finding a balance between mātauranga Māori and western science, she leans on her elders for their knowledge of unforeseen phenomena and how to respond in a Māori way before bringing in a horticulturalist to gather their insights and share those with whānau.

“It’s about doing what’s best for the māra,” says Maipi-Clarke.

A background in maramataka

For Maipi-Clarke, learning about maramataka is encompassed by a holistic understanding of the wider taiao.

“I’m not a holder of knowledge but I’m a messenger for my generation to navigate mental health with knowledge from our taiao,” says Maipi-Clarke.

Growing up she was influenced by her aunty Liliana Clarke, who is currently doing a PhD around maramataka, while learning through the behaviour of her cousin, Clarke’s son, who has Asperger’s.

“He really went with the maramataka. We could prepare as a whānau when he’d have times when he’d need more help. It was just natural,” says Maipi-Clarke.

However, what really sparked her interest was a collective wānanga on taiao with Rereata Makiha, Hoturoa Kerr, Rikki Solomon and Dr Rangi Mātāmua.

From there, she spent every summer with her aunty, learning through the process of archiving her research, while being exposed to the teachings of knowledge holders such as Pine Taiapa and Rereata Makiha.

In 2020, Maipi-Clarke launched her own resource called Maahina, which seeks to help rangatahi better understand their taiao.

“Maramataka isn’t tapu. It should be spoken about. It should be wānanga’d about. It’s how our tūpuna would navigate when and where to plant kai. Kūmara is ‘noa’.”

She wants tamariki and rangatahi to be more in tune with themselves, to develop the ability to observe their own patterns with maramataka.

“The whole goal is that tamariki in the morning and look at the marama, the whetū from the night before, the sun, the clouds and every little thing, to pick up how their day is going to be or the aspects of their day. What to watch out for or be aware of.”

A passionate advocate for rangatahi mental health and education through maramataka, the 19-year-old paints an indigenous perspective that reflects maturity and leadership beyond her years.

“Maramataka, the stars, the tides of the sea, they’re all notifications in the sky and our taiao. Rather than looking down at our phone, we can look up for free and see our own affirmations,” says Maipi-Clarke.

For the Kāhui Tua māra, the whānau expressed aspirations for a food forest. Utilising their land, they dedicated sections to the various stars of Matariki.

“In Tipu-ā-nuku and Tipu-ā-rangi, those sections have rīwai, kamokamo, kāroti, lettuce, everything from the ground. In Tipu-ā-rangi they’ve got berries, orchards, miro, all the food from above. In Matariki and Rēhua they have their rongoā space, that’s food foraging, kawakawa, kūmarahou and all that,” says Maipi-Clarke.

Looking ahead, one of their goals is to have a space for Waitī by using one of their traditional pātaka kai, lake Waahi, for watercress, kōura and tuna.

“Those are the frameworks that we use for planning, then we incorporate the maramataka and bring a horticulturalist. We don’t provide the tools, shovels, or seedlings, stuff like that, it’s just mātauranga support,” says Maipi-Clarke.

In her role with MPI, Maipi-Clarke has been able to mobilise her community and support them to realise these aspirations for the whenua.

“The next project near Matamata is with Ngāti Hinerangi and Wairere Toi, who already have a work crew and resources, they just need a bit of help with incorporating maramataka and knowledge around growing kai,” says Maipi-Clarke.

Connecting whānau to whakapapa and whenua

The planning, planting and harvesting are all very intentional, reflecting how their ancestors utilised the rich lands throughout Waikato to grow an abundance of produce.

“We’ll usually get a feel for the whakapapa of the whenua. Our tupuna wahine, Whaawhaakia, her descendants are Ngāti Whaawhaakia and she was known for her kūmara,” says Maipi-Clarke.

At Te Whare Taonga o Waikato, there is a carving depicting Whaawhaakia holding a kō, a digging stick used to cultivate soil, with a kūmara basket at her feet.

“So we’re working with the whānau to emphasise their kūmara and we had a planting day of just wāhine who came in to harvest kūmara, linking Whaawhaakia to her descendants,” says Maipi-Clarke.

Ensuring those connections are made early, they invited kids from the local kōhanga reo to plant rōpere and four months later they came back to harvest them.

“We taught them why we were planting at that particular phase, which was Tangaroa-ā-mua. We explained what stars were setting and how the different atua would feed the māra,” says Maipi-Clarke.

Te Wharekura o Rākaumangamanga helps out with working bees when extra hands are needed for a harvest, again reinforcing the ties throughout the community across generations.

Māra kai crates to give back

One of the ideas behind the māra was to enable whānau to pull up their own kai crates for Christmas, so they wouldn’t have to worry about getting kai. However, when the pandemic came along, they had to cancel those harvests for the safety of their people and reduce chance of transmission.

Waahi Pā, a local marae in Rāhui Pōkeka which is also a key stakeholder in this project, acted as a distribution point for the kai parcels for kaumātua and whānau during the pandemic, as well as an MIQ.

“We sussed out Tipu-ā-nuku and Tipu-ā-rangi, with lemons, all the leafy greens, kūmara, potatoes, kamokamo, strawberries, watermelon, dropping them off the kaumātua of Waahi Pā,” says Maipi-Clarke.

This was supplemented by another local whānau who delivered kina, muscles and other kai to acknowledge Waitī and Waitā.

Matariki and the hautapu

One of the sections in the Kāhui Tua māra was dedicated to Matariki, where the whānau put their best seeds in to plant and harvest kai for Tipu-ā-nuku, Tipu-ā-rangi, Waitī and Waitā, to have in their hautapu ceremony.

“This kai wasn’t to be consumed by humans but for atua,” says Maipi-Clarke.

This included kūmara hutihuti, which is a white kūmara that Waikato ancestor Whakaotirangi brought from Hawaiki, reinforcing again that connection to whakapapa and whenua.

Every year, Maipi-Clarke and her whānau aim to upskill themselves to be self-reliant for the hautapu ritual.

Looking back, she says they’ve come a long way from roasted marshmallows on the marae ātea in 2017.

“The next year, we had to bring a waiata and explain how that waiata represented a person who had passed away,” says Maipi-Clarke.

The benefits of the revitalisation of the tikanga are providing an opportunity for those who are dealing with grief to shed some of that weight through the hautapu ritual.

“Our whānau have gone through a lot of suicide deaths, my mates from kura. So it’s getting in contact with our whānau pani and telling them to come to hautapu and let go of that mental baggage,” says Maipi-Clarke.

“I think everyone is keen to acknowledge and celebrate it, sometimes whānau might get shy because they don’t know how to do a long karakia, so it’s catering to them with different options of how you can celebrate Matariki and different activities.”

They learnt different variations of Matariki throughout Waikato before starting their own hautapu ceremony, now by harvesting their own kai they’re an exemplary model for others to follow.

“We could have gone to the supermarket and bought them but we wanted that aspect of growing them specifically for our atua,” says Maipi-Clarke.

With the focus on planting and harvesting being driven by the purpose of cultural ritual and connection to whakapapa, Maipi-Clarke has high hopes for a circular Māori economy based on kai.

“Hopefully in years to come we’ll be exchanging kai rather than moni for kaupapa Māori,” says Maipi-Clarke.

In the long run, after looking after her own backyard, she hopes to help other iwi get māra kai established while supporting them with knowledge around the maramataka.