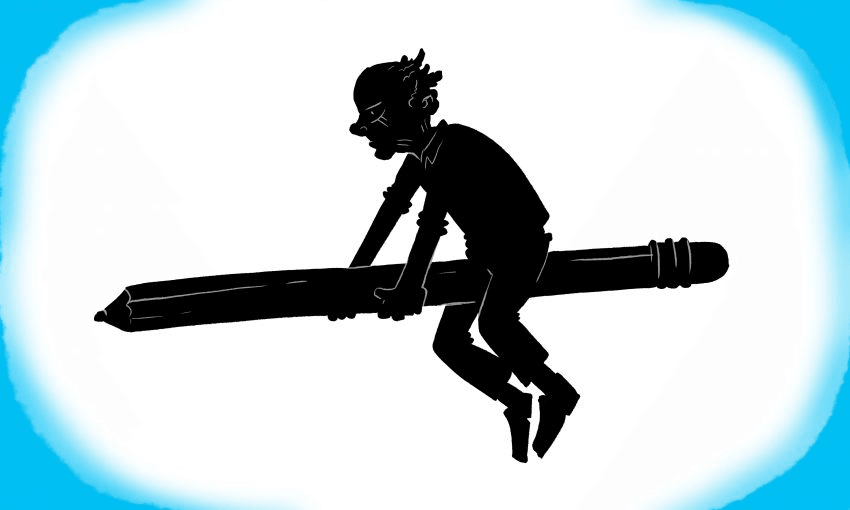 Today dawned like any other. My cat jumped on the bed and started coughing up a hairball. I forgot to get a new towel before jumping in the shower and had to do the hallway streak of shame. I wore odd socks for the fourth day running.

Little did I know the day would bring such joyful news that my legs would do an involuntary celebration dance.

Stuff cartoonist Al Nisbet announced the media giant will no longer be publishing his work.

The contentious cartoonist draws cartoons that regularly punch down at Māori and Pacific people, women and those in poverty. It is always framed as ‘saying what we’re all thinking’ without much knowledge or research beyond that, and rigorously defended as ‘free speech’.

Nisbet has been a thorn in the side of a media outlet that, at least in my perception of it, is otherwise trying it’s hardest to talk about the harm done, historically and presently, to marginalised people. Their dedicated #metoo reporting unit is placing the lived experience of women and gender-diverse people who have been sexually assaulted and harassed in overwhelming numbers on their homepage. This extraordinary Treaty of Waitangi multimedia resource makes plain with data and empirical evidence what so many have attempted to deny.

He has held them back. You can’t talk about the importance of the Treaty while elsewhere in the organisation the principles of partnership it seeks to represent are being trampled on by a bigot.

In the saddest exit interview of all time, Nisbet told NewtalkZB’s Chris Lynch: “These days there seems to be a tsunami of lefty thinking which totally doesn’t appeal to me as a cartoonist. You’re meant to look at all angles.”

That he thinks framing the #metoo movement as a witch hunt (a metaphor he used very badly) is showing ‘all the angles’ of a story denies the fact that sexual assault is a prevalent, ubiquitous part of women’s lives that has remained underreported since the dawn of time. Hundreds of women have contacted Stuff to report their experiences. In scientific terms, you can draw some pretty solid conclusions from a sample size that big. That’s not an angle, it’s a fact.

He went on to describe his cartoons as “more retro than old fashioned.”

“[Stuff] are trying to push a lefty agenda,” he told Lynch. “Everything’s lovely, everything’s wonderful. We don’t want to point at the truth of anything I’ve been saying cos that’s not right, you know, not PC.”

“I even said to the editor when she rang me up to tell me I was no longer needed ‘I may as well go and live in North Korea, cos I think we’ll have more free speech’.”

Chris Lynch had the decency to meet that with a brief, stunned silence.

Unfortunately for Nisbet’s lefty agenda conspiracy theory, Stuff cartoonists Trace Hodgson and Mike Moreu were also reshuffled out of the organisation a few months ago – both are proud lefties (if by Nisbet’s definition a lefty is someone with an actual soul) who have thus far not announced any plans to move to North Korea.

Which tends to suggest it is simply a cost-saving decision, part of a wider reshuffle, and not Stuff making a stand on the kind of values they want to project in the media landscape. But whatever. I’ll take it.

He labelled other cartoonists as ‘cutesy’ and ‘pathetic’, presumably meaning Tom Scott and Sharon Murdoch whom he called out as ‘lefties’ later in the interview, and whom Stuff have retained.

My favourite part of the interview has to be the mispronunciation of ‘feminazi’, which draws out the word to sound like ‘naasi’ and is a wonderful representation of all the words and concepts Nisbet clearly does not understand (hear the glorious pronouncement at 07:44), foremost being the concept of free speech.

So here are a few articles he can read up on now that he has some more spare time on his hands:

Paradox, utopia and Don Brash: on liberalism and free speech

Whakawhanaungatanga, not censorship: A Māori perspective on ‘free speech’

Hate speech is not Free speech

Don’t let the door hit you on the ass on the way out.