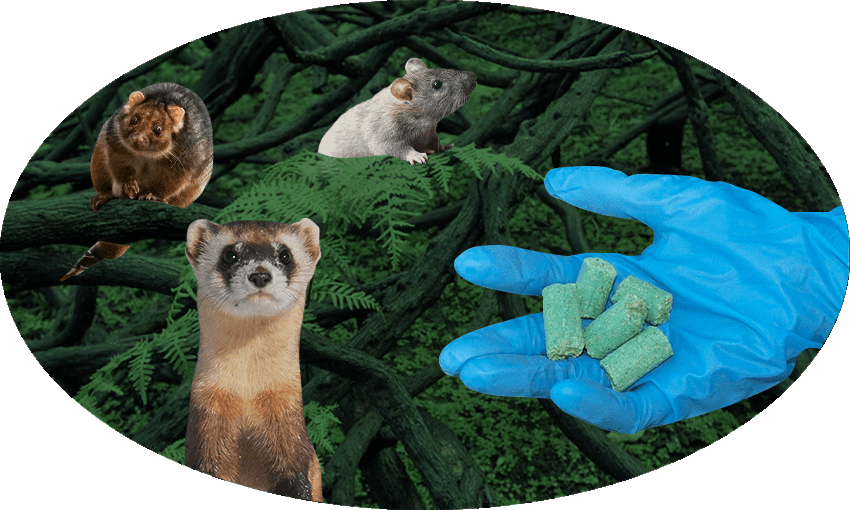 Is poisoning pests the Māori way?

Some of those opposed to the use of 1080 poison to control pests say it’s ‘un-Māori’. Tame Malcolm unpacks these claims, arguing that to the contrary, protecting the environment is at the heart of whakaaro Māori.

When it comes to animal pest management in Aotearoa, there are a few controversial topics. Simply asking about some of these on social media can erupt into full-blown debates. For example, will we eradicate possums, stoats and rats by 2050 as per the predator-free government’s goal? Should cats be controlled? Should deer and pigs be considered a pest or a resource? Should Aotearoa look to gene-editing technology?

But in my opinion, none is more controversial than the use of 1080 toxin to control pest species, which has spawned countless rallies and protests by the small number of those opposed to it, not to mention damage and threats caused to those who support 1080’s use.

Amid the noise of the 1080 debate is one message that I absolutely loathe – something along the lines of “you are not Māori if you support 1080!” There’s only one answer to such a nonsense notion: if you have whakapapa Māori, you are Māori.

Some opponents, meanwhile, say that using 1080 isn’t a Māori way to manage pests. Is there a specific way of doing Māori pest management? Is it following traditional tikanga and kawa to control pests? Is it using the ways of our tūpuna, ie pre-European Māori approaches? Or is it simply just being Māori and managing pests?

I think we can all agree that trying to define a “Māori” way would be difficult. Māori culture has evolved from the time when our tūpuna left Hawaiki, to their arrival in Aotearoa, the hundreds of years spent living in this ecosystem, European arrival and colonisation, right up to now with all this new technology.

So what is it about the use of 1080 toxin that is deemed un-Māori? Is it the fact that it’s using a toxin to kill an animal? Some say that adding a poison to our whenua is unnatural, and therefore un-Māori. But Māori history and culture has many examples of toxin use. Kawakawa, for example, was used to kill insects. A known insecticide, it would be buried in the ground around kūmara gardens – adding poison to the whenua to deter insects.

Some readers may be thinking “kawakawa is from our whenua, whereas 1080 isn’t”. But the active ingredient in 1080 – sodium monofluoroacetate – can be found naturally occurring in pūha in small amounts.

At some pā sites around the country, meanwhile, our tūpuna would line their kūmara pits with rarauhe (bracken fern). Kiore that would try to burrow into the kūmara pits would have to gnaw through the toxic plant to get to the kūmara, thus get poisoned.

Another aspect of the use of 1080 often called upon as an example of being un-Māori is the fact it gets into water. Now, the science shows that 1080 breaks down in water very readily, and what’s more, toxins in water were not something foreign to our tūpuna. In some iwi, tūpāpaku were buried in lakes and rivers. This would result in a rāhui being placed on that area, and, for physical and spiritual wellbeing, no food or water was to be taken from there.

As you can see, our tūpuna were no strangers to toxins. They knew how to mitigate the effects of toxins in plants like karaka, which could then become a food source, and would also translocate ongaonga – stinging nettle – and place it in areas from which they wanted to deter unwelcome visitors.

Recently, there was research into using the toxic native tutu species as a toxin. Not only did the research show it was possible, but it also garnered interest from Māori communities who were keen on using our own mātauranga to address the pest problem.

Some have argued that the mass killing of pests that comes with using 1080 toxin is also un-Māori-like. But this argument doesn’t really hold up, in my opinion, because our tūpuna would catch large quantities of fish using nets. Tāruke (crayfish traps) and hīnaki both operate on the premise of catching en masse.

Perhaps it’s the fact that 1080 results in large quantities of dead lying around. Again, this is not something new to our culture. After battles, our tūpuna would lay out dead bodies, such as on the large rock Te Aroaro o te Rangi Ka Awatea on Mokoia Island in Lake Rotorua, where the dead were splayed out to dry.

Then there are those who argue that using 1080 means whānau can’t go into the forest, and that access to the forest is our right as Māori. This argument forgets that rāhui were commonplace for managing resources, as well as protecting the people and the mauri of the forest.

Finally, there are some who claim the use of 1080 isn’t whakaaro Māori because it means whānau can’t be employed to trap. This argument confuses me because at its heart, it’s putting people’s needs first: that is, the need for employment is the first consideration. If I have learnt anything from my kaumātua and whānau, it’s that the environment is number one. If you don’t take care of the environment, it will not take care of you.

So I end by saying that perhaps the most Māori way I can think of to manage pest animals is to put the needs of the environment above the needs and wants of humans. After all, it was human greed that got us in this mess.