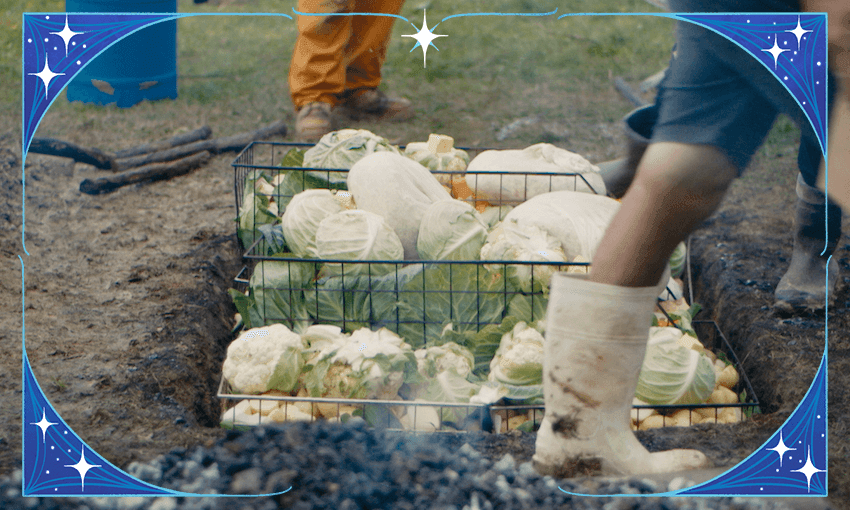 In a whāngai i te hautapu ceremony food is cooked in a hāngī or umu and when the oven is uncovered the steam of the food rises to feed the stars.

In a whāngai i te hautapu ceremony food is cooked in a hāngī or umu and when the oven is uncovered the steam of the food rises to feed the stars.

The recognition of Matariki with a public holiday is a huge moment for Aotearoa. Simon Day got some advice on how to mark this special time.

Standing outside in my bare feet, staring up at the clear morning sky, I followed the stars from the familiar Tautoro to the left to find the Matariki cluster. This was the first time I’d ever actually taken the time to locate the nine stars that have so much significance to Aotearoa, and are once again receiving the recognition they deserve. I buzzed out wondering about my tīpuna doing the same thing hundreds of years ago, as they looked to the stars for guidance.

When we celebrate Matariki on Friday, June 24, Aotearoa will dedicate a day to mātauranga Māori. It will be the first time tikanga Māori is officially recognised by the colonial calendar with a public holiday. And according to the research of Dr Rangi Mātāmua, the humble superstar of the Matariki movement, the official recognition will make Matariki the first reintroduced indigenous holiday in the world.

“I never in my wildest dreams thought we would get to this place where we would take a day to stop as a nation to acknowledge mātauranga Māori,” Mātāmua told the crowd gathered at Te Tākinga marae in Rotorua at the Kupu Māori Writers Festival at the weekend.

“We no longer need to look overseas to reflect our identity. We have identity and culture here, we’ve always had it, and it’s connected to everyone. There isn’t a single individual who doesn’t come from people who looked up to the stars to understand who they are.”

You do you (plus three key ideas)

The momentum of Matariki feels like it has real significance for Aotearoa’s appreciation of mātauranga Māori. But while this year Matariki has received more attention than ever and the campaign to teach New Zealanders about its history and traditions has been overwhelmingly successful, when it comes to how to celebrate Matariki, many people still  aren’t sure where to start. Personally, I felt a lot of pressure to make this Matariki authentic and perfect. But I didn’t really know what that meant or what I was looking for from it.

Listening to Mātāmua speak on the marae that evening, I realised celebrating Matariki is really quite easy and beautiful: you do you!

There are three key ideas that underpin Matariki and they’re the best place to start in informing how you celebrate and shape your own traditions. The first is remembering those we have lost in the last year and the legacy that they leave us. The second is celebrating the present and the people in your life who fulfil you. Like the stars of the Matariki cluster who rise together, this is a chance to gather as a group and celebrate who you are. Third, Matariki is a time to look to the future with hope and set a fresh intention for the year ahead.

“Matariki is about celebrating who we were, who we are, and who we want to be,” says Mātāmua.

“Spend time with the people that are closest to you. Sit down and have a meal together and get to know each other. Do what works for you. Go with what your puku tells you to do. Say what’s in your heart. There’s no wrong way of doing it. The main thing is you do it with the right intentions.”

I’m using Matariki to explore my whakapapa and ensure my two-year-old twin boys are aware of their tīpuna. We’ve been meaning to create a photo wall of our family since they were born. Matariki was the push we needed to finally hang the photos of our whakapapa.

It’s the perfect time to learn about mātauranga Māori. I’m starting by trying to learn the names of the nine stars of Matariki and their different roles. So far I’m confident on six (even the mighty Rob Ruha failed his pop quiz at the Matariki awards). And I’ve learned a new phrase in te reo Māori – Mānawatia a Matariki, a salutation or greeting to honour and welcome Matariki. (It rolls off the tongue much more nicely than “Happy New Year”.)

When Matariki gathers in the sky, the stars are calling people to gather on Earth. At The Spinoff we’ll be having a shared lunch. Working in the media is a pretty hectic environment at times – especially during the last two years – and this is an opportunity to just hang out with each other over some delicious kai and celebrate the work the organisation has done.

We’re lucky to be eating hāngī cooked by chef Luke Adams that’s being put down early that morning as part of a whāngai i te hautapu ceremony. I’m heading along to lend a hand with the mahi and it will be the first time I’ve got up in the early morning to observe the Matariki cluster.

The traditional ceremony has three parts. The first is te tirohanga, where tohunga (cultural and spiritual leaders) observe the stars to understand the forecast for the following year’s harvests.

During te whakamahara i ngā mate the names of those who have died in the last year are called out to the stars. In te ao Māori, Te Waka o Rangi is formed through a constellation that connects Matariki at the stern with Tautoru (Orion’s belt) at the bow, and is captained by a star called Taramainuku. Each night throughout the year as the sun goes down and the constellation is seen, Taramainuku drops his net and trawls for the souls of those who died that day. And when the cluster disappears in May, the waka is taking the dead into the underworld to be prepared. When the constellation returns to the night sky aligned with the Tangaroa lunar phase for the Matariki period, Taramainuku is said to cast the souls into the cosmos where their spirits become stars against the chest of the sky. It’s a moment to reflect on the people we have lost through the year, to sever the tapu we have with the dead and release that burden.

“We don’t forget them. They are always there looking down on us,” says Mātāmua.

Because many of the stars in the Matariki cluster are associated with food, the third part of the ceremony – te whāngai i ngā whetū – is about feeding the stars. Food from each of the environments represented by the stars – the earth, the forest, the sea, and freshwater – is cooked in a hāngī or umu and when the oven is uncovered the steam of the food rises to feed the stars.

If you can’t have your own whāngai i te hautapu, tune in to basically any TV station to watch the official ceremony from Te Papa from 6am-12pm. It’s pretty cool to see mātauranga Māori interrupt the entire broadcast schedule for six hours.

Whatever you do, be sure to celebrate. Mātāmua has received many concerned messages asking about what is appropriate for Matariki, concerned about the tapu and sacredness of the day. His advice: once the moment in the ceremony to release the dead is complete, everything else is a celebration.

“If it’s enjoyable, get out there and do it. Celebrate how you want to celebrate. Make it your Matariki where you are,” says Mātāmua.