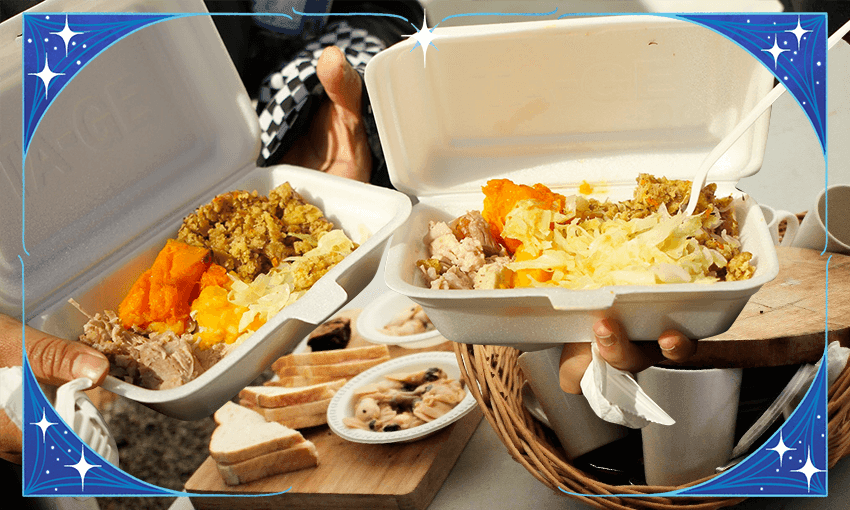 For a long time, traditional Māori practices around kai have been sidelined. Charlotte Muru-Lanning reflects on how Matariki is a reminder to reconnect with the food our tūpuna ate.

Many of us have grown up immersed in the maramataka, and marking the Matariki cluster’s ascent with early morning karakia and steam rising from hāngī as an offering to the stars. But a big bunch of us, till now at least, have probably felt a little disconnected from the seven or nine twinkling whetū of Matariki.

Te ao Māori is becoming increasingly visible in our everyday lives as revitalisations around language, tikanga and history continue to flourish. Matariki is one of many manifestations of mātauranga Māori in Aotearoa, and 2022 marks the first year that it’s being recognised with a national public holiday. That means while this year’s Matariki might be a continuation of tradition for some, for others it will be about finding a way to reconnect. And as we gaze to the sky in hope of catching a glimpse of that cluster of stars, many of us are also traversing the expansive universe of kai Māori.

We often talk about food in terms of identity and relationships, as a way into cultures – both our own and of others. While it should never stop at the kai, growing up somewhat detached, food has often felt like the most accessible way for me to reconnect with what it means to be Māori. Knowing how to gather tuangi, enjoying more “difficult” delicacies like kina, fish heads and kaanga wai or learning about our endemic edible flora and fauna has given me an entry point into other aspects of te ao Māori.

It’s always been a lens through which I understand the world, so within this newfound embrace of Matariki, I was eager to figure out what exactly I should be eating during this period. After conversations with multiple researchers and historians this week, rather than create some codified Matariki menu, I’ve been inspired to instead approach Matariki as a signal to go beyond what I know about the food of Aotearoa.

For our tūpuna, astronomy was interwoven into the fabric of everyday life. The appearance of Matariki in the early morning sky in winter marks the Māori New Year, or Te Mātahi o te Tau. It invites us to reflect, to remember, to set intentions. It is a time of year that marks changes in our environment – a change of seasons. The constellation is a sign to hunt or harvest, a signal of shifting relationships between the elements and weather, and an indication of what the year will bring. There are explicit links between the phase and kai.

For that reason, what we eat on Matariki is significant. Matariki traditions are derived from differing perspectives and relationships with the environment, and the meaning of Matariki differs from place to place – in some parts of the country you can’t even see the cluster. The traditions around Matariki and kai are as diverse as the many hāpu and iwi across Aotearoa.

Much like other aspects of our culture, kai Māori has been devalued in Aotearoa since colonisation. Coupled with the fracturing of mātauranga through our colonial education system and assimilationist state policies, knowledge of Māori kai hasn’t always been passed down or accessible. Land alienation, urbanisation and the destruction of ecosystems have meant that it can be extremely impractical for us to go and gather kai using traditional practices. And it would be remiss not to mention that for many Māori, inequality has meant that getting any kai on the table – traditional or not – has been made challenging.

Perhaps the best reflection of how our kai has been excluded from our national food identity is the history of food media in Aotearoa. We certainly don’t need cookbooks to tell us we have culinary traditions, but they’re useful. Cookbooks have long been used to establish cuisines and cement culinary traditions, and Māori cooking has largely been absent from New Zealand’s cookbook history. In the book from Kai to Kiwi Kitchen, food anthropologist Helen Leach noted that historically, New Zealand cookbooks “simply ignored Māori ways of cooking” and sometimes even portrayed “Māori cookery as uncivilised and alien in its own homeland”.

The first cookbook featuring Māori cooking was published in 1908, but it wasn’t until the 1970s Māori renaissance movement that Māori women began to publish their own recipes in printed cookbooks for Māori readers. Leach explains that these cookbooks did more than “disseminate cookery instructions – they simultaneously asserted mana Māori and Māori identity”. They helped give shape to how we see Māori food, and thankfully helped to create momentum for an ongoing revival of Māori culinary traditions. The proof is in the (steamed) pudding – think of cookbooks like Kai Time by Peter Peeti, Kai Ora by Anne Thorp, Cooking with Charles Royal or most recently, Hiakai by Monique Fiso or both of Karena and Kasey Bird’s cookbooks. Cooking shows on Māori Television and even social media pages like Kai Māori on Facebook have helped to fill in the gaps. And last week, our local iteration of Masterchef platformed traditional Māori ingredients and techniques in a Matariki cooking challenge.

Beyond food media, and perhaps far more significantly, the knowledge of kai Māori resides in memories that are passed down. This week, I spoke to kaumātua and local historians about their memories of food associated with this time of the year.

Ngāi Tūhoe filmmaker and lecturer Robert Pouwhare told me about how kererū would have been harvested by his people around this time of year in Te Urewera. “There were special ceremonies and rituals and certain people were allowed to go and harvest,” he said. “There were strict protocols and rules around taking the bird – and in those days the birds were numerous.” Women would eat certain parts of the bird, while men would eat others.

Chef and researcher Joe McLeod (Ngāi Tūhoe), meanwhile, said, “People have forgotten what our food tastes like” and we’ve been “severed from what we knew”. To counter that, he’s “pushing to reconnect our marae and hapū with that knowledge” and believes Matariki plays a huge role in reforming those links to what our tūpuna ate. He’s excited about the fact that so many of the resources available to Māori thousands of years ago are still here, including “19 types of indigenous pūha”.

For Ngāti Wairere historian Wiremu Puke, “winter kai Māori is the kai I used to have as a kid which I don’t have any more”. He listed kaanga wai, kaanga piro, kōura mara, tī kouka – “which is like a big spring onion” – pua – “a type of Māori bread”, tuna pāwhara and kūmara kau, “which is a kūmara dehydrated in the hāngī”, as examples of traditional food we could bring back.

“There’s a lot that’s worthy to be reintroduced. Even today’s modern stomachs amongst our rangatahi generation may not be used to it,” Puke says. And, he adds, “it would be good to look at our traditional kai throughout the whole year. What were our traditional foods? When were they prepared? When was the best time to gather food?”

These are the kinds of conversations I want to keep having about food. Our knowledge and taste for our own kai may have been severed in many ways, but it’s not permanent. Matariki offers us a time to reflect on those food traditions alongside the interpersonal connections that go with preparing and consuming kai at this time of year.

Just like looking at the stars, I think about how when I eat an oyster freshly shucked or smoked tuna, I’m eating something exactly as my ancestors would have. When I eat boil up, steamed pudding or blackberries from the garden of our whānau homestead, I’m eating something pretty close to what my grandparents and great-grandparents would have eaten. It’s just one aspect of our mātauranga to reconnect to. As Matariki helps us see the night sky through the eyes of our tūpuna, it also gives us an opportunity to taste food as they would have.