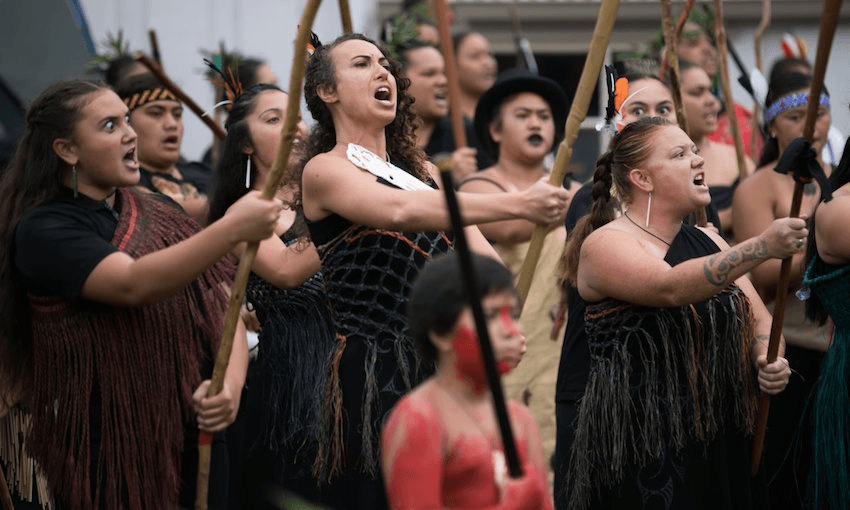 Haka pōhiri at Haratu Marae for the National Day of Remembrance on 11 March in Russell. Image: RNZ

Do we need a national day of remembrance for the New Zealand Wars?

Haka pōhiri at Haratu Marae for the National Day of Remembrance on 11 March in Russell. Image: RNZ

The arguments for a national day to commemorate the New Zealand Wars are strong, but each iwi also has its own case for holding it on a separate date, writes RNZ’s Shannon Haunui-Thompson.

Many believe that for a true process of education, reconciliation and healing, the larger national day has to prevail.

Te Pūtake o te Riri means the motivation or the reasons why people went to war. This is the term given to the national commemorations of the wars and conflicts in New Zealand.

On 11 March this year, the first national commemoration day was held in Kororāreka/Russell. The remembrance day started on Maiki Hill with the raising of the Whakaputanga flag, on the pole made famous by the Ngāpuhi chief, Hōne Heke, who chopped down the pole flying the Union Jack on three occasions in a symbolic gesture against British rule.

Then a procession of hundreds walked through the streets of Kororāreka, retracing the footsteps of those who fought on the same streets 173 years ago.

A group of warriors led the march. They performed three wero and laid down three taki, with each accepted by government ministers and military representatives. The march briefly stopped at Christ Church for a prayer, to remember those who died in Russell in 1845 and lay wreaths for those soldiers buried at the church.

Then a haka pōhiri at Haratu Marae shook the town of Russell awake, just as the gunfire did 173 years ago. Formal speeches and accounts of the New Zealand Wars were given to top off a weekend of events which included visits to the battles sites at Ōhaeawai and Ruapekapeka Pā. It was hailed as a great success by those who attended who were treated to up-close and personal iwi accounts of the battles fought in Northland.

Ngāti Hine leader Pita Tipene said the date of 11 March 1845 was important for the iwi because the conflict that happened on that day in Russell was the catalyst for the rest of the battles in the north that followed, including at Ōhaeawai and Ruapekapeka.

Five years after the signing of te Tiriti o Waitangi, rangatira of the north had been unhappy with how they were being treated. They had been stopped from trading and prevented from entering places where they once roamed freely. Pita Tipene shares his knowledge of the attack.

“Kawiti and Pūmuka attacked Kororāreka from the southern end of the town, and while that caused the diversion Hōne Heke went up Maiki Hill and cut down the flag. Now, the battle raged around the church pretty much all day and there was a lot of loss of life. Eventually the town of Kororāreka was evacuated and everyone left by sea and evacuated down to Auckland where they stayed until reinforcements came from Sydney. Then the real battles really began.”

That initial attack and the symbolic gesture of cutting down the flag was the reason 11 March was chosen by the commemoration events’ first hosts, Ngāpuhi.

However, that decision ran counter to the plan to hold the national commemoration on 28 October, the anniversary of the signing of  He Whakaputanga – the Declaration of Independence – in 1835. That date also has great significance because the battles were about more than land. For many on both sides, the conflict was about authority and sovereignty.

Mr Tipene is also on Te Pūtake o te Riri National Advisory Panel, and said 28 October was not an appropriate date for Ngāpuhi as the first hosts of the commemorations.

“The 28th of October in the eyes, minds and hearts of the people in Taitokerau is a very special day, and that was the signing of He Whakaputanga, the Declaration of Independence, so we said the 28th October is not appropriate for us and given we’re the first hosts we chose March 11th.”

The decision did not seem to cause any upset, but there were those who believed the commemorations should be held on the same day every year to have the intended national significance.

For years, many iwi have been commemorating their tūpuna who were killed in those battles.

It was at those regional commemorations, especially the Battle of Ōrakau, where the idea for a national day of remembrance started.

Otorohanga College students then sparked a nationwide petition which they presented to Parliament in 2015.

One of those students, Waimarama Anderson, told those who attended the inaugural national commemoration they had been shocked at their lack of learning and knowledge of the battles in their own area during a field trip.

“When we witnessed the grief of our elders, we realised it was shameful that we didn’t know our connections with such formative history. We were learning about parallel events far away, but we did not know anything about what had happened in our backyard.”

Mr Tipene agreed, and said New Zealanders had to understand and know the stories of the battles and conflicts that happened here in Aotearoa to move on as a nation.

“Some people don’t even want to know these stories, they are still saying ‘why are these people aggrieved? Why do they get treaty settlements? Why they are they getting handouts from the government? Why are the Māori looking so lazy, and why do they fill the prisons?'” he said.

“To really understand why probably all indigenous cultures, who have been oppressed, are still in poor socio-economic conditions – there is a key theme running through all of this that oppressed people do not have poor statistics because they just want to, there is a good reason for that – understanding all that is important as we move forward as a nation.”

Next year the commemorations are being hosted by Taranaki iwi and the nation will be looking to them to see where future lies.

This article first appeared on RNZ. Listen to the full Insight documentary here.