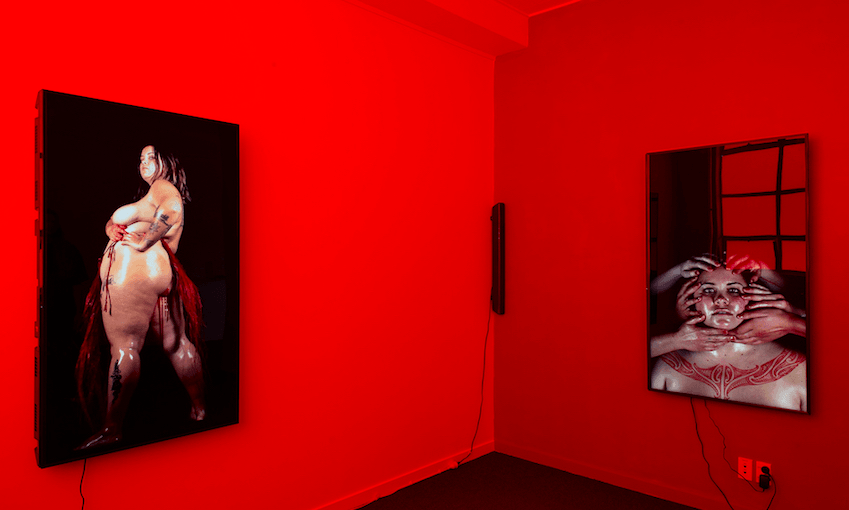 The angry brown woman: My issue with art schools

Art schools are seen by many as beacons of liberalism. But is this the reality? Former student Anna McAllister recounts her fraught journey through art school.

This piece was first published on The Pantograph Punch.

In high school, the only subjects I was remotely good at were the practical arts. I stayed in the art block during lunch, and dropped any non-art-related subjects as soon as I was able to. At university, fine arts was the only degree that made sense, and six years later I left with a bachelor’s and master’s degree, both with first-class honours. To be honest, I’m tired.

The time I spent studying was vital in my hīkoi of reclaiming Māori knowledge, lost through intergenerational colonisation. For many Māori, university can be the first opportunity they’re given to deeply and critically understand this country and its troubled history. It is a shameful fact that most of us finish our public education with little to no awareness of the history of colonisation in Aotearoa and the impact it continues to have on Māori. Shout out to the New Zealand schooling system for not teaching us any of this while we were in primary or secondary school. Given that I was attending art school, this exploration was done through both art making and essay writing.

In the last two years, I have been able to solidify what my artistic practice looks like. Like many Māori artists, my practice is wide: I am a performance, video and installation artist, a poet, academic, researcher, protest organiser and healer. Some of this mahi doesn’t fit within the Pākehā institution – that is expected. I was ready for that, I was prepared to have my work met by silence and confusion. I was prepared for a lot. But evidently, not as prepared as I ought to have been.

Throughout my master’s, I refused to quiet myself for the comfort of Pākehā as I had in undergrad. The results were revealing. This wasn’t a conscious decision, I think it was because I was older, more confident; or maybe because I was more jaded. My first interaction with the Master of Fine Arts programme was at an information evening held on campus. While talking to a high-up Pākehā woman from the programme, I showed her what kind of art I had made as an undergrad student. She then asked me something which, now looking back, set the scene for my entire master’s experience. She asked me, “So, are you going to keep doing the angry brown-girl thing?”

I could end this essay here, and that would be enough to warrant some serious discussions around our art schools and just how ‘liberal’ they really are. But, of course, it didn’t stop there. As the only Māori student in my year, I was repeatedly asked to perform cultural acts such as karakia. Just maybe, after I say no the third time, stop asking me.

At almost every meeting I had with one lecturer, he would ask why I was pulling “that face”. It would set the tone for the entire meeting. I felt that I had to make an extra effort to be nice, smile and laugh at his dry jokes. I was told that the male lecturers had had a discussion about me and whether or not they thought I was a bitch.

The wāhine Māori in the year above were also labelled “bitches” and spoken about by lecturers. I was warned not to be like them, otherwise no one in the art world would want to work with me. I know that this essay may give me that label. That in the unspoken code of the art world, speaking up like this is not just not supported, but discouraged. But, like many wāhine Māori before me, I’m not afraid to break rules made to break wāhine like me.

It got to a point where I knew I had to decide where the line was and what I was not willing to ignore. This was my most challenging experience. There was a particularly difficult classmate, whose art not only misappropriated Māori culture but acted violently towards Māori and Papatūānuku. When I critiqued this student (an exercise that is practised regularly among students in art school), I was asked to be “less mean” and do it with more “aroha”.

After this encounter I was treated as a pariah and labelled as the angry brown woman. But I was also asked to help educate him. When his actions became increasingly violent, I asked the faculty to do something about it and was questioned by the same professor who had wanted me to have more “aroha” as to why I didn’t go and “scream and yell at him”. Critiquing a Māori woman for being ‘too mean’ and ‘not mean enough’ within the space of weeks shows the impossible standards we as wāhine Māori are held to.

This all happened within my major hand-in period. The experience of not only having to deal with a racist student but the lecturers then failing to support me, ultimately broke me. I have moved away and decided to take a year-long break from the art world. Some of our best graduates are so beaten down by tertiary institutions that they stop, they have to heal. Which means that for some, doing our Master of Fine Arts is hurting us. This fact should terrify the arts community in Aotearoa. And we should expect our art schools to do much better.

These are just a few examples of the structural inequity that trickles down to the pastoral care of Māori students. And although I do not think that any of these actions were performed with malice, they do show that even with the best possible intentions, art schools and their staff members can be problematic.

There were positive aspects of my studies. In particular, the mahi put in by the wāhine Māori lecturers was astonishing. For example, I wanted to put breaks of whakatauki, mōteatea and creative writing in my thesis, but was advised against this by most of my lecturers, because it was “unnecessary” and “too disjointed”. They were unable to recognise the validity of me decolonising my writing in this way. They centred the importance of the ‘flow’ of my thesis in Western academic terms as opposed to Māori oral traditions.

However, when I took this idea to a wāhine I had access too, I was told without hesitation that it made perfect sense. That my decision was valid and my reasoning was clear. This shows how invaluable these kaiako are, who act as a central pou for Māori students, and can validate the importance of rejecting Pākehā academic norms. They are the difference between a student having the confidence to follow their ideas or being beaten down by a system that not only does not understand them but doesn’t respect them. Pākehā often approach Māori writing or art with a lack of intrinsic understanding. For them to understand the underlying topics and reasoning they have to decolonise their ways of thinking.

While Māori students in art schools will face the odd malicious interaction, it is the institutional and systematic racism that we grapple with. We can’t place art school on a pedestal while its attempts at equity and accountability fall short. It’s the institutional equivalent of the liberal bro who thinks he’s woke as fuck cause he knows bell hooks but has no idea who Leonie Pihama, Linda Tuhiwai Smith or Ani Mikaere are.

For wāhine Māori, if we are to value ourselves, we have no option but to decolonise our minds. If Pākehā, and tāne Māori, are expected to tautoko wāhine Māori in art schools, then they must be made aware of the inherent racism and colonial sexism that has infiltrated their hinengaro. I can say with no hesitation that without the few Māori women at my university, I would not have made it through the degree. For them and the ridiculous amount of work they do, I will always be grateful.

The Pantograph Punch publishes punchy arts and cultural commentary in Aotearoa New Zealand, from personal essays to criticism, interviews and analysis.
26th May, 2022