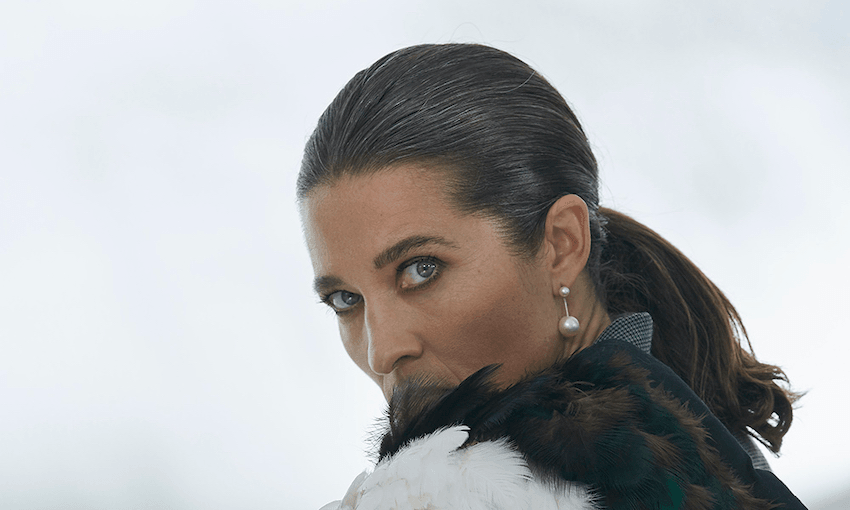 Chelsea Winstanley is ready to write her own story

The Aotearoa-born, Los Angeles-based producer of What We Do in the Shadows and Jojo Rabbit is back home to direct her own film – and reconnect with the culture that made her, she tells Stacey Morrison.

Chelsea Winstanley (Ngāti Ranginui) has seemingly effortless style – she’s a woman who stands out whether on the Oscars’ red carpet, or in a T-shirt in a managed isolation hotel. The Māori new year, heralded by Matariki, has just risen when I speak to Chelsea in Auckland, and it’s clear that an exciting new chapter has begun for her too. After her two week quarantine, Chelsea has hit the ground running, exuding an inspiring energy that appears to ping off her exceptional cheekbones.

Home to direct Toi Tū, Toi Ora: Visual Sovereignty, a documentary about contemporary Māori art, Chelsea has also recently been announced as a new member of the producer’s branch of the Academy of Motion Picture Arts and Sciences, the Hollywood organisation that holds the annual Academy Awards.

With a self awareness that’s been hard-earned, Chelsea is ready to carve her own path and author her own stories. “It’s really important for me to do that, because if I don’t I’ll always be ‘the wife of’ or ‘the ex wife of’ – that will be my label,” she says.

Many women feel the weight of how society wishes to define us, and it’s not hard to imagine that working in the Los Angeles movie scene would exacerbate that pressure. Yet Chelsea is a Māori woman who draws strength from her identity and whakapapa, so she felt literally wrapped up in aroha from Aotearoa when she wore a bespoke Kiri Nathan gown to this year’s Academy Awards, where she was nominated for Best Picture as a producer of Jojo Rabbit. Chelsea says she was blown away when the Auckland-based fashion designer reached out to her and made her feel “so humbled, and so loved, to have a Māori design, from home”.

Having never had a gown made for her before, Chelsea says she was so worried about whether she had measured herself correctly that she also sent photos, so all bodily features were fairly referenced. “I have zero boobs, I mean, I don’t even make the alphabet!”

Yet Kiri’s elaborate woven design detail, paired with gold jewellery Chelsea’s sister had selected, was such a stunning look that Chelsea was stopped all night by Oscar-goers complimenting her gown and declaring ‘THAT is the dress of the night”.

Featuring on best dressed lists across the world, including in Vogue, Chelsea shone. Still, she believes she was just radiating the aroha she felt coming from home. Finalising details together, Kiri and Chelsea had exchanged videos and messages online, with tips to use wig tape to secure the dress, and even how to pose to ensure the pockets on the gown were highlighted “but to have my thumbs out, or it would look like I didn’t have hands”.

Reflecting on an incredible night and a stunning gown created by the magnificent @kirinathan thank you Queen for creating this beautiful dress. Oscars 2020 congrats @jojorabbitmovie @taikawaititi thanks mum for being my date! ❤️ thank you @cannonballandtilly the jewelry was on point!!!!

Working through the hype of Hollywood in a typically Kiwi way, Chelsea says her publicist has helped her understand the importance of embracing promotion to enhance perception, as part of the machine. Still, she’s staying grounded. Before Kiri Nathan made her offer to create her Oscar gown (which is set to be displayed in Te Papa), Chelsea had planned to find something at her favourite vintage store in Los Angeles, Cannonball & Tilly.

Having been introduced to the shop by a fellow wahine Māori living in the area, Chelsea was drawn to the store’s array of vintage gowns, ‘90s cosmic numbers, shoes and bags. Their colour and texture drew her out of her stylistic shell, she says, noting that she can find shopping for new clothes daunting.

She tells a story of gently turning down a kind styling offer from a Hemsworth in favour of a vintage gem from the store.

“We were going to the premiere of Thor and Chris Hemsworth said ‘what are you going to wear?’ I said I didn’t know and he said ‘don’t worry I’ll sort my stylist to help you and take you to the shops, have you ever had that?’ I said ‘No don’t worry bro, I’ll be all good, I’ll go to my vintage store!’

“It was so sweet, and his stylist helped me out, but in the end… I went back to that vintage store. I got a one-shouldered dress because it was actually the best, even next to all these women in fancy dresses, everyone was like ‘damn’ and even the stylist who had originally dressed me said ‘that’s the best, that’s better than what I had put you in’. It was so sweet.”

Chelsea’s sister Janine is the stylist she’s happiest relying on. Janine has been a creative influence ever since she made Chelsea’s first school production stage outfit for the story of Hatupatu. “She’s super creative, and can make anything in to art,” says Chelsea of her sister, who styled their mother to accompany Chelsea to the Oscars.

Having grown up in Mount Maunganui, moving north to go to Auckland Girl’s Grammar was a style revolution too, arriving in the city as a “beach chick, long hair with a skirt down to my ankles and roman sandals”.

At her new school Chelsea quickly realised that above-the-knee pencil skirts and Andrea Biani shoes were a more acceptable look, following the lead of stylish girls in her class like Tiana Epati (now president of the Law Society and still a close friend), who were already putting clothes from Zambesi on lay buy.

Chelsea is happy to follow in the footsteps of inspirational women. Her mentor Merata Mita, regarded as the godmother of indigenous film in Aotearoa, was a huge influence on her work, leading in 2018 to Chelsea producing the documentary Merata: How Mum Decolonised the Screen. Now available on Netflix, the documentary showed at the Sundance Film festival where it was picked up for distribution by Ava DuVernay’s production company. Merata Mita died in 2010, but Chelsea says her wairua (spirit) continues to comfort her in tough times.

While Chelsea had planned to be in New Zealand this year to make her documentary, the delays caused by Covid-19 have meant she and her former husband Taika Waititi needed to make new plans for their daughters, Chelsea’s youngest two children, who will now join her in Aotearoa when their dad’s work on Thor: Love and Thunder in Australia gets the go-ahead.

Adapting to a pandemic and finding a way to complete passion projects has made for some guilt-inducing decisions. “I feel guilty about pursuing dreams, that I’m not that mum interacting with the school at the moment, the general mother guilt of working, and of course you know there will be some consequences of that”.

She says she’s looking forward to ensuring her girls reconnect with their Māori culture and language when they come home.

Chelsea knows about resilience: she has openly shared her story as a sexual abuse survivor, and says moving to America was a catalyst to truly look at the scars of her past, and actively engage in healing her inner child.

As part of that journey, she hasn’t drunk alcohol for two years. “I knew I had to stop drinking because I was so determined to meet the woman I wanted to be. I knew she was there but I couldn’t quite get to her, that drinking was just in the way, and I had to find that strength.”

It started a raft of healing, and one of Chelsea’s current priorities is “wrapping my arms around my son” who is now 23. He was born to her as a young single mum, when she had to juggle motherhood with tertiary study and putting food on the table.

Chelsea is returning to one of the skills she honed at university as director of Toi Tū, Toi Ora: Visual Sovereignty. The documentary follows preparation for Toi Tū Toi Ora: Contemporary Māori Art, the largest ever single survey of Māori art, curated by Chelsea’s whanaunga (relation) Nigel Borrell. The exhibition opens at Toi o Tamaki, Auckland Art Gallery, on December 5.

She felt strongly that ‘sovereignty’ had to appear in the documentary’s title. The importance of story sovereignty, and visual sovereignty, is something that producing has taught her, she says. No matter who we are, we have to have control over our intellectual property, and our own stories; telling them our way.

Returning to directing means Chelsea is embracing the creativity she hasn’t always been able to express as a producer. Now, feeling strong in her own authorship, Chelsea Winstanley is home, and giving herself permission to write her own story, and rejoice in all women doing the same, in their own unique way.

“Don’t ever think that you can’t be the brightest star of Matariki, whatever that might mean for you. If you give yourself that permission to believe and have the imagination to just soar and see where that takes you.”