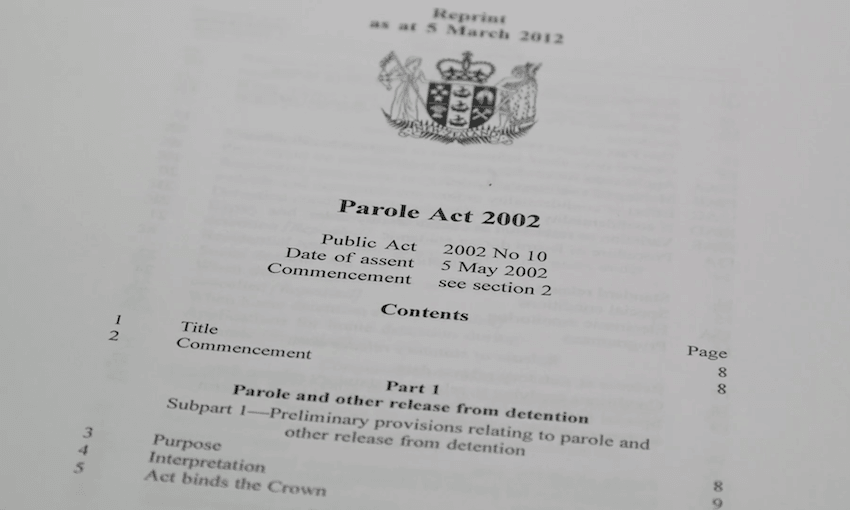 The prison and remand systems, courts and police have an institutional racism problem that sees Māori imprisoned at an alarmingly high rate. The Parole Board are no different.

A response from the New Zealand Parole Board is at the bottom of this piece.

This was a major theme in the recently released He Waka Roimata report from the government’s Safe and Effective Justice Advisory Group. In the report, the Parole Board came under considerable criticism for its unfairness, punitiveness and lack of transparency. However, newly published statistics gathered through the Official Information Act paint an even darker picture of the Parole Board.

One of the final steps of the journey through the criminal justice system is usually an appearance in front of the New Zealand Parole Board. The Parole Board is responsible for deciding whether or not a long-term prisoner is ‘ready’ to be released from prison.

Statistics released to me under the Official Information Act about these decisions over the last 17 years are a shocking indictment of the Board. The statistics clearly demonstrate how the Parole Board acts as a crucial cog in the machine of institutional racism and mass incarceration of Māori and Pacific communities.

Given the Parole Board works in a system that is more broadly institutionally racist against Māori, it’s unsurprising that Māori are much more likely to serve their full sentence than Pākehā. In 2018, Māori made up 58% of the people who served their full sentence. In the same year, Māori were approximately 51% of the total prison population. In other words, the Parole Board adds another level of institutional discrimination. At the big picture level, the Board is taking a prison population that is disproportionately Māori and locking up Māori for even longer once they are in prison. For our women prisoners, the situation is even more concerning. In 2018, Māori women made up 84% of all women who served their full sentences.

Read more: Innocent until proven guilty? Not if you’re Māori, poor or homeless

As a fundamental principle of liberal democracy, we are taught that justice is blind and that all people are treated equally. This is not the case for the Parole Board or the criminal justice system generally. The consistency of the institutional racism across the criminal justice system is remarkable, although unsurprising. Māori are more likely to come into contact with police (and have force used against them). They are also more likely to be arrested, prosecuted, remanded in custody, found guilty, sentenced to imprisonment (and for longer).

As the statistics above also show, the Parole Board extends the effective sentence of Māori compared to Pākehā by simply granting them parole less often. The Parole Board is another injection of adrenaline into the racist criminal justice system.

However, some New Zealanders are simply not concerned by this apparent breach of the principles of equality of justice. For them, their fear of crime, stoked by groups like the Sensible Sentencing Trust and its friends in the media, is overwhelming. As a result, they see no issue with people spending longer in prison, even if it plays out in a racist manner.

While their fear for safety is valid and should not be dismissed, racist mass imprisonment is no solution to it. We should all be concerned by our racist criminal justice system. As I have written about elsewhere, this present government, along with preceding governments, has funnelled billions of dollars into a prison system that undermines public safety and increases the likelihood of violent crime.

On top of the exorbitant costs, longer prison sentences do very little to keep our communities safe. Scientific studies have consistently shown that longer sentences do not act as a deterrent. Prisons are also ineffective at rehabilitation. Often, the purpose of denied parole is to provide the person with more time to rehabilitate. This is a pointless use of resources and causes unnecessary suffering when the evidence consistently demonstrates that rehabilitation is most effective outside of prison.

While this is a system that disproportionately affects Māori, it hurts us all. We all pay the cost of a broken criminal justice system that throws money into cages and fails to keep us safe. It is also not only Māori who suffer from this senseless lengthening of prison sentences by the Parole Board. Since 2010, Pacific people have been even less likely than Māori to be released on their first Parole appearance, although they reached parity in 2018 as Māori parole success rates fell more rapidly than Pacific rates.

This crisis also affects Pākehā, although to a lesser extent. In 2010, Pākehā were released on first appearance 26% of the time. By 2018, that had reduced to 16.8%. In other words, while our racist criminal justice system disproportionately affects Māori and Pacific communities, poor and working class Pākehā are also swept into the increasingly punitive system, while we all pay the costs.

It may be tempting to argue that the worsening institutional racism of the Parole Board is caused by a few bad apples on the Boards. It is possible that there are some members of the Board who hold racist attitudes toward Māori. However, magnitude of the racist outcomes of Parole Board hearings is simply too great to be blamed on a small number of members. There is a much wider, institutional issue at play.

That being said, even the Parole Board as an institution is not entirely responsible for these issues. While it takes racist prison statistics and makes them more racist, it also acts within a legislative framework that was enacted with the purpose of making it harder to be granted parole. In other words, much of the blame for this racist system is in the hands of the 120 members of parliament. Their previous action or current inaction have worsened this crisis. It is only through radical, sweeping change that the profound injustice of this racist system be addressed.

Ti Lamusse is a PhD Candidate in Sociology at the University of Auckland, studying the New Zealand Criminal Justice System.

The New Zealand Parole Board makes public safety decisions based on risk, not race.

Offenders do not apply for parole, and the Board does not choose which cases come its way. An individual’s parole eligibility date is set by law. The Board only sees offenders serving sentences of more than two years, once a third of the sentence is served or the minimum non-parole period has passed.

There are many factors which determine the point in time when an offender can be released on parole. These generally include (but are not limited to) completion of rehabilitation programmes, progress on reintegration activities, availability of accommodation, and availability of employment. Above all, the Board’s benchmark legal test is whether an individual poses an undue risk to the safety of the community.

This article does not provide the full picture about offenders seeking parole. Sadly, many Māori offenders appear before the Board with some or all of the following risk factors:

As well, some offenders’ attitudes towards rehabilitation can be ambivalent, and post-release plans can be inadequate. These factors increase the likelihood of risk, explaining why parole can take that much longer to achieve in some cases.

Over-representation of Māori is a concern across the criminal justice system, and that concern is certainly shared by the Board. The Government’s Safe and Effective Justice Advisory Group, Te Uepū, recently highlighted this issue and the Board stands ready to play its part, while maintaining public safety.

The Spinoff is wrong to claim that “longer prison sentences do very little to keep our communities safe”. 47 percent of those sentenced to two years or less in prison are reimprisoned within two years of release. Parole is not legally available to these offenders. However, those sentenced to five years prison or more are reimprisoned at the significantly lower rate of 17 percent within two years of release. This proves that the managed oversight of parole is vital to reducing reoffending.

Our Board membership comprises 45 experienced, considerate, diverse professionals who together share one of the toughest jobs in the country. They are selected by the Attorney-General for their unique skills and expertise. These 45 experts respect the mana of all offenders regardless of race, background, or any other demographic. I want to publicly acknowledge the tireless, unsung role they fulfil on behalf of all New Zealanders.