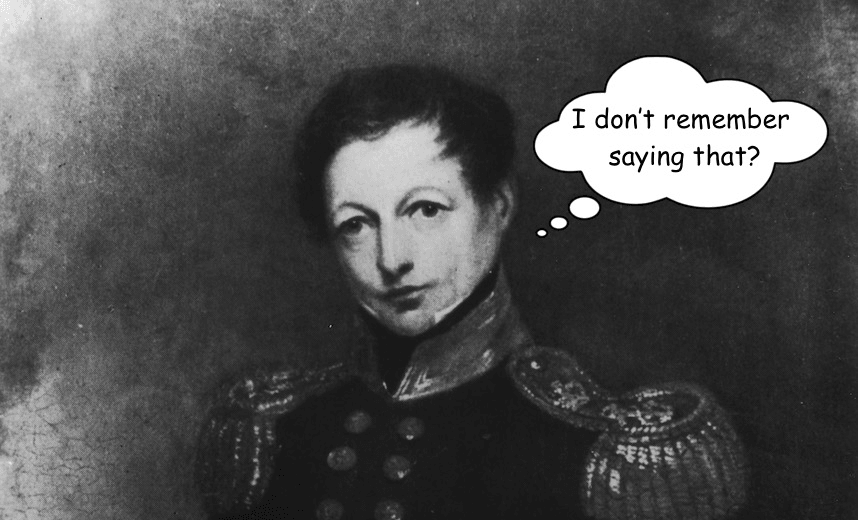 CIRCA 1840: British naval commander William Hobson (1793-1842), circa 1840. Hobson was appointed as first governor of New Zealand and negotiated the Treaty of Waitangi with the Maori chiefs, which granted England sovereignty over the country. (Photo by Hulton Archive/Getty Images)

Debunking the ‘one people’ myth: a historian on the invention of Hobson’s Pledge

CIRCA 1840: British naval commander William Hobson (1793-1842), circa 1840. Hobson was appointed as first governor of New Zealand and negotiated the Treaty of Waitangi with the Maori chiefs, which granted England sovereignty over the country. (Photo by Hulton Archive/Getty Images)

Māori historian Dr Danny Keenan explains why it is highly unlikely William Hobson ever made his famous ‘pledge’.

Great play has been made by anti-Māori Pākehā on a statement attributed to Lieutenant Governor Hobson at the signing of the Treaty of Waitangi, that new settlers and Māori ‘were now one people’.

But did Hobson ever say such a thing?

New Zealand history is fraught with myth – things that never happened, or at least, the evidence is sketchy. ‘Hobson’s pledge’ is one example. Was there ever such a thing?

During the signing of the Treaty of Waitangi on 6 February 1840, we are told, Lieutenant Governor Hobson shook hands with each Māori signatory, saying ‘he iwi tahi tatou – we are now one people’. But did this actually happen? Where is the evidence?

The account of ‘Hobson’s pledge’ comes from William Colenso, a mission printer who was present at Waitangi on the day of the Treaty signing. His version of events can be found in his The Authentic and Genuine History of the Signing of the Treaty of Waitangi, published much later, 50 years after the event, in 1890. This was nine years before his death aged 89 years in 1899.

Other accounts however do not mention Hobson saying such a thing, or anything like it. It’s not recorded by anyone else that such sentiments were expressed; instead, what caught the attention of most Pākehā observers was the rancour and discord evident amongst Māori, and the suspicion directed at Hobson.

Forty-five chiefs signed the Treaty that day, but few of them, says Colenso, were of ‘first rank’. And none were present from any distance, save a small number from the Hokianga.

Earlier, Colenso had asked Hobson was he sure Māori knew what they were doing, by signing the Treaty? Did they understand the Articles? Hobson’s reply, the expression of quite a different sentiment, was that if Māori don’t understand, then this was of no concern to him.

Meantime, says Colenso, other chiefs like Marupo of Wanaurara, and Ruhe of Ngāti Hineira were urging Māori not to sign, as indeed, by some accounts, was a clearly ambivalent Hone Heke Pokai. Such was the level of disagreement amongst Māori on that fateful day at Waitangi.

Later accounts of the signing

Colenso’s account of Hobson’s statement does not appear in earlier accounts of the Treaty signing, written by other Pākehā who were present.

Missionary Richard Taylor’s account of 1840 does not mention any such statement, nor such sentiment, being expressed by Hobson. Instead, he wrote of the hostility shown to the governor by Māori.

William Baker’s account of 1865 also fails to mention Hobson’s supposed statement. Baker was a translator for the Native Department who was asked to provide an account for parliament, which he did, on 8 July 1865.

Baker’s overriding concern was the discord and disagreement amongst Māori – a war of words which had provoked a crisis, threatening to derail the signing ceremony. Even Hobson himself did not mention his supposed ‘pledge’, instead recalling that he had been opposed by Māori with displays of ‘great violence’.

Was there ever a ‘Hobson’s pledge’? This seems unlikely. The evidence for it is confined to the recall of one participant, written down some 50 years after the event.

Colenso’s account is also written in verbatim style, with dialogue recorded in detail, a precise if unlikely remembering of minutiae and nuance, some 50 years after the event, through years of intervening, turbulent history.

Colenso’s record of events, then, is structured around remembered – or invented – conversations, written for effect rather than accuracy. Some popular historians use this method, it is true, but you wouldn’t get away with it in your PhD thesis.

It’s worth bearing in mind that, by 1890, when Colenso published his account, Māori had lost the New Zealand Wars. They had had thousands of acres of land confiscated, or alienated through the Native Land Court.

Māori had seen their communities decimated by settler economic encroachment and their population numbers had fallen to about 40,000, from a high of about 100,000 in 1840. The evidence for this is of course overwhelming.

However, in 1890, Colenso would have had good reasons for presenting Hobson as a benevolent figure, conciliatory to Māori because, by then, New Zealand was in the grip of a new Pākehā nationalism.

Scholars like Edward Tregear and William Pember Reeves were searching amidst the literary and figurative landscapes of New Zealand, which they saw as empty, looking for an organic foothold for Pākehā amidst the undergrowth.

They were trying to recapture the heady days of the young F E Maning, as described in his book Old New Zealand (1863) – a time when Pākehā were few, carefree, and felt as if they belonged, even if they were living under the sufferance and mana of Māori, which they were happy to do.

A resurgent literary nationalism propelled this search for an organic foothold forward. New journals like the New Zealand Graphic and Ladies Journal aimed to foster and assist this revived sense of belonging amongst Pākehā.

Native Associations were established all over the country, comprising Pākehā determined to secure their space, and place, here in Aotearoa. They adopted a new organic ensign, the silver fern, to symbolise their new-found attachment to the otherwise desolate landscape.

Inventing an early regard for Māori

It therefore served Pākeha nationalist purposes to portray Hobson, and the Crown, as always having been well-meaning and benevolent towards Māori from the very beginning.

Despite everything, said Colenso, Pākehā had really meant well.

Such a newfound regard for Māori absolved Pākehā of the ravages inflicted on Māori since 1840 on the way to a new sense of Pākeha identity, hegemony and nationhood. Inventing a ‘Hobson’s Pledge’ served a useful purpose.

But to most Māori, as to many discerning Pākehā, this all rang hollow, as it does today.

Danny Keenan lives in Whanganui and has a PhD in history from Massey University. He is the author of the recent biography Te Whiti O Rongomai and the Resistance of Parihaka.