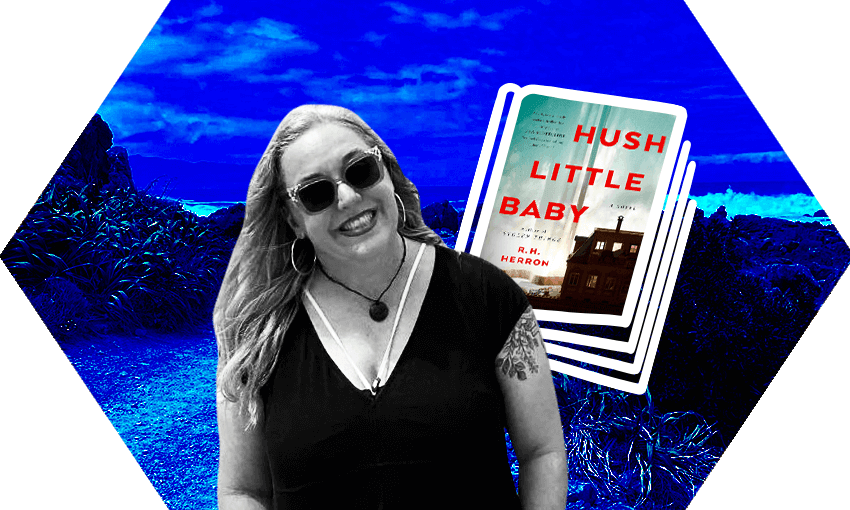 The new novel by the Pulitzer Prize-winning author of Caleb’s Crossing, People of the Book, and March. The Washington Post gives explanation and praise in a nutshell: “In 2019, a PhD student in art history rescues an oil painting of a racehorse from a pile of discarded stuff on a Georgetown sidewalk, and a zoologist finds a skeleton marked ‘Horse’ in a Smithsonian attic. In 1850, an enslaved boy is present at the birth of a foal. These are the ingredients with which Geraldine Brooks begins her new novel, ‘Horse,’ and, goodness, they are just as beguiling as her fluid, masterful storytelling.”

Local gush-worthy memoir about Noelle McCarthy’s relationship with her mother and with alcohol. We’ve heartily taken part in said gushing.

Tragically obvious joke incoming: Auckland is in the habit of buying this book.

The debut – queer – Māori-inspired – fantasy novel by Pōneke writer Sascha Stronach. We recently published a review by Tamsyn Muir, who writes about the defying of expectation that all fantasy should be set in medieval Europe:

“Kiwi-written fantasy had to escape New Zealand in order for its readers to relax – and if it didn’t, it was bravely signalling to the world that it too did not intend to escape New Zealand. It was own-brand. For Kiwis only, perhaps dreaming only to diminish; to get on the Sir Julius Vogel longlist, and remain Galadriel.

When I first opened up Sascha Stronach’s The Dawnhounds, my first thought was, ‘Oh, my God. He’s actually going for it.’”

Muir goes on say, “This is dreamy, drugged-up, enormously imaginative New Zealand slipstream. The Dawnhounds is everything that the new generation of NZ SFF could and should be.”

Debut novel by rapper Coco Solid aka multi-media artist Jessica Hansell aka co-director of Onehunga community space Wheke Fortress aka someone whose book you should definitely pick up.

A history of Russia that is hugely relevant today. A little excerpt from the Guardian: “‘Tragically for both countries,’ Beevor writes of Germany’s incursion, ‘it gave German nationalists the idea that European Russia and Ukraine should become their colonial possessions in the next war.’ The idea, of course, that Ukraine was a colonial possession of Russia was already established and, as we know, has not gone away.”

This award-winning New Zealand novel is a staple of the bestsellers by now – think mashed potatoes, but with a bit of cleverness and kick; a drizzle of horseradish on top, maybe, and a sprinkling of lemon zest and mint. (We do not recommend this as an actual recipe. It is for simile purposes only, and would likely be unpalatable. Unlike Greta & Valdin.)

8  The Song of Achilles by Madeline Miller (Bloomsbury, $25)

A superb 2011 novel that’s become a bestseller once again through Book Tok.

Murakami’s most recent book of short stories, now smaller and cheaper at $24.

She wakes to the sound of breathing. The smaller children lie tangled under coats and wool blankets, their chests rising and falling in the dark. They have yet to stir. Their sister is always first. She looks around the room, seeing only silhouettes – the faint trace of a chin or brow, lit from the street below. Mice scurry across the floor. Roaches crawl to the ceiling. A little sink drips and drips, sprouting mould from a rusted pipe.

A few feet away is the yellow mop bucket they use as a toilet, and the mattress where the mother and father sleep, clutched. Radiating out from them in all directions are the eight children they share: two boys and five girls whose beds zigzag around the baby, her crib warmed by a hairdryer perched on a milk crate.

They have learned to sleep through anything. They snore with the pull of asthma near a gash in the wall spewing sawdust. They cough or sometimes mutter in the throes of a dream. Only their sister Dasani is awake.

Christ on a bike – these Wellingtonians are still out a-walking.

Still out a-decolonising their imaginations, too.

By the title alone, you know this novel by US-turned-Wellington writer Rachael Herron is gonna be creepy.

The publisher’s blurb verifies this: “[Jillian’s] wife, Rochelle, has left her while Jillian is pregnant with Rochelle’s biological child, and she feels constantly unsettled in her now-empty house – items missing from their usual place, burning candles she can’t remember lighting, the screen from her bedroom window removed … Could Rochelle be gaslighting her in order to claim full custody of their daughter? Or, worst of all – is Jillian turning into her own mother, and imagining all of it in some sort of subconscious sabotage against her unborn child? When the missing items turn into unambiguous threats, and as the circle of those she can trust continues to dwindle, Jillian knows only one thing for sure: she will do anything to protect her baby.”

Herron is a writing teacher and on the writer’s board of NaNoWriMo. She is an established romance writer, specialising in “knit-lit” – she’s also written a well-received memoir, A Life in Stitches, full of stories “inspired by something she knit or something knit for her”. She was brought up in the US with a Kiwi mum and though she spent plenty of time in New Zealand never officially lived in the country until a year ago, when “the States finally broke us and my wife and I sold our house in the San Francisco Bay Area, left all our family and friends and moved to our dream city, Wellington, where we live with a view of the harbour – and we LOVE it.”

Hush Little Baby is her second thriller and, she promises, features no men.

5  Matariki Around the World: A Cluster of Stars, a Cluster of Stories by Rangi Matamua & Miriama Kamo (Scholastic, $35)

A beautiful illustrated hardback of stories, newly published in time for Aotearoa’s first year of celebrating Matariki as a public holiday. There are 18 stories included, nine about the Māori Matariki stars, and the rest from other cultures including the Pacific Islands, the Americas, Europe and Africa.

7  Aroha: Māori Wisdom for a Contented Life Lived in Harmony with our Planet by Hinemoa Elder (Penguin Random House, $30)

A superstar of a novel that we loved to bits, written by expat New Zealand author Meg Mason. In a recent interview with the Guardian, Emilia Clarke (aka the Mother of Dragons) said that Sorrow and Bliss was one of her top lockdown novels: “My mate Lola wanted to borrow it and I’ve never been so reticent to hand a book over. I was like, ‘No, no, you don’t understand, this has got my soul inside it.’”

(She means reluctant, yeah we know.)

A 2018 bestselling novel that has just come to cinemas near you – as a film, we mean.