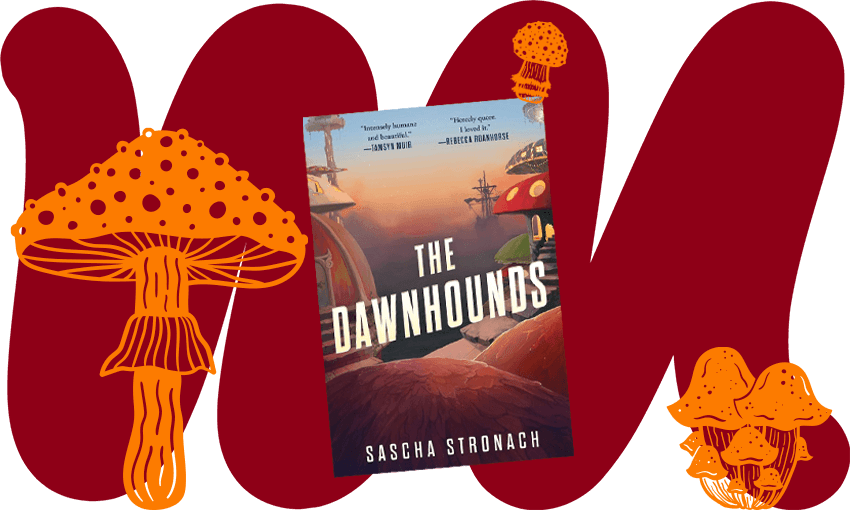 By Tamsyn Muir
Guest writer
Made possible by

What does the quintessential fantasy city look like, and why is it a cod-medieval London – or sometimes Paris, or sometimes Venice? Why indeed is the “fantasy setting” a vague mishmash of Europe during the Hundred Years’ War, as written mostly by people who don’t know what the Hundred Years’ War involved? How can some writers tap so unselfconsciously into evocative fantastical worlds that draw on their own countries’ histories and culture, and yet others reach into the toybox for the blessed and much-worn Fantasy London, with its mismatched sets of kings, knights, elves and dragons?

It’s a difficult question to answer. One might as well ask why so many Regency romances are less interested in the English Regency than they are in writing pastiches of Georgette Heyer. Dungeons & Dragons has helped create a kind of extruded fantasy product that was wafted around near a bottle of Ye Olde Medieval Tymes and retains an interesting-bits-filed-off Tolkenian cast of elves, dwarves and halflings. Growing up, I certainly assumed all fantasy had to look like this and be written like this, even if you weren’t English. Maurice Gee’s world of O was an interesting poser. Susan might have fallen into the shadow world from the South Island, but O itself feels interestingly shorn of explicit New Zealand signifiers. I thought I understood why as a child: it would have been naff otherwise. As much as I loved watching Suzy Cato, I understood that she could never have the international glamour of Sesame Street. Kiwi-written fantasy had to escape New Zealand in order for its readers to relax – and if it didn’t, it was bravely signalling to the world that it too did not intend to escape New Zealand. It was own-brand. For Kiwis only, perhaps dreaming only to diminish; to get on the Sir Julius Vogel longlist, and remain Galadriel.

When I first opened up Sascha Stronach’s The Dawnhounds, my first thought was, “Oh, my God. He’s actually going for it.”

Soon I stopped patronisingly thinking about how brave it was and started thinking about how good it was. The Dawnhounds is a homecoming for New Zealand fantasy. Certainly it stands on the shoulders of extant Kiwi giants, but it is part of a brave new generation that is sticking its middle fingers at the American SFF market and fighting copyeditors for every single Australasian phrase or idiom.

It’s not easy. I once had a drag-out fight with an American editor over the word graunched. This is the same market that viewed Philosopher’s Stone as needing a translation to Sorcerer’s Stone so as not to trouble any American reader with reaching for an encyclopedia. Our opening perspective in The Dawnhounds is gulls, wind, and sweating like “a pig in a cookpot”; tāngata ferro-tattooists, and a ship called The Fantail. Is there any creation story more particular to New Zealand than a crew struggling to bring a boat ashore?

The scene is Hainak – “the mismatched city, the ragtag city, the city of walls and gardens.” In originality it reminds me of Mark Helprin’s New York from the magical-realism Winter’s Tale, which is a New York of boiled owls and ice. I can recognise New York because everyone with a television set has had an observational apprenticeship to New York. Hainak, though, is whatever you as a New Zealander bring to it – for me, it was Wellington and Auckland all at once, but thoroughly its own and all of New Zealand at the same time – a city that is technically its own island.

Our heroine is Yat Jyn-Hok. Yat is a cop who loves the city and who has watched it change with the advent of alchemical technology to a place she barely recognises. The heresy-hunting Cult of Crane has its stranglehold on the government and most of the police. She gets through her days with smokes and tinnies. The question of citizen or cop runs throughout The Dawnhounds: Yat is simultaneously criminal and copper – an ex-thief, she comes from circumstances she can’t really escape, and her sexual preferences (likely bisexual, though Stronach doesn’t rely on clunky modern terminologies) leave her in a perpetually liminal state. If she’s caught again with the wrong gender in the wrong club, her whole career will be on ice. She has to keep clear of the puritanical Bird Cult – the bin chickens! – but Yat couldn’t steer clear of disaster if you put her on rails.

I fell in love with Yat immediately. Rarely do women get to be the heroes who try to keep their heads down and fail so spectacularly. Yat is high when she shouldn’t be high. Yat doesn’t make good choices. Yat falls headlong for the wrong women. Yat hallucinates long-dead lovers and goes to raves and yet can’t shrug off being a cop. Paraphrasing The Wire, Yat gives a fuck when it is not her turn to give a fuck.

“Heroes,” drawled Wajet. “You know – sword, armor, fight a taniwha and all that.”

Yat does not like clever-dick questions from her superiors. Eventually, she gives the reluctant: Taniwha gotta be fought. Yat inevitably learns a lesson about fighting taniwha herself, though again, not an easy or pat lesson. She gets involved in a murder case – sees ghosts – gets shot. Don’t worry, this is in the first hundred pages. Death only begins Yat’s tale of mad gods, myth-making, and crime. It ends in what is nothing less than Stronach offering up a new fantastical, syncretic pūrākau in the same way Tolkien offered Middle-Earth as a new English epic.

Pirates who talk in “Reo Tangaata”; taniwha, fungus – quite serious fungus – election years, flesh-eating acids, tinny houses, a city recovering from war and revolution and in a more macro sense, apocalypse. Nothing here feels shoehorned in. There is no sense that this is the 1990s Book Awards and we are hoping to impress people with a little bit of homegrown fantasy. Stronach isn’t assured: he just is – this is a book that fundamentally does not care if you want it to be Kiwi or not. It isn’t trying to slip under the radar in hopes of an American paycheque. This is dreamy, drugged-up, enormously imaginative New Zealand slipstream. The Dawnhounds is everything that the new generation of NZ SFF could and should be.

There are a number of New Zealand stalwarts working within the American markets of SFF. They’ve been there for a long time and their names would be familiar to many. But there’s still a sense that they’re on the literary equivalent of their OE – getting some short-form experience abroad before they come home and write a Kiwi Novel, sold through a Kiwi publisher to a Kiwi market. You can’t just write a Kiwi novel and then sell it to the Americans; they wouldn’t be interested, surely. When my science-fantasy quadrilogy was released in America, I waited until the third book to reveal that it was explicitly Kiwi at all – and had to dig in my heels whenever I got told that the American public “wouldn’t understand” something. I was flattered when Stronach asked my opinion when it came to The Dawnhounds and confused American copyeditors, on the understanding that I’d already bloodied my nose in the ring.

“I felt like I fought a thousand battles to retain NZ voice,” he told me.

“THE AMERICANS DO NOT NEED TO UNDERSTAND IT; THEY CAN WORK IT OUT VIA CONTEXT CLUES,” I shouted back unhelpfully.

A battle fought hard – and won. The result is ferocious, pacey, bonkers, genre-defying. The worldbuilding is rich and fetid: so much has happened before the book even begins that informs the story, and you’re carried along in the tide – your hand is not held and you are not given ceaseless glossaries (an increasing trick of modern SFF novels which cannot decide if they want to be novels or lore guides). There are pirates! By God, there are pirates.

The Dawnhounds is a salvo for the international SFF market. Americans are getting a taste for Kiwi-inflected science fiction, fantasy and horror. Turns out they can work it out via context clues. That they have just been given a gift in this book is unquestionable. What about us? I see it as chance to kōrero about what our SFF future could look like – and even more importantly, relax into an SFF story that shamelessly absorbs, rather than escapes, New Zealand. There are no halflings here: just cops, salt water, and mycelium.

Read Sascha Stronach’s extraordinary essay about the writing of The Dawnhounds, and the landing of a lucrative three-book deal, here.

'You have to be in tune with the elements and the atua, to the sound of the waves hitting the waka and the direction of the wind on your cheek.'
By Te Kuru o te Marama Dewes
Contributing writer
Aotearoa continues to adapt to a new reality and The Spinoff is right there, sorting fact from fiction to bring you the latest updates and biggest stories. Help us continue this coverage, and so much more, by supporting The Spinoff Members.Madeleine Chapman, EditorJoin Members

You bought loads of books this week. These are the books you bought the most of.
By The Spinoff Review of Books
⚖️