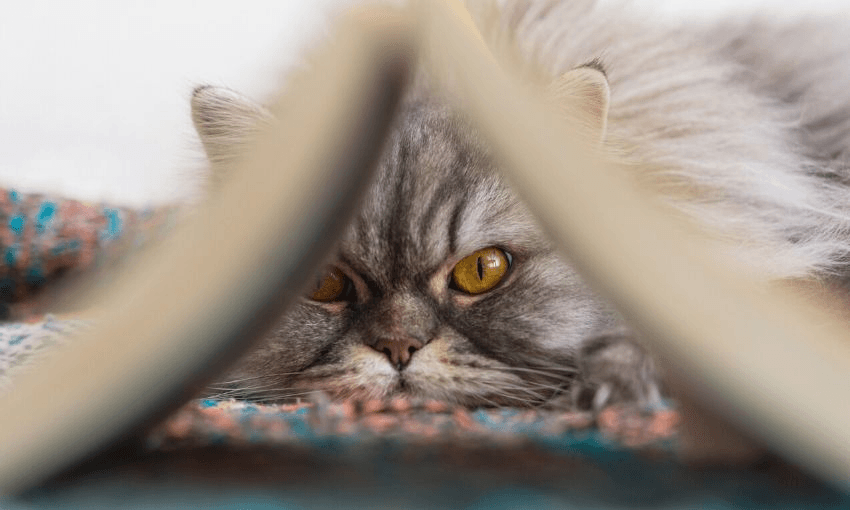 The Getty caption is magnificent: “The cat looks through the book, the day of the Book, the cat and the open book. Home leisure. Self-isolation of the house. It’s good to be home. Home schooling. Furry Scottish cat.” (Photo: Getty Images)

The Unity Books bestseller chart for the week ending May 15

The Getty caption is magnificent: “The cat looks through the book, the day of the Book, the cat and the open book. Home leisure. Self-isolation of the house. It’s good to be home. Home schooling. Furry Scottish cat.” (Photo: Getty Images)

Newly anointed winner of the Jann Medlicott Acorn Prize for Fiction. The judges were unanimous in their decision. They described this debut as a “mere pounamu”, and commented:

“There is violence and sadness and rawness in this book, but buoyant humour too, remarkable insights into the minds of children and young men, incredible forgiveness and a massive suffusion of love… With its uniquely New Zealand voice, its sparing and often beautiful language, the novel patiently weaves the strands of its tale into an emotionally enveloping korowai, or cloak.”

Third in the lionised trilogy about Thomas Cromwell, after Wolf Hall and Bring Up the Bodies. Stand by for a review by Danyl Mclauchlan.

After a long period of gradually flattening the curve, it now appears that we are experiencing a second spike in Rooney sales.

4  Before the Coffee Gets Cold by Toshikazu Kawaguchi (Picador, $20)

Newly anointed winner of the Pulitzer Prize for Fiction (Whitehead also won in 2017 for The Underground Railroad), reviewed here by Aaron Smale.

Winner of the general non-fiction category of the Ockham New Zealand Book Awards; you can read the first section here.

7  Lady in Waiting: My Extraordinary Life in the Shadow of the Crown by Anne Glenconner (Hachette, $35)

“Siberia may be a vast, hostile landscape with a bloody past. But scattered through this expanse are extraordinary pianos… With the breakdown of the Soviet Union in the 1990s, numerous instruments were left to rot when funding ran out… Yet there are also pianos that have managed to withstand the furtive cold forever trying to creep into their strings. Belief in music’s comfort survives in muffled notes from broken hammers, in beautiful harmonies describing unspeakable things that words can’t touch. It survives in the pianos that everyday people have done everything to protect” – the book’s website, which is chocka with sublime images and videos.

Short and smart, with many sentences that make you wince. A finalist for the Jann Medlicott Acorn Prize for Fiction and a very strong contender, we’re sure.

Olive would be the queen of social distancing.

This book is almost exactly the same as the other one just FYI.

“The ease with which ordinary civilians can become perpetrators of or bystanders to barbarity, while others, conversely, manage to hold on to their humanity even in the most desperate circumstances and at enormous personal risk is one of the great and painful questions of civilisation. It is a subject addressed unsparingly by The Cut Out Girl.” – Financial Times

Winner of the 2019 Booker Prize. Evaristo was meant to be in New Zealand about now for the Auckland Writers Festival but obviously that was not a go. Instead, she and many other big names are recording a series of sessions that you can view here. New episodes go up each Sunday – this week features Becky Manawatu.

Scarlett Cayford wrote a cool piece about her Patchett obsession, and about getting her muddled with Anne Tyler.

A novel about an actress’s daughter attempting to discover – and then to tell – the true story of her mother’s life.

OK, so this sounds terrific: “Preoccupied by the apocalyptic horizon of climate change, the dark pulsing terror at the centre of the novel, and by the “feeling of daily life”, Lizzie understands – or at least, enacts – the truth that we inhabit multiple scales of experience at the same time: from the minutiae of school drop-offs and P.T.A. activism to the frictions of our personal relationships all the way to the geological immensity of our (not so slowly) corroding planet.” – the New York Times.