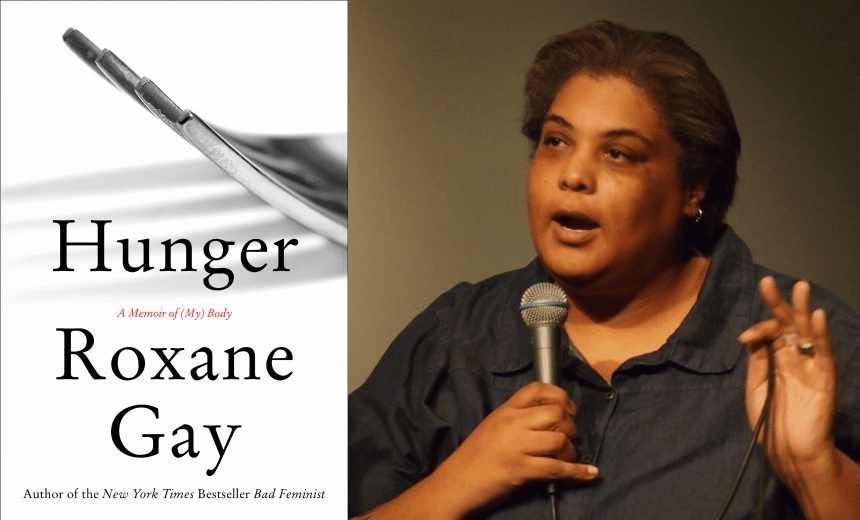 Review: a rare memoir about being fat that doesn’t end in weight loss

Content warning: this article discusses sexual assault and eating disorders, which may be distressing for sufferers and survivors.

When Roxane Gay was 12 years old she rode her bike into the woods with a boy she was dating, and he and his friends took turns raping her. For years she never told anyone. Instead, she ate. She gained weight, enough that her size has Gay considering bariatric surgery in the opening to her new memoir.

Gay’s life has been remarkable: the PhD and the best-selling essay collection, the book of short stories, the novel and the Marvel comics; her elevation to a dominant voice in popular culture and feminist discourse; the book tours and signings; the screenplay in progress. Her memoir shows how much all of that has been overshadowed by the day in the woods and the way that, unable to exact justice from the boys who hurt her, she has meted out a punishment on her own body in the years since.

Hunger: A Memoir of My Body is, frankly, a horrifying book. Gay has written about the rape before, in her essay collection Bad Feminist, and about women who are violently and sexually hurt by men in her fiction. Long-time readers know her work deals with the subject of how women cope, or don’t, with the things that happen to them. The real reason this book is so hard to read concerns the vein Gay cuts deep into for the first time here: the utterly dehumanising experience of being fat, and black, and female, in a society that tells fat people they don’t deserve the most basic of life’s comforts. To eat in public. To sit in chairs. To get the medical treatment they need. To wear nice things, to feel pretty, to have respect.

As Gay chronicles the double takes and the abuse, the indignities at literary events and the way she is sometimes too exhausted by it all to even leave her house, the pain in every word makes you want to grab a blowtorch and go and fuck some stuff up. Professionally, Gay is the epitome of success; she will shortly leave her job as a university professor because she is able to make a living from writing full-time. She makes the New York Times bestseller list, gets rapturous standing ovations at events, and she is denied even the smallest human dignities because of her size.

Watching the reaction of journalists and interviewers to Hunger has been telling: the Australian writer who mused aloud about whether Gay would be able to fit in the office lift (of course she could) and then tried to pass herself off as a fan who’d made a mistake, rather than cruelly ignorant. The journalist who – perhaps reaching for something breathlessly artistic, rather than recognising Gay was an actual person – asked her to “describe your body for me.”

Since Hunger‘s release – a book that details the way a woman used food to protect herself after a brutal gang rape – readers have sent Gay weight loss tips, or contacted her to suggest that being fat is unhealthy. If anyone remained in any doubt about the way we treat or talk to or think about fat people after reading this book, the proof has been in Roxane Gay’s Twitter mentions every day since its release.

Hunger is a difficult book to review dispassionately, and not only because I recently met Gay and liked her. She is a warm, shy, professional person who should be enjoying the experience of being a literary rock star, not worrying about whether the event she’s speaking at got the memo about the chair she needs. Hunger is also a hard book to review dispassionately because the unfairness of Gay’s situation seems almost unbearable: to have experienced an horrific assault; to see no justice for that assault; to take the hurt out on your own body through food; to be publicly judged every day for what your body looks like afterwards. It seems like a two, three, four-fold punishment for an event that was already terrible enough for a lifetime.

The book seems more of a manifesto than a memoir. It has a single, red-raw thesis and readers expecting Gay’s usual non-fiction blend of history and popular culture and current events should settle down instead for a single book-length thread. I hope Gay is given the opportunity to write another memoir, someday; her achievements as a woman, a woman of colour, and a writer deserve further unpacking than they’ve received in her essays to date, and this book skims over them. It’s hard to be critical of that decision when Gay’s story is about the way being fat in our society means all of your other professional and personal achievements are minimised anyway. The weight of a single narrative is a reflection of the way Gay’s body is a single narrative.

She seems barely in a place where the wound has scabbed over enough to talk about it, but that’s her decision. I wondered, in places, whether perhaps she should have waited. But waited for what? We often seem to be uncomfortable with survivor stories that are unresolved, where the teller is not all right. Gay is telling, in real time, a story about not being all right, while it is still unfolding and while those listening to the story are giving feedback, also in real time, about whether she should maybe just eat less and try exercise. It seems a precarious place from which to tell a story, but if she’d waited until we treated rape survivors with compassion, and fat people like people, I suppose she would have been waiting for a long time.

Parts of the book seem a little generalised because they are tentative, as though Gay was willing to put her formidable talent with rhetoric to use, but not to explain to us exactly to how the point she is making applies to her personally. The specific bits are the best. They evoke what’s good about Gay’s writing: the juicy, squelchy feeling of unbridled honesty that her greatest, joyfully unhinged fictional characters espouse. Gay’s admission that she has obsessively researched the life of the old boyfriend responsible for her rape, even ringing his office and breathing down the line. Her fetishising of anorexia and the way she wished her self-harm had gone in that direction instead, so she’d be cared for and her willpower admired. In Gay’s specificity, she tells stories that on face value sound messy and shocking, but upon reflection hold a mirror up to what’s shitty about our society. They skewer our permitted ways of feeling pain, permitted responses to certain crimes.

In the same way that Lena Dunham’s Girls was criticised for not being encapsulating the story of every woman ever (the subject of one of Gay’s earlier essays), fat women’s narratives about themselves that don’t end in weight loss are so rare that this one probably carries an unrealistic burden of expectation. Gay is not saying that people are only fat because of trauma, and she is not rebuffing body positivity, although she struggles to apply it to herself because of the circumstances that led to her weight gain. She is just telling one story, and the places where that story is weirdly, indelibly hers are the strongest. Considering the number of memoirs about people finding themselves through travel we’ve made room for, surely there’s room for more stories about fat people who don’t end up thin, at least to give Gay backup.

In a month where the new Netflix movie To the Bone explores yet another underweight young white woman’s experience of anorexia as a way of processing trauma, Gay’s story is important because she is an outlier. Any woman who has been hurt by a man and has taken it out on her own body will be able to relate to the book, but that is not really, I think, the point. Gay’s experience is unusual, contradictory, messy, unresolved. People – it is clear from the book’s reception – find it harder to feel compassion for her situation than they would if she weighed a hundred kilos less.

We should ask ourselves why that is, why a fragile performance of female victimhood is more agreeable to us than an unruly one. We should try to understand why someone who has experienced what Gay did would want to feel anything other than fragile. She speaks in the book of wanting to be big enough that she is never attacked again but small enough to go unnoticed; the pain of a fat body that is at once completely visible and invisible. Women like me have so many stories about our bodies to see ourselves in. Women like Roxane Gay deserve them too.

Hunger: A Memoir of (My) Body by Roxane Gay (Constable & Robinson, $35) is available at Unity Books.