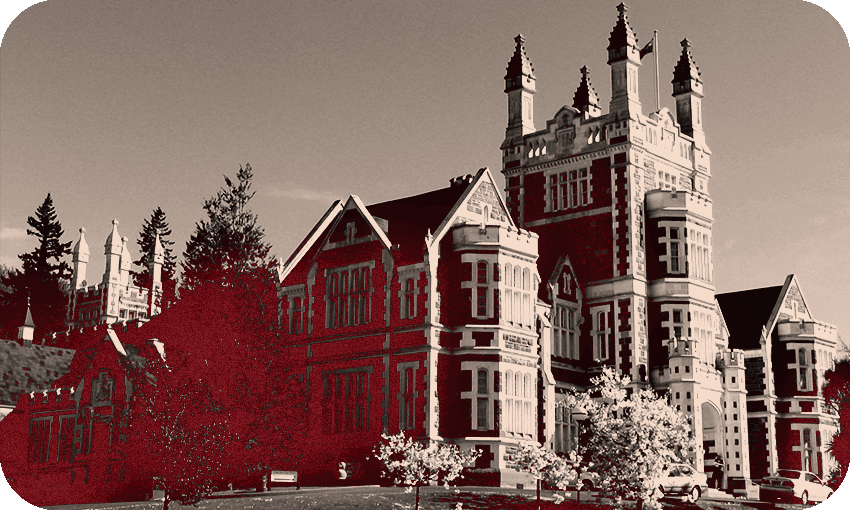 By Breton Dukes
Guest writer
Made possible by

A month ago The Spinoff published an essay by Breton Dukes about his time at Otago Boys’ High School, and how the toxic culture there allowed teacher David Bond to continue abusing multiple boys for years. Dukes, who is writing a book on the topic, asked other old boys to contact him with their stories. Here are three of them.

None of these men were involved with the court case and their stories have not been published before.

Ex-pupil A: “ … and like him going in and fucking showering with the boys in the locker rooms at lunchtimes.”

A: “Ah, yeah, yeah, yeah. Yeah, so guys would go out and play touch or whatever at lunchtime and then go in and take a shower and Bond would be in there as well.”

I met ex-pupil A at a Dunedin café. He’s 40 now, attending OBHS between 1995 and 1999. He’d emailed in response to the article I wrote for The Spinoff, which focused on the culture of OBHS when I was there between 1987 and 1991. Bullying, conformity and Dave Bond, a maths teacher/sports coach who worked at the school from 1980 until 2010 and who, in March this year, pleaded guilty to sexually abusing a number of boys at the school.

A: “The last class I remember with him he pretty much exposed himself to the class – which was absolutely bizarre.”

Me: “What do you mean, he pulled his trousers down? Or?”

A: “He kind of, it’s so hard to, it’s so weird to explain, but it was like he … he was wearing these, like his slacks and shirt and he didn’t have a belt on and the buttons, the buttons on his pants were undone and so like, and I, and he made me sit in the front row with you know a couple of others – “

Me: “This is seventh form?”

A: “Yep. So we were old enough to kick his arse at this time anyway. And he would stand quite close to the desk and then just let his pants drop and then kind of pull them back up. And then like, I remember his pubes, like, right there.”

I talked to ex-pupil B on the phone. He lives in Timaru. He was at Otago Boys from 1985. Early in our phone conversation he told me about how Bond would take certain boys away for weekend ski trips to Wānaka, where they would stay with Bond at Bond’s parents’ Hāwea crib. Pre-ski weekend the boys would go to Bond’s house to wax their skis. Both times the boy went to Bond’s house, Bond turned on a video.

B: “ … he would obviously find some sort of common ground and in this instance it was the skiing and it was like, ‘Oh, I’ve got this video,’ and I, and I remember watching it, so I’m only, I’m only 14 at the time and there were sex scenes and there was stuff like that…”

Ex-pupil B then told me about the weekends away. After school on the Friday, they drove to Hāwea in Bond’s 4WD Subaru station wagon. Saturday they skied Treble Cone.

B: “Saturday night he would take us to the fucking pub.”

B: “Yep, yep, the Hāwea pub and we’d get flagons of piss and he would ply us with alcohol … we’d have these beers and then he, he would start wrestling. He would want to be wrestling with the boys and and he would want to be wrestling with me. And, and I remember, I remember it quite vividly, like, nah, I can, I can honestly put my hand on my heart and I’ve spoken to people about this before but, nothing ever, he never ah, fondled me, he never did any of that stuff to me and, and, and my wife’s like, ‘Oh you sure he didn’t do something? And you’ve just repressed it or you’ve just – I’m like no, because he’s obviously got to the point with me where he knew that I was wise to what he was up to.”

B: “And um, but it was still, in reflection, it was like oh really, we’re 14-year-old boys and we’re going away with a teacher and um, he’s taken us to the pub and we’re getting flagons of beer and we’re going back to his, his crib and drinking the beers – “

Me: “And then wrestling.”

Ex-pupil C was at OBHS in the early 1980s. He was in Indonesia when I called him.

C: “I mean the teachers used to joke about it. I heard the teachers joking about it myself. They knew what he was.”

C: “That’s right mate. And they knew the whole time.”

Me: “So did you ever see a teacher try and stop him or say anything?”

C: “Him and [another teacher]. They were both sitting – I used to have to sit by the teacher’s desk, yeah? I was pretty naughty, you know – “

C: “So you know and they used to joke about him and he came in one day and they were joking about him, and I remember this, when he went out, they were like, oh, you know?”

Ex-pupil C was in Bond’s rugby team in fourth form. Prior to the above conversation he told me that during practices Bond had grabbed his genitals when Bond was coaching correct tackling technique. I asked about the impact this had on him.

I have heard not only from old boys of OBHS, but also other single sex boys’ schools around New Zealand. About abuse, yes, but mostly about the poisonous “winner vs loser” culture of these schools and the negative impact of this. I have also heard a lot about good teachers at OBHS and how different students gained a lot from attending the school. I am interested in these stories, just as I remain interested in stories about Bond and bullying and the impact these forces had on boys as they became men.

Please contact me on bretondukes@outlook.com if you are an old boy of OBHS and have anything to share.