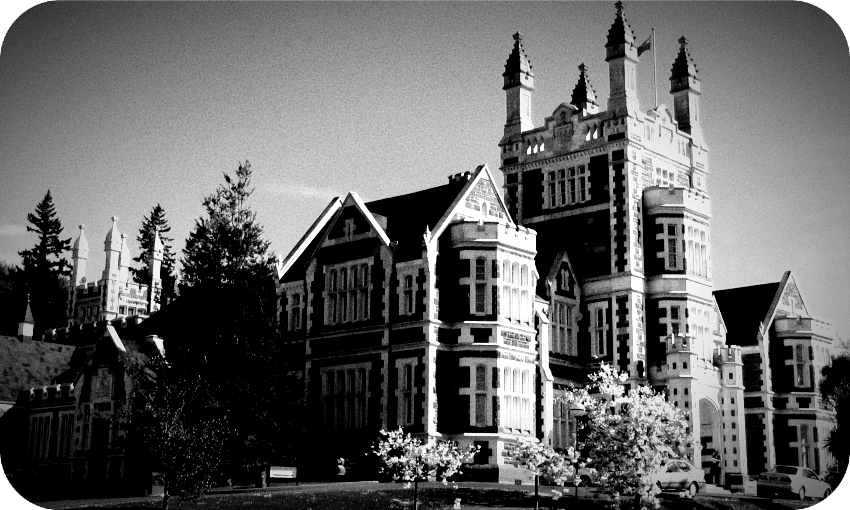 To be a man: a message to old boys of Otago Boys’ High School

Dunedin writer Breton Dukes was at Otago Boys’ between 1987 and 1991. Here, he writes of his time at the school, and of David Bond, a former teacher recently convicted for multiple sex attacks on boys.

The shoe choice at Otago Boys’ High School was between Nomads or these other sharper-toed types. If you wore another brand you were a fag. If you didn’t have short back and sides with a long fringe you were a fag. With your school bag, if you wore both straps over your shoulders, you were a fag.

I am 48 and work part time as a cook in Dunedin. The rest of the time – my wife is a psychiatric registrar – I look after our three young children. We live in Māori Hill – pretty close to OBHS. Sometimes, around town, I see teachers from my school days. There, entering the TAB, is the teacher nicknamed for the shape of his ears. There, walking the town belt and no longer with the walrus-style moustache, is the giant who used to coach the first XV. And there’s David Russell Bond. Not in the flesh, but in the ODT, on the internet.

Otago Boys’ back then – 1987-1991 – was maths, science, cricket and rugby. Other stuff like English, drama, debating, music came into it, but to really soar from the stone-grey turrets you had to excel in those subjects. Manual consisted of one term each of metalwork, woodwork and art. Creativity wasn’t a thing at the school. Like bullying, sexuality and emotion, it was taboo. So art consisted of drawing a sphere, then making a shadow come off that sphere. We did self-portraits. I had braces, zits and big ears. I was skinny with an oversized head. But I wore the correct shoes and I played sport and when we got to wear trousers in fifth form Mum tapered them enough to avoid me standing out.

My three books all feature exaggerated Kiwi characters set in neutral towns and cities in Aotearoa. But with the world shifting so much these last few years I can’t keep my characters in place. Trump, Covid, Ukraine, the riots in Wellington. The world I knew growing up, the world I understood and could set my characters in, no longer exists. It’s reality that is now exaggerated and my characters keep sliding off that first paragraph.

David Bond was a smiley, springy type. He had a neat head of short dark hair that looked like it wanted to curl. Tanned from the Wānaka ski fields, his features were pleasant enough, tightly packed against the dark skin, like someone had drawn them neatly onto a raisin. He drove a Pajero and taught maths and coached cricket and rugby. Recently he pleaded guilty to a slew of historic sexual abuse crimes against different boys at the school.

I wasn’t abused, but I could have been. It was a lottery. If I’d been into cricket, if I was in the wrong place at the wrong time…

A friend told me of a time he got ejected from class and was waiting in the corridor when Bond materialised, got close, and fondled his ear.

“Had your ear pierced have you J?”

Luckily the teacher who had kicked him out of class appeared and said “That will be all Mr Bond.”

Bond departed; my friend felt weird. Weird enough to remember it after 30-odd years. But what counts is how the other teacher shooed Bond off. He knew Bond. Or suspected.

When Bond pleaded guilty to the recent charges the ODT got in touch with a previous rector who in response to Bond’s guilty plea said: “I was aware of his reputation but I can quite freely say, if there were students who had complaints, they didn’t come to me.”

The B-side of the OBHS curriculum was binge-drinking, misogyny and homophobia. An openly gay pupil or teacher – there weren’t any in the four years I was there – would have been minced meat, because violence was also part of the curriculum. Bullying, the celebration of the battlefield aspect of rugby, fist fights, the glorification of the world wars.

The culture of the school taught me to be closed. To be stoic. To hold fear down. To be a man. It taught me to suspect those who were different. It taught against emotions and the language of emotion. It was loud. It was physical. It was the whole school out on Littlebourne doing a haka to inspire the first XV who at lunchtime or after school were some of the same fuckers bullying those who were different, who were weak, who stood apart from the herd.

Who was going to complain in that environment? And in what words, what language, would that complaint be made? And who did you go to? Someone at the school? Someone of the place that had created the atmosphere that had allowed what had happened to happen? Or, your parents? And then what? Your mum’s storming up to the rector’s office –

Bond put his hands down your pants to check if you were wearing a box. Bond jiggled up against you in the computer room.

If something happened to you and you went to someone in authority, if you shone that particular light on yourself, then you were a fag.

It’s on the school. They, those in charge, as well as knowing about the Bond rumours, knew how we, the boys, communicated, they understood our language and how we lived that language, and never once, during my time, was “fag” addressed, nor was there any effective intervention regarding all the bullying, nor was it pointed out that being good at tiddling a rugby ball up and down Littlebourne didn’t make you anything except good at tiddling a ball up and down Littlebourne.

So, since I can’t seem to to write about the modern world, I am setting my next project in that ocean of young, decent, smart, and terrified young boys that Bond sharked about in. Fiction or non-fiction, I don’t know yet. But if you went to OBHS between 1987 and 2000 or if you taught there and you have stories to share, good or bad, I am keen to listen – BretonDukes@outlook.com