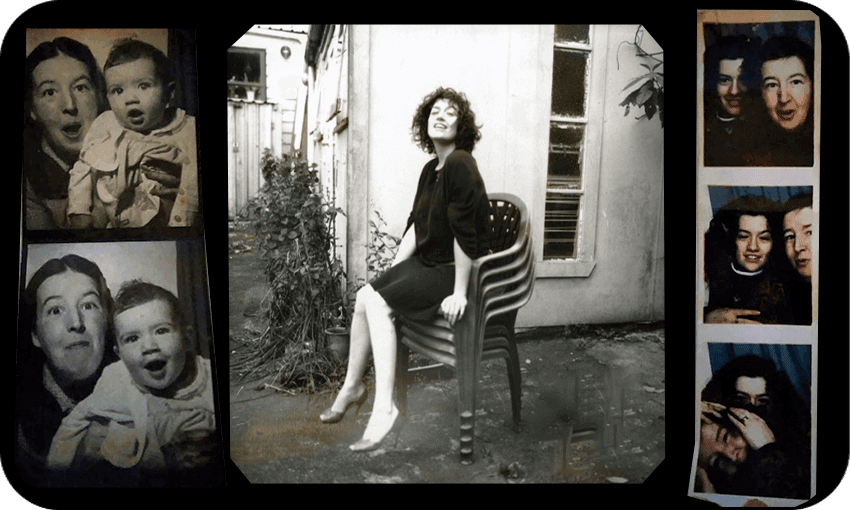 ‘Take another one’: Noelle McCarthy on the photos behind her new memoir, Grand

By Noelle McCarthy
Guest writer
Made possible by

Long lost family photographs unearthed while writing her first book made Noelle McCarthy realise the past isn’t always as black and white as we remember it.

The last time I saw my mother, I sat alongside her on a narrow hospital cot, stretched my arm out and took several photos. Timestamped a few weeks before Covid locked the world down, they show us with our heads close together, filling the frame, hers tiny, mine bigger. Death has already started to creep into her face, but there she is – alert, narrow-eyed, game still, even with the sunken cheeks and balding temples. I look like a grieving bullfrog, eyes red and bulgy.

I don’t know why I took them, the weight of the moment barely covered by a selfie. Or rather, of course I do – photos were our thing, hers more than mine. In good health, she was a demon for them, taking any excuse for a self-directed shoot: a mad hat, a vintage car, the pumpkin suit she bought in a job lot of dress-ups for 10 euros (the convict costume came with a free ball and chain). She was a ruthless editor, instantly dismissing badly composed shots, ones that didn’t capture the spirit of the thing.  “Take another one, a good one now,” she’d say. “Do it again, come on Noelle, do it properly, stop making a fool of me.”

My mother Caroline, with her dahlia in the kitchen at home in Cork, August 2020. It was a spur of the moment thing, I noticed the flower matched her hair. She was game enough to pose, even though she thought she looked terrible. She had lung cancer, she was starting to feel sick by then.

I wrote Grand at a desk lined with photos of my mother: as a young girl on holiday in Kerry, in a pub lounge in Cork sometime in the 80s with rouged cheeks and her best friend next to her, as a grandmother with a giant pink dahlia, me getting married and her standing next to me. Those photos froze her in single moments, trapped under glass like a butterfly. They kept me honest, or as close to honest as I could get, a reminder that she was always more than what I saw of her. More than just my mother; a young woman in a bar with frosted lipstick and every anticipation of a good night in front of her, a teenager with long hair and long legs and an arm full of irises posing self-consciously. A complicated woman, a daughter, a friend, a wife, a personality of some force and depth and mystery. I looked at the photos and tried to get as much of her as I could into our story.

My mother found this photo out of the blue one year. She’s in Kerry here, in a village called Glenbeigh, in 1970 so she was 16. She had two copies made and sent them to me and my sister Sarah. My copy arrived a few weeks after I had my daughter Eve.

As I was finishing the manuscript, my sister was sorting through our mother’s things at home in Ireland. She found a couple of strips of passport photos – one in black and white, one in colour. It’s very early in the morning in New Zealand when she sends them through to me. I’m a teenager in the colour strip, with long dark curly hair like my mother. Hers is a perm from the place at the bottom of Shandon Street, where you could smoke while the hairdresser did you. At first I can’t place it, and then I remember. A white booth, in the corner, next to a Coke machine, beside the platform where the train leaves for Cork. Pigeons roosting in the open air above it. A grey curtain with neat knife-pleats hanging chest-high across the opening. A grey plastic stool in front of the camera. “Come on, for the laugh,” one of us would have said.

We were up for a public speaking competition. I’d have been feeling indulgent towards her, for behaving herself all day, drinking the too-strong tea and eating sandwiches like the other parents, not trying to slip away to some place along the Quays for two pints of Carling before the train. “Come on!” And we’d have found the surprisingly large number of pound coins required. Inside, two of us on the tiny stool, me braced against the cold white wall, avoiding her bony elbows. The familiar smell of her: cigarettes, Silvermints, and Estee Lauder White Linen, or Alliage. “Come on Noelle, stop messing!” Her mouth’s in a humorous twist in the first photo, not smiling yet, but not far off. By the second shot, I’m pulling her head down, onto my lap. I thought that it was my hand on the side of her head, when my sister sent the photos. But it’s her hands, her ring, our hands have always been identical. She’s laughing, hand on her head, being as silly as I am.

My mother and me, in a Dublin train station in 1994. The scarf is from my school uniform, I’d been at a public speaking competition. I’m about 14 years old here.

Back in New Zealand, in the early morning, I am confused when I see these photos. I do not remember us being happy during this year of my life. I remember fighting, and screaming, notes left on congealing dinners outside my bedroom door. I do not remember talking to her much at all. But here it is written down in my swirly teenage writing on the back of the photo: in March 1993 we were together in a train station in Dublin, happy, laughing, clowning around. Am I wrong about everything, I wonder, when I see this photograph? What does it say about my unreliability as a narrator that I have no memory of bits like this, bits that were fun? The photos are evidence that things aren’t always as I remember. I tell my sister, “It’s lucky you sent this.”

The other strip is black and white. It’s been about 30 years since I last saw it. I’m a baby – somewhere between six months and a year old – with a cap of dark hair, and big dark eyes. My mother’s eyes are hazel, but in the black and white photos they look as dark as mine. She’s holding me up and out towards the camera. In the second shot, the flash must have gone off, I’m starting to smile. She’s young – 24 when I was born, but she looks even younger. Her hair’s in a funny style, parted in the middle, caught up at the temples on each side. It makes her look innocent and slightly frumpy – a young mother and housewife at the end of the 1970s. She’d given up nursing by then, and was adjusting to her new role in life.

These were taken probably some time in the middle of 1979. They came in the same package as the train station one. “They were folded up in a little tin in your old bedroom” my sister wrote.

Under the duvet on a New Zealand morning, I stare back into time, tears mixing with the sleep in my eyes. After months spent thinking about how much my mother lost, it’s a bittersweet feeling, seeing her so young and so happy, here in her 70s version of a selfie, holding the first baby she could keep up to the light.

This photo was a total surprise to me. It’s an outtake from a magazine shoot I did with Stephen Langdon in Auckland sometime in 2005.  My sister found in a pile of my mother’s stuff after she died… I must have sent it to her. I used to send her things, cards, silly presents, photographs and stuff. Lots of people have said “is that your mum” on the cover? Sometimes I say yes.

Grand: Becoming My Mother’s Daughter (Penguin, $35) is is available from Unity Books Auckland and Wellington.

You bought loads of books this week. These are the books you bought the most of.
By The Spinoff Review of Books
⚖️