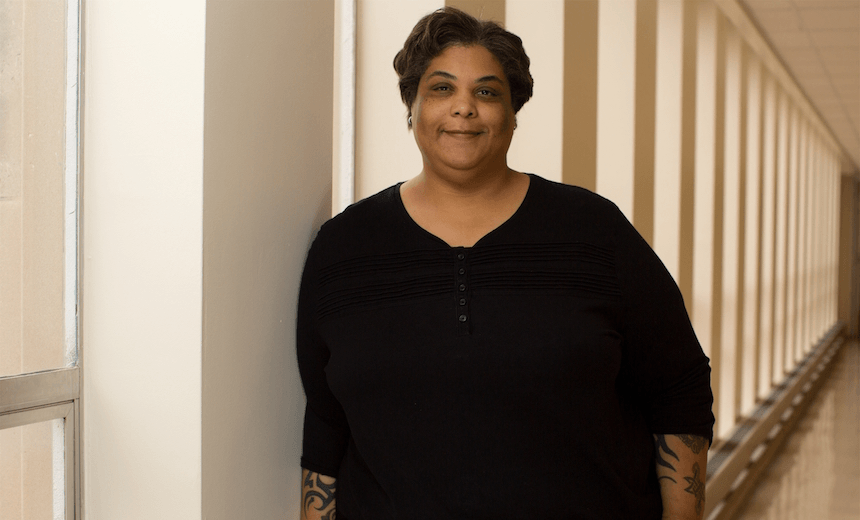 Feminist writer Roxane Gay explores the female condition in her new collection of short stories. Some critics have loathed the depiction of women characters who welcome violence; reviewer Holly Walker takes another approach.

Roxane Gay is good at opening sentences. Examples from her first short story collection, Difficult Women: “The stone thrower lives in a glass house with his glass family.” “When I was a young girl, my husband’s father flew an air machine into the sun.” And my favourite: “We are having a heated debate about whether or not yogurt can expire when my husband suggests we stay together but see other people.”

Striking imagery, and at the heart of each image, a difficult woman. A glass woman, whose husband can’t handle her fragility and seeks comfort in the arms of flesh and blood mistresses. A loyal woman, who refuses to sacrifice her family to bring back the sun. A wry woman, who calls her husband’s bluff: “I vocalise my appreciation for the expired yogurt and do a lot of elaborate spoon licking. I hold my husband’s gaze the entire time. He was a virgin when we married. He looks away first.”

Gay is best known for her 2014 essay collection Bad Feminist. In it, she explored how inhospitable the feminist movement can be to some women, the contradictions of enjoying popular culture that shamefully objectifies women, and how to build an inclusive and intersectional feminist movement with room for everyone. Those debates haven’t gone away, but at least thanks to Gay, they are now a bit easier to navigate. Working across genres, but always exploring the same themes, she has also written one novel, An Untamed State, and a memoir about weight and body image, Hunger, that will come out later this year.

In this, her first collection of short stories, she explores familiar themes of feminism and the female condition. In fiction, Gay can enjoy a freedom to come at these themes obliquely, without having to profess an opinion or offer a resolution, which makes them all the more powerful. Across the 21 stories, her preoccupations are clear: sex, violence, sexual violence, race, racially-motivated sexual violence, sisterhood, female friendship, and, oh, sexual violence.

Ironically, other reviewers have criticised Gay for depicting female victims with complex responses to this violence, including actively seeking it out for sexual or psychological catharsis, like the mother who looks for a man who will beat her to absolve her guilt over the death of her toddler son, or the woman who tries to provoke her loving partner into hurting her in response to historical sexual trauma.

I don’t buy this criticism. Telling it like it is does not equate to approval. Gay can hate violence against women while at the same time recognising that women’s responses to it are complicated, and usually rooted in past trauma. Gay has also been criticised for not fleshing out the male characters enough, to which I say: it is not called Difficult Men.

While the themes and preoccupations may vary little across the collection, everything else does: genre, setting, narrative voice, length. Several read like fables or dark fairytales – shades of Angela Carter and Margaret Atwood – while others are short, just one or two pages, quickly working an idea or stereotype through to its logical conclusion. There is even a list: the title story presents for the reader the different categories of “difficult woman,” and why they the way they are, ending with “Dead Girls: Death makes them more interesting. Death makes them more beautiful.”

Gay is certainly not afraid to play around with genres. She presents possible futures, like an America where the South has seceded in a second civil war, and impossible presents, like a woman who is followed around by a raincloud, leaving black mould on every ceiling (perhaps not too far from reality for some living in substandard housing), or the glass woman who lives with a stonecutter. While I applaud the ambition of these, it’s the straightforward narratives that present the complex interior lives of regular women – poor white women, black woman academics, mothers, sisters and friends – that are more interesting and work better.

The two most effecting stories are the opener, “I Will Follow You”, in which twin sisters navigate the aftermath of childhood sexual assault and the ways in which they must take care of each other as adults, and the closer “Strange Gods” in which a young woman struggles to believe she deserves to be loved due to the fact that she was raped by her boyfriend and his five friends as a teenager. I was powerfully reminded of New Zealand writer Tracey Slaughter’s devastating story “Consent”. Later, I read that Gay herself was the victim of a similar assault at age 12.

Not everything works in this collection. Gay is prone to overuse of cliché, over reliance on allegory, and over-ambitious world creation that doesn’t quite come off. But always the emotional and interior lives of her difficult women are authentic and affecting. As her dedication reads, these difficult women should be celebrated for their very nature. So should she.