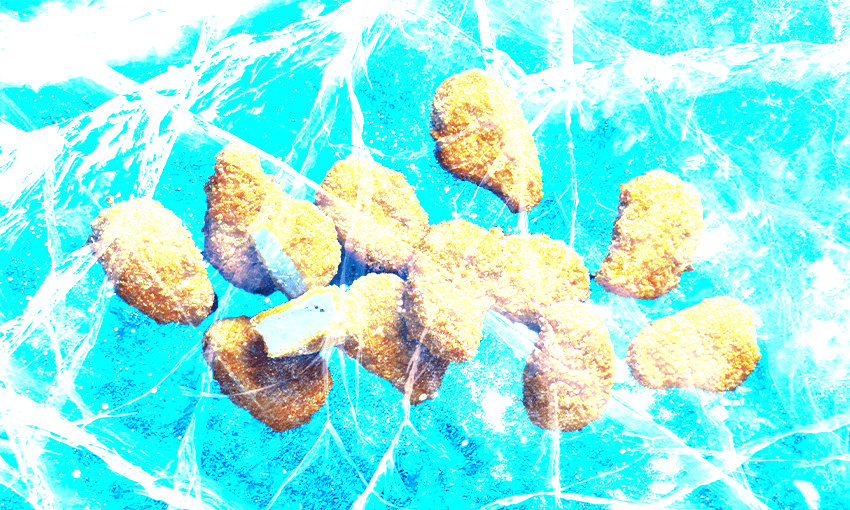 A chicken nugget shortage could get worse before it gets better. (Image: Getty / Treatment: Archi Banal)

A chicken nugget shortage could get worse before it gets better. (Image: Getty / Treatment: Archi Banal)

Covid and staffing shortages are playing their part. But there’s another strange reason for the nationwide nugget shortage.

Everyone wants nuggets. Everyone needs nuggets. “It’s the nuggets or the tenders,” says Matthew Easton about the biggest-selling products in Waitoa’s range of frozen goods, usually found in the chilled section of your local supermarket. “I see photos of people stockpiling them in their freezers.”

But everyone can’t have nuggets. Over the past two years of Covid-inspired stay-at-home orders, demand for Waitoa’s frozen chicken products has kept going up. Now that lockdowns are over, it hasn’t subsided. With labour shortages, staff catching Covid and up to 100 company vacancies to fill, Easton, the general manager of sales and marketing, says Waitoa’s been playing catch-up.

People will take whatever they can give them, and whatever’s there quickly sells out. That’s true of the nuggets, the tenders and the chicken burger patties, as well as plant-based nuggets made under the Let’s Eat brand. “We make it, then straight away it goes and it sells out again.”

But it’s nuggets that people want the most. Easton is constantly asked when they’ll be back in stock. My own kids are begging me for them, but at my local Countdown, there’s always a big gap in the chiller where they used to be. “Your kids are onto something,” Easton admits.

It’s partly why I’ve called Easton, to relay their complaints and find out when I might be able to cook them for dinner again. He’s a salesman, sees those empty supermarket chilled goods sections all the time, and admits it’s hard to see demand building and not make the most of it. “We want a full freezer so everyone can enjoy nuggets whenever they want them — and we’re working towards that,” he says.

I expected Easton to relay the same concerns every Aotearoa business has — supply chain issues, staffing shortages, Covid illnesses. Michael Brooks, the executive director of Poultry NZ, says he’s seen chicken factories with up to 50% of staff away. “The processing side of the industry is suffering,” says Brooks. “Some of the products, like chicken skewers, they’re the ones that the companies are looking at and saying, ‘We don’t have the labour resources to do this.'”

But there’s a third issue at play, one that’s come out of nowhere. “There’s currently a shortage of CO2 in New Zealand,” says Easton. Carbon dioxide? Isn’t that exactly the thing the planet is absolutely not short of, the one blamed for causing global warming, epic forest fires, major storms and flood events?

Easton laughs when I say this. He’s not talking about global emissions. He means the cold stuff — liquid, food-grade CO2. It turns out the chilly gas isn’t just useful for taking out a Terminator, but can also be used as a preservative, and to keep chicken nuggets in their nuggety shape. “We need to keep it nice and cold so it keeps that shape of the nugget,” he says.

It’s true — there really is a shortage of CO2. Just when you thought things couldn’t be worse at your local supermarket, supplies of craft beers, cheese, preserved meats, carbonated drinks and sparkling wine are suddenly under threat. It’s all related to the closure of the Marsden Point refinery, where CO2 normally comes from. The only other place to get it is at a production plant in Taranaki.

A Food and Grocery Council spokesman recently told Stuff this means food price rises — over and above the rising cost of groceries — could be on their way. “If this situation isn’t resolved, before long there could be a shortage of those products on supermarket shelves and prices could even rise as a result,” he says. “Manufacturers will have stocks of CO2 and product on hand but they won’t last indefinitely.”

What does this mean for nuggets? It’s not just Waitoa that’s worried — even McNuggets are at risk. While there’s no immediate threat, a McDonald’s spokesperson says: “Like anyone who sources product that requires CO2 in its production, we’re working with our suppliers on planning and contingencies depending on different scenarios.”

Easton says they’re doing the same at Waitoa. “We are still making [them] but because demand’s increased, once you get behind it’s hard to keep up.” When I ask him to forecast exactly when his nuggets will be permanently back in stock, he stalls. “We’re working on reducing our CO2 usage, and once availability improves our team will be working hard to increase production to meet demand.”

But he does have one piece of good news. A new chicken factory processing line is being created, which will allow Waitoa to begin reversing the great chicken nugget shortage of 2022. “It’s great timing,” he says. “We’ll be able to ramp up production to build the stock level up in our customer’s freezers.” The kicker? It can’t be done until “we have the CO2”.