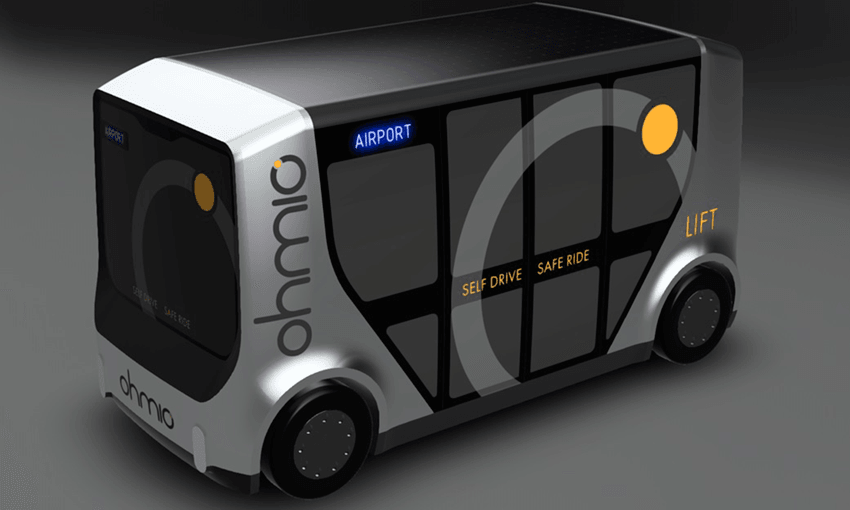 Driverless cars are all the rage right now, but you don’t have to be a Google or Tesla to have your head in the game. Jihee Junn talks to Auckland-based company HMI Technologies about Ohmio, its self-driving subsidiary set to deploy its first shuttles at Christchurch Airport later this year.

On most days along the Las Vegas Strip, the luxury resorts and high-flying casinos are more than enough to pull in a crowd. But the city’s brightly lit boulevard got a little bit brighter last month when Mercedes Benz tested out its fully autonomous, electrically-powered minicar for the 2018 Consumer Electronics Show. The sleek little four-wheel concept is a reverie of futuristic design. And, according to Mercedes, we’ll all be driven around by one of these bad boys no later than the year 2030.

Mercedes, however, wasn’t the only car company jostling for media attention at CES this year, with the likes of Toyota, Fisker, Kia and Byton all joining in on the big hustle. In fact, more and more big car names have been channelling their energies towards impressing the CES crowd over the past few years — a sign that these companies are increasingly pivoting towards things like artificial intelligence and smart design, and away from the gas-guzzling engines signifying the cars of yesteryear.

While New Zealand might seem about as remote as you can get from the forefront of automotive technology (especially considering we haven’t really had a car making industry here since the 1980s), recent developments by companies like HMI Technologies would suggest otherwise.

Better known as the business behind all those electronic signs on our buildings and motorways (the Auckland-based group has approximately 70% market share of digital road signs), HMI Technologies began moving into self-driving vehicles in late 2016 when its chairman and co-founder, Mohammed Hikmet, realised autonomous vehicles (AVs) were the way to go. By January 2017, New Zealand’s first fully driverless vehicle trial was underway at Christchurch Airport after HMI had purchased three Navya Arma shuttles from a French manufacturer to test on the venue’s private roads,

“The point of the trial was to look at the technology and see how reliable and safe it was,” explains HMI chief executive Stephen Matthews. “The next level was to look at the regulatory framework. What would be required to put these vehicles on the road? What would regulators like NZTA and the Ministry of Transport need to consider about these vehicles going on the road? The third point was to consider what the public thought and what their user acceptance of this technology was.”

Following the company’s successful first trial of an existing self-driving shuttle, HMI was prompted to have a crack at making one its own. Which it did, and pretty successfully too, because approximately 9 months later it debuted its AV subsidiary Ohmio to the world by launching a fleet of driverless shuttles near Christchurch Art Gallery.

Electrically powered and at level 4 autonomy, the shuttles operate using self-mapping artificial intelligence. This means that once you drive the shuttle on a specific route, the system will record the coordinates and speed and embed that into the control of the device. The shuttle can then replicate that journey as many times as you want with as many different routes loaded on as you want. They can also be programmed to operate as a connected convoy, meaning multiple vehicles can be linked up to travel as a collective unit.

While you won’t be seeing any of these driverless shuttles on public roads anytime soon, their use in more controlled environments is already revving up for wider commercial use as Ohmio prepares to make its first deployment into Christchurch Airport later this year.

Unlike the brightly coloured shuttles used to initially demonstrate Ohmio’s technology, the vehicles slated for Christchurch Airport are stylish, sleek and monochromatic — aesthetically similar to Toyota’s most recent concept for a self-driving vehicle. But unlike the e-Palette which is aiming to make things like retail and hospitality into a more mobile experience (think that Black Mirror episode where the guy gets hit by an autonomous pizza delivery van), Ohmio’s aim is simply to move people from point A to point B in a safer, more efficient way. And in the context of Christchurch Airport which covers a lot of flat ground, the shuttles can be used to ferry travellers and their luggage from one end of the airport to another, either by passengers hopping on a shuttle travelling on a schedule and route, or hailing one to a specific location via an app on your phone.

“Maybe in the morning when it’s peak time, it goes on a dedicated route, and maybe for the rest of the day it goes on a different route, or it goes where the demand is. I think it’ll be driven off people’s apps on their phones,” says Matthews.

Beyond their use in airports, Matthews says the shuttles — which currently include four different models of varying shapes and sizes — also have the potential to be used in other controlled environments, such as university campuses, retirement villages, recreational areas and tourist locations. Eventually, he hopes they can be used on New Zealand’s public roads alongside regular vehicles where the shuttles can be used as a last mile solution.

“We’re also looking to license the technology, so the applications for the tech could be wider than just passenger vehicles. It could potentially be used in agriculture or logistics,” he says.

One potential use Matthews expands on is the possibility of AVs replacing more commonly used public transport solutions such as light rail. In cities like Auckland where traffic congestion is a major problem, light rail has become a key part of the government’s efforts to make Auckland a more liveable and accessible city. But according to Matthews, AVs are “a 21st-century solution” while light rail is “a 19th-century solution that’s been widely accepted but is very costly”.

“The potential is these vehicles can convoy and move lots of people without all the infrastructure like a railway system,” he says. “Because of their low-cost deployment and their capabilities, they’ve got the possibility of giving transport flexibility where you don’t have to go on dedicated routes like light rail would.”

While AV use certainly makes sense from an efficiency point of view, mainstream adoption remains an elusive goal as uncertainty continues to dominate the wider public’s thinking. It also doesn’t help that stories on AV innovation in the media are peppered with the occasional accident or collision which serve to chip away at attempts to build understanding and trust, even if — such as in the case of a Navya shuttle in Las Vegas last year — it was the human at fault, not the driverless vehicle.

“These are disruptive ideas that are going to shape and change the landscape, just like the arrival of the motor car or telephone over a hundred years ago,” says Matthews. “There are already machines out there doing stuff for us [autonomously]. It’ll be 30 years [since] aeroplanes have had an automatic pilot and land autonomously, so to a degree, we’re already familiar with it. But we still like to have a pilot up front. So it will take some time for us to accept that machines are more reliable than humans. More than 90% of road accidents are caused by human error. So if we can eliminate that, we’re going to save much of the cost.”