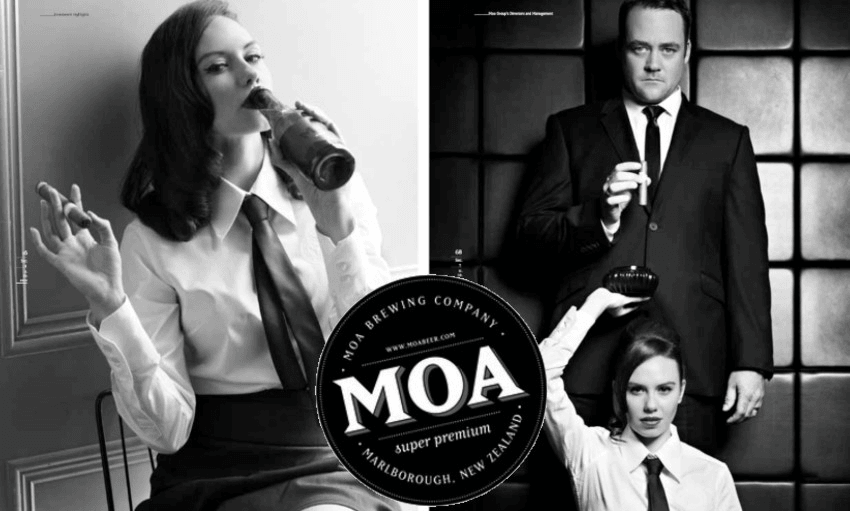 The old marketing ‘made me sick’, says Moa’s new owner

Moa brewery sold in February for $1.9m, leaving behind an unsavoury legacy. Michael Andrew speaks to the new owner about how the brewery plans to move forward, while at the same time returning to its Marlborough roots.

Moa Brewing Company’s new owner Stephen Smith has criticised the company’s old marketing strategy, saying it does not reflect the values of the brewery today.

In response to a Spinoff story discussing the negative reputation of Moa beer, Smith, who has also been Moa’s managing director for the past three years, says the business is once again family-owned with a new vision and model, and is a world apart from the publicly listed company that was labelled misogynistic more than once over the past decade.

“It hasn’t been that way for many years,” he says. “When the story broke, it was on the day me and my family had just settled and bought the business. Our hearts sank, to be honest.”

“It’s really important that people know that it’s not how this business operates, and it hasn’t been done for a very long time. For us, family is important, and having family values in our business is really critical.”

A loss-making company for much of its publicly listed life, Moa’s reputation first began to sour in 2012, when it released its infamous IPO investment prospectus. The document featured a dubious “Mad Men” theme, with photos of company directors dressed in suits, smoking cigars and drinking beer alongside models in white blouses and short skirts.

It included tips on achieving “moments of modern manhood” and on other pages displayed ads for high-end companies: Beretta rifles, Aston Martins and a naked woman on a white horse peddling candles by Ecoya, a company also run by then Moa CEO Geoff Ross.

At the time, Ross defended the prospectus, saying it was supposed to be cutting-edge and sexy in order to appeal to the brand’s target base of “aspiring affluent men”.

While Smith was not with the company back then, and only heard about the prospectus years later, he says it was a poor strategy.

“What they were thinking back then, only they can comment on. I think it was a pretty lazy way to attempt to disrupt and build the brand, personally.”

Smith, who spent 18 years working at Lion Breweries, says he’s familiar with male-focused marketing strategies but Moa’s prospectus and subsequent blunders were examples of how the company “lost its way” after becoming listed.

“It was such a bad decision. I know they were trying to be disruptive, but clearly, it doesn’t get you anywhere by having crude and inappropriate headlines. And to me, it lacked a huge amount of intelligence at the time.

“I’ve got a daughter and I’m happily married. It just made me sick, to be perfectly honest, that anyone thought that was appropriate. It doesn’t matter what decade or what era, it was just poor form.”

While the brewery’s former owner, Moa Group, will be continuing as a publicly listed entity under the rebranded name Savor, Smith says he will continue bringing Moa back to be a community-focused brand, with a strong focus on inclusivity and making quality beer.

“We create good beers and we’ve won a huge amount of awards. I mean, we won New Zealand’s best beer a few years ago with Southern Alps White IPA. People forget all that stuff because they get caught up in this horrific start that it had. It’s just sad that we have this history that’s come back and reminding us how bad we started.”

On beer ranking app Untapped, Moa is rated a 3.56 – just below Sawmill (3.58) and well above Monteith’s, Mac’s and Boundary Road Breweries. Its most popular beer on the app is its Imperial Stout, which rates higher than many Garage Project beers.

However, Smith says the main point of difference is Moa’s origins in Blenheim, Marlborough, where it was started in 2003 by Josh Scott, the son of renowned Marlborough winemaker Allan Scott. The company still operates its brewery and tap room there, which Smith says hosts a regular base of loyal drinkers.

“What we’ve tried to do as a business is really understand what makes us different and special. And it really harks back down to our authentic roots from Marlborough. That’s what we’ve been trying to push. And the fact that we’re 100% New Zealand owned.”

“You only have to go to our tap room on a Sunday when it’s full and realise that people absolutely love what we’re doing. It’s just mind boggling how stunningly beautiful that place [Marlborough] is.”

Smith says he knows from social media metrics that 40% of Moa’s customers are women. While beer industry marketing is often dictated by demographics, he says he’s more interested in creating a product that appeals to everyone, rather than tailoring the branding to a particular gender. There needs to be more substance and authenticity to a brand than a couple of crude headlines, he says.

“We’re focused on the beer, why we think it’s interesting, and we’re trying to be as inclusive as we possibly can be.”

Kathleen Kuehn, a media studies lecturer and beer market researcher at Victoria University, says many brands promise to be more inclusive, but it takes considerable effort for a company to balance the scales to ensure that women are fairly represented, especially in the male-dominated beer industry.

“For me, inclusivity is not just about not being sexist or misogynistic. There are strategic and intentional decisions you can make around hiring and culture. How many women are employed in the tap room? Are there any women brewers there?”

While she says that much of the beer industry still needs to do more to open up to women, Moa’s strategy to focus more on its New Zealand-owned status and Marlborough routes could very well be successful.

“Craft beer brands thrive on their relationship to consumers, and consumers buy it because it’s local and independent. That’s what you’re buying when you buy craft beer: its independence.”

Stephen Smith says that identity as an independent, local company is exactly how the brewery intends to return from its lost years as a part of an NZX corporate.