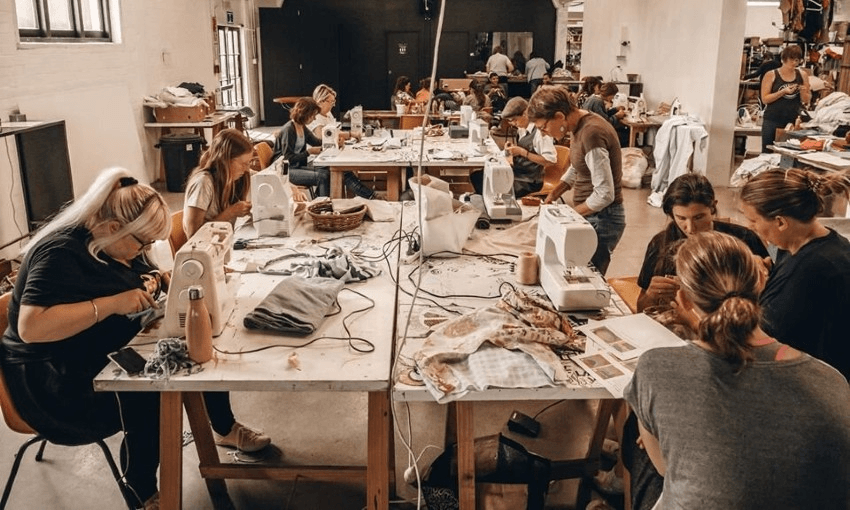 By Steven Moe
Guest writer
Made possible by

Having already faced a devastating earthquake, Christchurch knows the value of community in times of crisis. Now in the wake of Covid-19, a popular creative hub is expanding its mission to bring more people together.

Whether it’s a beautifully restored building or a brand new office block, the reminders of the earthquake take many forms in Christchurch. Still, there’s a sense of community in the city that transcends the buildings, and it’s being nurtured through creative projects like XCHC: Exchange Christchurch.

Sitting in an industrial area beside panel beaters, factories and the now-demolished stadium, the converted pickle factory might be inconspicuous, but it’s worth seeking out. This is more than just an old building; it’s a hub for the revitalisation of the Christchurch arts scene.

There are four main parts to XCHC: A “makerspace” consisting of 22 resident artists in studios and an open plan area where the artists work; a showcase space for creative events and exhibitions; a café and bar; and accommodation in an upper level for casual artist residencies.

Since XCHC was founded in June 2013, more than 130 artists have used the studios. There are frequent ad hoc art exhibits, and the walls are often adorned with new layers of street art. The aesthetic is seldom the same for long.

XCHC serves as a hub through the week and the weekends as well, with artists and art lovers connecting at events, concerts, lunches and more. Everyone probably experiences it from a different angle – my 12-year-old daughter and I recently attended a class for her to learn how to create pottery, and I’ve hosted ‘impact lunches’ there for 40 or more at a time.

Director Preston Hegel has been helping the arts community flourish at XCHC for several years. He remembers first arriving in this far flung corner of the world – a long way from his US birthplace – and being impressed straight away.

“I walked in, in March 2016, and at first I was just grateful to find a place where I felt welcomed, and very quickly sensed it was where people could grow and find belonging. I’ve been to creative spaces before and I’m from a very creative city, but hadn’t felt anything like it; almost like the feeling of ‘home’ in a strange and interesting place.

“It was different, so I was curious, maybe even confused, and I liked it. It felt like an honour to be among artists, and people who saw the world differently; over time I realised I was one of them. I stayed because I realised that feeling is a gift I can offer others.”

The XCHC website says it “cultivates a creative ecology”, and describes itself as a “for purpose” business, set up to provide “a place for creative practitioners to develop their practice, share ideas and knowledge, and connect with others”. Founded to address the lack of creative spaces after the earthquakes, it’s evolved to become an integral part of the Christchurch creative scene; a place where people come together to exchange and develop ideas.

The restrictions during level four lockdown quickly demolished XCHC’s 2020 plans and business model. But then a call went up on creative fundraising platform Patreon. The response was gratifying.

“We were tracking well between one-off donations and new Patreon members,” says Hegel, but then “after three days, a donor put in $14,000, taking us to our goal.”

The crowdfunding campaign was “eye-opening” in a number of ways, says Hegel. He realised how big a difference one individual can make to an organisation’s livelihood, and how donors’ support “affected and will continue to give hope to so many, especially creatives who could maybe only give a little and were afraid of losing a valuable resource like XCHC.

“In an industry often at the mercy of funding, our freedom has its risks, but it’s totally worth it.”

As well as the one-off fundraiser, Patreon supports XCHC with monthly donations; the number of individual donations jumped from 65 pre-lockdown to 139 after the appeal went out. That support is allowing XCHC some more breathing room and space for new creative rhythms to emerge.

XCHC founder Camia Young says the the hub continues to grow, bringing surprises and creative growth for the community it serves. “I marvel at how well it serves its purpose. I was at XCHC yesterday working with a group on a new business to build tiny homes out of hemp. A woman at a table near by heard us speaking and came over to introduce herself, she had three connections right away for the Kohu Hemp team.”

“This is what XCHC is meant to do, it literally fosters creative growth by connecting people. It warms my heart when I see it, and knowing this happens every day thrills me.”

So what does the future hold for a place like XCHC? Hegel says because it embodies the change needed for a business to flourish post-lockdown, it’s surrounded by new energy and opportunities.

“Some were inspired by what we achieved during lockdown and are moving to Christchurch to be a part of what’s next. Our biggest problem now is we need a bigger space for everyone! XCHC used to be just a place, but now it’s also a community of free spirits united in the pursuit of experiences beyond the pale of mainstream society… pushing the edge of their creative skills, experiences and growth.”

As a Christchurch community-focused venue, XCHC captures the essence of the post-earthquake spirit and desire to create new ways of being. Now, in the fallout of Covid-19, it plays an even more critical role as a hub for people to come together and create community.

“It’s important for creatives to feel safe and looked after,” Hegel says. “That’s usually when the real creativity shows up, and in a lot of ways, it feels like we’re just getting warmed up.”