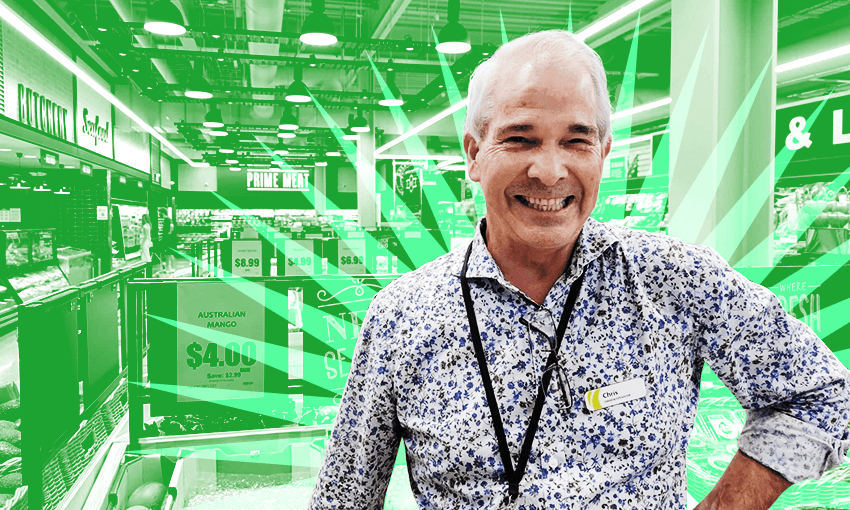 Meet the struggling supermarket owner determined to make it work

He’s losing money every day his new supermarket stays open. So why’s he selling blocks of Whittaker’s chocolate for $3?

Chris Harris arrives at his new Tāmaki Makaurau supermarket before 6.30am most days. He unlocks the doors of FreshChoice Greenlane, greets customers, fixes up the flowers, cleans the bathrooms, checks over the floors, then heads down to the storeroom to make sure stock flows for promotions are running smoothly.

He’ll help out wherever he’s needed – restocking shelves, scanning groceries, and even helping make coffees and doing dishes in the supermarket’s neighbouring French cafe. As we talk, I can hear him checking Lotto tickets. “Sorry darling, not a winner,” he tells a customer.

At 70, Harris is busier than most his age, joking that he can’t even spell the word “retired”. Since his second FreshChoice supermarket opened in November, he’s there most days, putting in 80-hour work weeks along with his wife Juliette, starting at 6am and staying there until 6pm. “Then I go home and do all my admin,” he says.

Lately, though, all that work hasn’t come with any rewards. While his Half Moon Bay supermarket is a beloved community hub, trying to do the same thing in Greenlane has been problematic. Construction started on the supermarket in 2015, but the store didn’t open until November, 2021, thanks to a “nightmare build”.

Finding good staff has proved difficult, and opening in the middle of the Covid-19 pandemic was also troublesome. “It [was] an absolutely stupid time to open,” says Harris. “It’s mid-November, it’s nearly Christmas. People don’t know who you are. You’re a new brand.”

Making matters worse is the constant shoplifting. Over Christmas, Harris lost $2200 worth of liquor to three different shoplifters in just one hour. This past Friday night, three people attempted to smash in the front door with a hammer.

Harris owns the store, so all of those extra costs come out of his own pocket. After the supermarket build went millions over budget, it’s starting to bite. “We haven’t recovered. We’re underwater,” he says. “Last week we lost $25,000. It directly comes out of my wazoo.”

It hasn’t changed his mindset. Harris has dreamed of owning a Greenlane supermarket for years, and he’s determined to make it work. It is, he says, about building community. “You’ve got to remember … you’re dealing with people who have everyday needs,” he says. “Their lives may be a nightmare. If we can offer them something easier, we do that. It’s a personal touch.”

Harris doesn’t have a back-up plan. “We’re here for the long haul. I have a long 30-year-plus lease here. I know at 70 that will see me in the grave,” he says. Then he jokes: “I need to be off the streets. That’s a good thing.”

His persistence may be about to pay off. Earlier this week, Harris’s daughter Sarah took to the local community Facebook page to promote her father’s supermarket. She’d seen him struggling, and wanted to help. “This store has been very difficult,” she wrote. “Everything that could go wrong has gone wrong … If he doesn’t get more local support I really worry about what will happen. I am very kindly asking if you could please support my dad.”

Her post has gone viral, receiving hundreds of messages of support from all around the country. It’s turned people’s attention to Harris’s store, which has been swamped by new customers. He’s had people volunteering their help, and a local burger chain offered staff free lunch.

“Things have gone nuts,” says Harris, who woke to a barrage of messages from his newfound supporters. “I’ve been terribly humbled by the fact that people have supported it. I didn’t expect that at all.” His daughter says the love is deserved. “He’s got the best attitude, even when shit hits the fan,” she says.

Harris believes it’s recognition of his community spirit. “We’ve seen a whole bunch of people coming in because of the post,” he says. There, they’ll find Harris is selling 250g blocks of Whittaker’s chocolate for just $3, easily the cheapest price across Aotearoa.

How can he afford to do that? He says he can’t afford not to. “Everyone buys it, they get it, they share it. We don’t make much money out of it but it generates good [feelings],” he says. As we talk, he tells a customer who has just purchased five blocks: “That deal’s going to be up there till Sunday.”

It’s the same reason Harris offers half-price coffees to emergency services staff, and goes out of his way to track down products requested by customers. He’s well aware supermarkets have a bad rep right now, thanks to the outcry over alleged price gouging by the duopoly. (FreshChoice is owned by Woolworths under an owner-operator model, giving Harris more scope for brand selection and additions like the cafe.)

But Harris is trying to change that attitude through sheer stickability. That’s why he’s there every day, cracking jokes with customers, checking Lotto tickets, and stocking the shelves. He’s fighting the good fight, and he’s not giving up any time soon. “It’s easy to be generous with people,” he says. “It’s hard to be a bastard.”