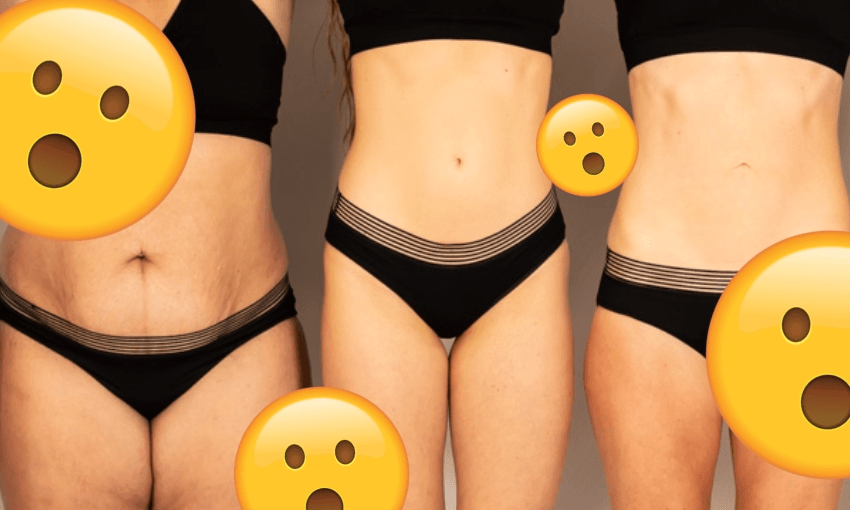 Alex Casey talks to Michele Wilson of AWWA, New Zealand’s first brand of period proof undies, and takes a pair for a spin.

It does seem pretty wild that you can 3D print yourself a sex robot in 2018, but there still isn’t the technology widely available to stop period-havers from bleeding through their pants, skirts, shorts, jorts and dresses. Imagine living with a period without ever having to tie your jacket around your waist, or hastily reassemble the couch pillows to hide a mini murder scene, or moonwalk backwards, far away from your friends, your families, your colleagues, forever.

Beginning over a glass of wine, like all good things, two women in Te Atatu have made that dream a bloody reality. Michele Wilson and Kylie Matthews have just launched New Zealand’s first period underwear company via this kickstarter campaign to pre-purchase from their first December batch. With four daughters between them, they couldn’t ignore the growing dissatisfaction around pads, tampons and the endless amounts of sanitary waste.

“We really started having conversations about the current options we have for managing our periods,” says Wilson. People are cheers-ing menstrual cups across the country, but what about everyone else? “Kylie was happy to use a cup, but that wasn’t something I wanted to explore. After having two kids I just didn’t want to insert anything in there, and it didn’t really sit well with me to hold the flow in my body all day.”

The pair began exploring their options, perplexed as to why the world hadn’t caught up. “We just thought: our iPhones are updating every six months, surely the technology is out there somewhere to make underwear that can hold your flow.” They looked overseas, to brands like Thinx and ModiBodi. “They were all fantastic but, due to the New Zealand dollar, incredibly expensive.” Another issue overseas, aside from shonky feminist ethics, was the sustainability of the materials used.

“We began talking to manufacturers to find out if the technology exists for bamboo fibres, because we knew they were super absorbent.” Not long after, they found a small family-run business in Sri Lanka with strict ethical practices. Why not make them on home turf? “We would love to manufacture here, but unfortunately the technology doesn’t exist in New Zealand,” Wilson explains. “To bring it over here would almost defeat the purpose of what we are trying to achieve – creating affordability.”

Conjuring up bleedable underwear was no easy feat, with Wilson citing “a lot of brave trial and error” before getting to the final prototype: a pair which holds up to two tampons worth of flow. I know. I nearly dropped the phone when she told me, too. Two tampons to me feels like approximately a pint worth of blood, but I was willing to hear her out. It’s all about layers: bamboo fibres, an anti-bacterial layer, an anti-moisture layer, a leak-proof layer. “I completely forget that I’m on my period these days.” I never forget.

I had to try them for myself. Armed with two pairs sent to me for review by I am Eva, I checked my calendar and waited for the big day. It only took the first drop to fall for me to chicken out completely, and chuck in the moon cup faster than you can say “Carrie goes to prom”. To be fair, the stakes were extremely high – it was the last episode of our TV show for god’s sake – but I still popped them on as a safety net of sorts. Any menstrual cup user will know that, save for taxes and death, nothing is guaranteed. Things could be fine, and then you sit down the wrong way and you’re… Simply Red.

The real test came the next morning, when I embarked on what could definitely be described as an “epic roadie”. While we’re oversharing, here’s a weird thing about me: I seem to always have a code red in Wellsford. Maybe it’s that I always forget driving up north takes ages, maybe it’s my body panicking that I am getting too far away from the city, maybe it’s just that I delight in upsetting my friends and family. It’s happened three times, and it happened in my I am Eva’s.

After doing the customary, baboon-style display of the butt to my nearest and dearest, who assured me that nothing was visible, I remembered that I was wearing stone cold SCIENCE underpants. They feel a little bit thicker to the touch than your average – more like boy cut togs than a mesh Lonely waif – but I figure that’s the kind of security you want when the lining of your womb is rudely trying to exit your body.

Realising that the bloodshed was completely, comfortably contained, I got brave. I got William Wallace-level brave. From Day 4-6 (not Day 3 because Day 3 is literally The Shining lobby pour moi), I went cup free. Once you get over the fact that you are basically wearing a space age adult diaper, it feels freeing to the point of subversive. All I’m saying is, I briefly thought about peeing a little bit just to see what would happen. To be clear: I didn’t. But I did think about it.

I’ll admit there’s a bit of admin involved with using period proof underwear, in the same way that there’s admin involved in being alive. If you’ve got a heavy flow, you might burn through two pairs in 24 hours, and you’ll probably have to do more washing than usual. It’s a bit of an upfront cost for multiple pairs ($34 each), but so is a menstrual cup. “I really feel like this is going to change the game for all women,” says Wilson. “It’s been interesting because a lot of women have been quite sceptical – they are often the ones who grew up,like me, with only pads and tampons being normal.”

So if you can handle a more conscious washing routine, the other layer to I am Eva is that both owners are determined to do their part to combat period poverty in New Zealand. “We call it bleeding heart sustainability,” says Wilson. “I think it’s awesome what Countdown are doing by dropping the prices of pads and tampons. That’s great for the middle income families, but the reality is that women suffering from period poverty have zero budget for menstrual products.”

I am Eva intends to donate 5% of the underwear manufactured back to the high schools, the charities and the people living with period poverty. “It just drives us crazy what’s going on, women are missing work and missing school and that’s not fair. Boys and men don’t have to go through that, but there are girls out there missing really important hours of school which is just insane.”

While the name I Am Eva might not exactly roll off the tongue when talking about a pair of underpants, it has significant meaning for Wilson. “For a start, Eva is my daughter’s name, and I did this for her. But we also wanted to portray the idea of demanding better options. You know, I’m a modern woman so, when I think of I Am Eva, I think of every single modern woman in 2018 demanding better options for themselves.” As a modern woman in 2018, I know what I’ll be packing next time I’m visiting Wellsford.