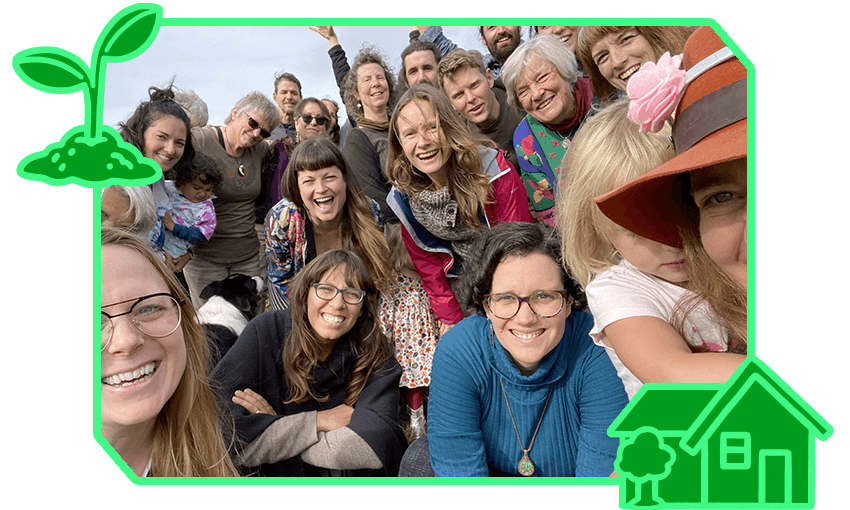 Shared spaces, playgrounds and community gardens. At a co-housing project in Golden Bay, residents see property as more than an asset. Steven Moe pays it a visit.

“We’ve been told that we need to live in isolation, to have our own house away from others, to have our own land to be safe,” says Simone Kidner, one of the founders and first residents of an innovative housing project in Golden Bay. “What this has done has pushed us away from each other and led people to be disconnected from the whenua.”

Kidner, an Edmund Hillary Fellow originally from the UK, will soon be living in a unique space. Instead of rows of townhouses that maximise space to cram in as many people as possible, the Tākaka Cohousing Neighbourhood offers an alternative way of living, one based around community.

It started in 2020 with the purchase of land that used to house grazing cattle in Tākaka by Mohua Ventures. Several people pooled together money to purchase the land and begin creating a unique venture. This week the project broke first ground to prepare for new homes to be built.

Kidner has personally invested in the project and is leading its development. “The cohousing model is key in allowing us to have the privacy we desire but also learn how to connect and share with others and come together to be kaitiaki of a larger piece of land.”

As Leonie Hayden explained in this 2019 piece for The Spinoff, modern cohousing has roots in Scandinavia but also many parallels with pre-colonial Māori ways of living. The Tākaka Cohousing Neighbourhood follows in the footsteps of Auckland developments like Earthsong and the more recent Cohaus, along with iwi papakāinga like Ngāti Whātua’s Kainga Tuatahi.

The development is the first of three intended neighbourhoods that would share a common parkland of seven hectares, including a native forest area, intended market farm, peace gardens and walkways/cycle paths that can be enjoyed by residents and the wider Golden Bay community. The stage one development will accommodate 34 two to three bedroom units for 100-120 people, with plans for similar numbers in the subsequent stages. The project has a very long-term vision and is now selling the final few lots before construction starts.

Community programmes amplify the vision, with seminars and tours planned for neighbours, nearby schools and visitors who come to learn about the land regeneration and sustainable building practices.

Venture inside and you’ll instantly be able to see their organic principles on display. Instead of concreting as much as possible, there’s a focus on regenerating the natural environment. Trees and bushes are planted using principles drawn from the permaculture movement, an approach to land that seeks to copy natural ecosystems, which is in contrast to western industrialised approaches.

This aspect of the project draws on the wisdom of the local people and te ao Māori, in particular the idea that we are guardians of the land rather than owners of it. Manawhenua ki Mohua have been involved in the project and in 2021 gifted a mauri stone to the community that was buried during a pre-dawn ceremony directly underneath where the proposed common house will stand.

To enshrine this purpose and ensure the project has focus, a charitable trust, Te Hapori Hauora, was created. The name was gifted by mana whenua to honour the sustainability of the project and the focus on the wellbeing of the land. In a similar way to how the Whanganui River has been granted legal entity status, this is a form of private recognition of the value of this plot of land and it could serve as a model that is adapted elsewhere. The principle is to use the legal structures already available as tools to create private legal recognition for certain land that goes beyond human ownership by adopting a trust structure instead.

Closely tied in with this focus on nature are the type of buildings planned. The average house size will be 103m² and buildings are a duplex design.

“We’ve opted to use double-storey units and duplexes to reduce the amount of land that would be required for the housing, creating larger shared gardens for growing food,” says Kidner. “We have compact, well-designed homes that have everything we need. We also have our larger shared home, the common house, for our shared meals and community events”.

The project has a very long-term vision and is now selling the final few lots before construction starts. Simone reflects: “This is an innovative way of thinking about not just a co-housing project but also a more holistic view of embracing the surrounding land and its regeneration, building sustainable eco-friendly homes as well as promoting community for the residents. Our hope is that this project, which is able to weave together elements we increasingly know are important like nature, housing and community, is something that could be done in other parts of the country as well.

“If we were to do that, then just maybe our old conceptions about housing itself just might start to change”.

Steven Moe is a partner at Parry Field Lawyers and provided legal advice to Mohua Ventures.