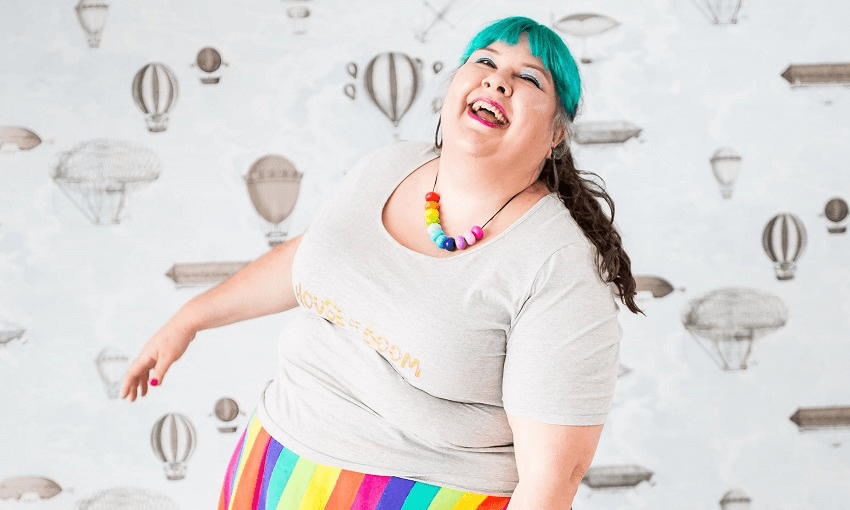 Joanna McLeod was so frustrated by the lack of affordable, ethical clothing options that she launched her own ‘fatshion’ label in six months. (Photo: House of Boom.)

Joanna McLeod was so frustrated by the lack of affordable, ethical clothing options that she launched her own ‘fatshion’ label in six months. (Photo: House of Boom.)

Most labels for bigger people aren’t plus-size enough and the larger price tags that go them are “bullshit”, a new Wellington business owner says.

A Wellington fashion entrepreneur says the “fat tax” charged on larger sizes is one of the drivers propelling her to build her own plus-size clothing line.

House of Boom is Joanna McLeod’s answer to what she sees as a gap in the market for quality, affordable and ethical ‘fatshion’.

Frustrated by the lack of options for clothing above size 16, McLeod fired off a tweet last June that quickly snowballed from idea to reality.

When my ship comes in, I'm going to start an ethical fat people clothing company called Everything Has Pockets and I'm going to make so much fucking money it'll be ridiculous

The “fat tax”, long seen in bras above a C cup, often extends into clothing lines where the rationale that more fabric should mean higher price tags hits the wallets of fat people the hardest, she says.

UK fashion company New Look was called out by plus-sized consumers for charging 30% more for pieces in its Curve line than the same items in its standard range. “Fabric costs are basically one of the lowest of all your costs, especially if you’re buying at scale, so this fat tax is bullshit,” McLeod says.

Many clothing companies that do a plus size range also only go up to a size 24, which just isn’t high enough for some consumers, she says. New Zealand-based ethical clothing company LaLA’s largest size of 3XL is equivalent to a 22, and its dresses will set you back $300-$500. Fast fatshion company City Chic also has a size 22 ceiling, and although its dresses start at a much lower $100 price point it’s still way above the $30 staples available at Glassons, she says.

Shopping ethically adds another layer of complication to the issue, one that McLeod herself was struggling with. “I have money, ethical companies! Take my money. Why was no one catering to me?”

Put it all together and it dawned on her that “someone should set up an ethical but affordable clothing company for fat people. Turns out, that person was me.”

It took just six months from that frustrated tweet to the launch of House of Boom’s first colourful size 16-30 range in December.

McLeod is a seasoned communications professional in her day job so jumping headfirst into a world of strategies, budgets, partnerships, and marketing wasn’t so frightening for her. Yet there would be setbacks.

The biggest decision she had to make was space. Although she had always planned to sell online she also wanted a bricks-and-mortar storefront of “racks bursting with goodness, and a big, comfortable, accessible changing space”. Her accountant was quick to put the kibosh on that dream.

“It seemed like every idea I had, he disapproved of. No, I shouldn’t take an investment from a friend keen to support me. No I absolutely could not afford to open up a retail space, especially if I was thinking of only opening it on weekends as a destination. And I definitely shouldn’t do it in a cheaper area of town like Newtown because people would then associate it with low quality op shops. I left his office utterly deflated.”

McLeod settled on hosting seasonal pop-up shops in her Thorndon home to complement the online store.

She is quick to point out that the business got off the ground because she started from a position of privilege. “Getting money to start House of Boom was ridiculously easy. The bank hardly looked at my business plan. I know this is because I said I was keeping my full-time job, and because I also have my mortgage with them. Thirty minutes later I was pre-approved for an overdraft of up to $10,000. Not everyone has such easy access to cash.”

House of Boom’s key points of difference are that the clothes are ethical, comfortable, stylish, affordable, and cut for fat bodies. Her genesis tweet was the beginning of her market research. “I was linked to a company that said they were ethical. I looked at their site. Almost everything was black, over-embellished, and polyester. And $400 for a dress? And they only went up to a size 24? Honey, no.”

Her path was becoming clearer. Cotton, simple, and colourful clothing was what consumers wanted and needed, so McLeod began making contact with manufacturers. “Nisa, the company that employs former refugees, pointed me towards Iona at Umsiko and I will be forever grateful.”

Iona Woolgrove runs her one-woman company Umsiko and is House of Boom’s production manager as well as its pattern maker. This partnership has become the bedrock of the fledgling fashion label. “Essentially I bring problems to Iona and she solves them,” McLeod says. “She takes my clothing ideas and turns them into samples, that I then try on. We fix them to make them perfect, then she drafts the patterns.”

McLeod has quickly learned some hard lessons about the manufacturing stage of production. She lost $1000 after a misunderstanding over dates with an offshore t-shirt maker, and has brought the manufacturing home. “I had to consider it a learning experience and not focus on what else I could have done with that money.”

Now Umsiko’s seamstresses work in their own homes around Wellington and are paid above the living wage, so all House of Boom clothing is made locally and ethically. Manufacturing locally makes it more expensive, with t-shirts starting at $30 +GST and fabric costs on top of that. There are also surcharges for ordering small amounts so McLeod tries to get at least 20 of each item made at a time.

However it all aligns with her business ethics, which include giving back to the community. A portion of the profits from House of Boom’s Rainbow Collection has gone to InsideOUT, a national charity for LGBTI young people. If it all means it takes her longer to quit her day job, so be it. “I won’t quit until I can make $90,000 a year from Boom,” she says.

The House of Boom website launched with underwear and jewellery from other brands in August 2018, and the first Boom-branded clothing hit the site in December backed by a pop-up weekend at McLeod’s home.

She has rallied a troop of plus-sized models she refers to as the Boomettes, “wonderful friends of mine who gave me their time and looked amazing modeling for me”. Seeing a range of bodies modelling the clothes makes a difference for online plus-sized shoppers who often have to take a punt that an item will fit and look good, she says.

McLeod has made other valuable discoveries. Firstly, if you’re hosting a pop-up, invest in good quality clothing racks, because “$13 is too little to pay for something that will be holding up your hopes and dreams”. Second, always get someone to check your work. The 100 or so items from the first season which proudly claim to be manufactured in “Aoteaora” are destined to become collectors’ items. Thirdly, and perhaps most importantly for a clothing line aimed at those who are not usually catered to by fast fashion, sizing is everything. “The skirt sizes were way off. The size 1, which was supposed to cater to sizes 16 and 18, was more of a 20/22.”

House of Boom is gearing up to launch season three later in 2019, with five new products: two dresses, a skirt, a robe, and a t-shirt. “There will probably be about 100 items in season three. It’s an expensive hobby, trying to make life easier for fat people.”