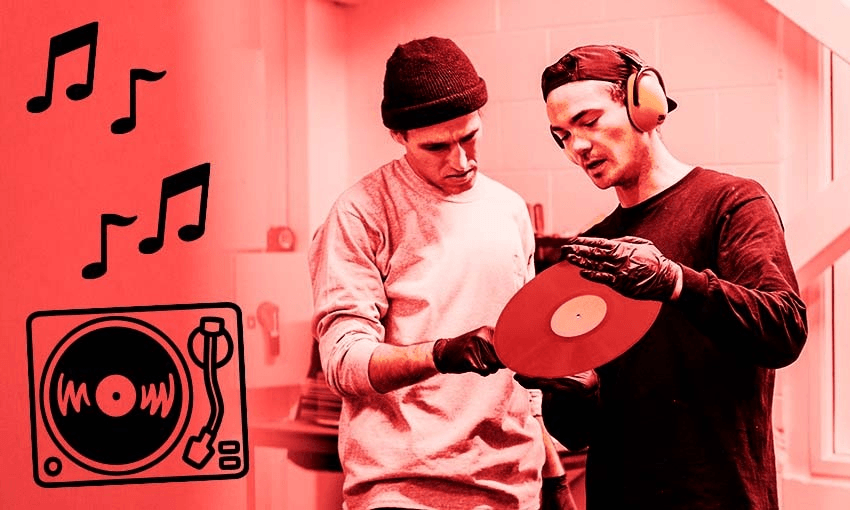 Two friends, one dream, no holiday: inside NZ’s only vinyl pressing plant

It’s called Holiday Records, but for those working on the frontlines of the turntable resurgence, there’s barely been time for one.

“We live it and breathe it,” says one staff member at New Zealand’s only vinyl pressing plant. He’s standing in front of a pile of freshly pressed records, holding each up to the light, checking it over for imperfections. Once it’s approved, it will be slipped into a protective sleeve, then a cover, shrinkwrapped and boxed, waiting to be purchased and played on a turntable at home.

The problem? On a recent Wednesday morning, the album in question was from a major artist signed to the famed Seattle label Subpop, one so hot off the press it’s not due for release for another three months. A perk of a job like this is getting to hear highly anticipated albums earlier than others. After all, it counts as quality control.

Could The Spinoff perhaps have an early listen? Joel Woods, who runs New Zealand’s only vinyl pressing plant with his friend Ben Wallace, shakes his head.

“This,” he says, mega ironically, “is off the record.”

Woods and Wallace can be found at their noisy inner city pressing plant most days, working at the coal face of the vinyl resurgence. Thanks to an idea they had three years ago coming to fruition in a big way, business is booming, expansion plans are in full swing, and they, along with their two other full-time staff members, are no longer able to live up to their name. “We should have called it Anti-Holiday records,” jokes Wallace.

Thanks to a six-month backlog of orders, the fact they’re New Zealand’s only pressing plant, and one of just three across Australasia, Holiday Records is at capacity. To pump out up to 1300 records a day, staff can be found there six days a week from 6.30am until close to midnight. It’s like running a cafe, “and a restaurant,” jokes Wallace. A wait list six months long means they’ll soon move to seven days a week to keep up with demand.

They’re not done yet. By the end of the year, things are about to get even more crammed on their central city site. A second custom-built press will arrive from Toronto, meaning that, with twice the staff, they’ll be able to double their output. By then, their small site will be at capacity. “We’re going to take over the whole carpark,” says Woods. “Or we’re eyeing up a new location.”

All this work means Woods and Wallace have been forced to keep a few secrets lately. Demand from record labels for their services means they’re entrusted with new albums from major artists. At the moment, they’re working through back catalogues for Lorde, Johnny Cash, Crowded House and Tame Impala — albums that have been out of print and hard to get for months.

Being able to press records from their favourite artists or listen to albums ahead of a release date is a major perk of their job. Being able to go on holiday is not: Woods and Wallace were only recently able to take their first break since they opened, closing for two weeks over Christmas. They don’t know when their next one might be.

It hasn’t always been this way. Holiday Records began when Wallace’s old Hawke’s Bay folk band tried, and failed, to get an album pressed on vinyl. No one in New Zealand could do it. “It was like, ‘Why isn’t there one here?’,” says Wallace. With Woods, the pair investigated what it would take to open a pressing plant, talking to other owners around the world and flying to Toronto, Canada, for training.

They realised it could be done, but it was a huge gamble. They had no experience, and didn’t know anyone else here who did. But they’d seen vinyl’s comeback first-hand. “We started to hear anecdotes of people going to dinner parties and taking records instead of wine,” says Wallace, “or of vinyl being given as gifts at weddings”.

Vinyl seemed to be on the rise. Their fortunes did not, and the bank didn’t see their business dreams in quite the same light. “We thought it was a bonus that there were no competitors,” says Wallace. Yet the lack of similar business models made banks sceptical. “They were like, ‘Why are you the only one?’ … but we got it in the end.”

That first year was rough. Records labels didn’t yet trust them, and they had to hustle for orders. Equipment sometimes broke down, a tiny hydraulic spring putting them out of action for weeks. When you’ve only got one press, time equals money. “There were some really tough moments,” admits Wallace. Yet they had no back-up plan. “Because of the gravity of it, you’ve got to make it plan A, B and C, and make it work.”

They – ahem – pressed on, focusing on making quality control as high as it could be. They also emphasised making things as environmentally friendly as possible, with PVC offcuts recycled as piping, and cooling water being re-used. And they learnt how to fix breakdowns themselves, stocking up on spare parts. News spread, orders got bigger. A request for 2000 Six60 records pushed Woods and Wallace to their limit. “It took us over two weeks,”says Wallace. “We had to press and  sleeve and shrinkwrap everything ourselves.”

Now, they’ve sped up, and everything is trending up. Since April last year, vinyl’s rise has been “exponential,” says Wallace. Up to 15 requests a day land in their inbox from acts or labels looking to get their vinyl moved up the supply chain. Overseas, wait times can be a year or more. Holiday Records is slightly more flexible: last year, when Ladyhawke’s vinyl pressing plans for her new album fell through, Holiday Records answered an SOS call and managed to slip her album in, completing a complicated marbled vinyl request.

Is it a fad? Will vinyl fade away like CDs and DVDs? They don’t think so. “Vinyl has just overtaken CDs (in sales),” says Woods. “It’s booming everywhere.” Wallace, who has kept rubber gloves on his hands throughout our interview, needs to get back to work. “It’s been astronomical,” he says. “We’re pressing far more than we ever thought we would be.”

Read more: ‘People froth it’: Inside the craze for Aotearoa’s most sought-after record