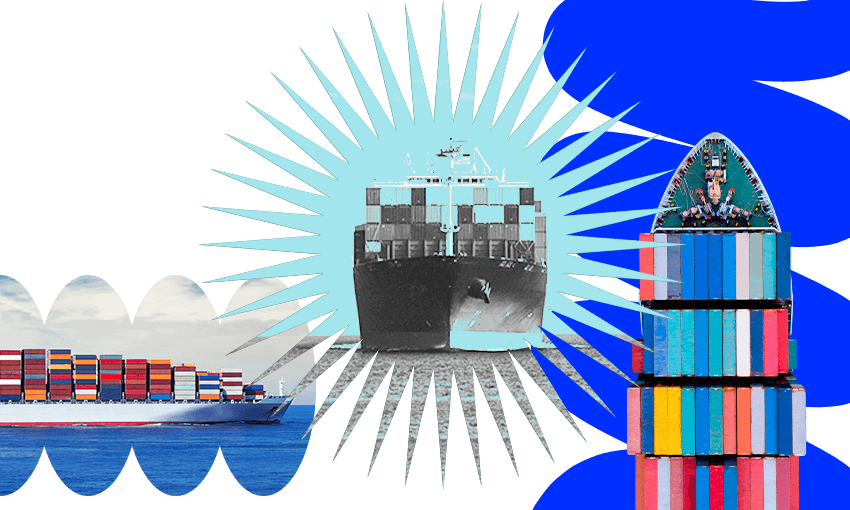 What’s causing the shipping crisis – and when will it end?

The price of everything is going up and if you want to buy stuff from overseas you might have to wait for months. So how is the global shipping crisis impacting New Zealand and is there any end in sight?

Being an island at the bottom of the world in a pandemic has definitely had its advantages. But it has also had its costs.

Those looking to buy furniture, bikes, building supplies, pet food – actually just about anything – are sometimes having to wait months for goods to arrive and are paying a premium for the privilege.

It’s all because Covid-19 has caused havoc for freight, shipping and making stuff in general.

The virus has revealed the fragile and delicate dance of global supply chains and the disruption is shaking the bedrock of globalisation: efficient, cheap and reliable shipping.

The crisis began last year as Covid-19 lockdowns and outbreaks temporarily closed and reduced capacity at ports around the world, sometimes for months at a time. Soon countries everywhere were experiencing major backlogs in shipping; now hundreds of container ships are sometimes stuck at sea, waiting days and sometimes weeks for dock space to unload. This means an enormous amount of shipping capacity is wasted and has had a cascading effect as delays at one port lead to further delays down the line.

That alone might not have been so bad, but it coincided with an unexpected boom in demand for goods, as millions of people locked down at home realised how dissatisfied they are with their worldly possessions and spent their holiday and hospo budgets on TVs and appliances – anything to take their minds off the mind-numbing pandemic.

This led to a corresponding crisis in making the stuff we want to buy. Like the ports, manufacturing has been hampered by the pandemic as lockdowns have closed factories and frightened staff have stayed home. Early in the pandemic, many companies also decided to curb production in anticipation of a global economic crisis. When the boom in demand hit, production was already well behind.

The shipping delays also highlighted a vulnerability of the modern production technique known as “just-in-time” manufacturing, where manufacturers keep very little of the components they need in stock to reduce the cost of storage and wastage. But it makes them supremely vulnerable to any disruption in the supply chain. There have been reports of these disruptions resulting in manufacturing times increasing 10-fold, sometimes due to delays in delivery of a single component, like a microchip. The Covid disruptions have not only caused a delay in getting goods to market, but have also created waves of demand for shipping as manufacturers ramp up production to clear the backlog.

The delays and shortages have led to importers and manufacturers hoarding products and components when they can get them – a move from “just in time” manufacturing to “just in case” – compounding the demand for goods and shipping capacity.

Added to the mix is a worker shortage, which has meant there is a lack of truck drivers to clear containers from ports in some countries. The disrupted web of shipping has also seen empty containers stack up at some ports and a lack of empty containers at other ports, adding to the shortage and resulting in ‘ghost ships’ – empty ships plying the seas to pick up empty containers.

Shipping companies, however, have been making record profits out of the crisis and there have been accusations of price gouging. Some have pointed the finger at the three major shipping alliances that control 80% of the market. In New Zealand, importers have claimed the price of freight for a shipping container has increased four-fold and that has largely been passed on to consumers.

For importers and exporters it’s been a nightmare year.

“It’s the most difficult year I can remember in my 30-year career,” says Chris Edwards, president of the Customs Brokers and Freight Forwarders of New Zealand which represents the country’s major forwarding and logistics companies.

He says the crux of the crisis has been the unexpected peaks and troughs in shipping demand due to backlogs at ports caused by Covid-19 disruptions. Demand for shipping has only increased about 5%, but whereas  peak times like Christmas can be planned for months in advance, now the peaks are coming out of the blue.

Edwards says NZ has been one of the countries most impacted by the crisis – not only are we an island nation heavily dependent on shipping, but we are at the very end of shipping routes, meaning we experience all of the delays further up the line.

“We are the Stewart Island of the supply chain. By the time you’ve had three or four delays on the journey down, we’re always on the worst end of it.”

While countries in Europe and the US have been able to divert some shipping onto trucks and rail, NZ has no other option to trade with other countries.

While most people are impacted by the delays in imports, some exporters are feeling the crisis more acutely. A recent ANZ report said that big companies like Fonterra have agreements with major shipping companies and have been relatively unaffected, but smaller exporters are struggling to get their goods to market. For exporters of perishable goods with a short shelf-life it can be disastrous if a ship or flight is delayed or cancelled.

So is all of this the reason why the price of almost everything has gone up and inflation has reached the highest rate in more than a decade?

Not entirely. Sense Partners economist Shamubeel Eaqub says the impact of shipping and the related supply chain disruptions may be overstated. While inflation increased 4.9% over the past year, he says shipping-related issues only contributed about 1% of that.

The cost of shipping is usually a very small part of the cost of goods, he says. The increase in demand for goods and the shortages and long wait times for imports has been a bigger factor.

“Because spending is up and there are shipping and manufacturing delays, businesses haven’t been able to restock as quickly as they would have liked and when you don’t have the inventory, you’re unlikely to offer a discount.”

But the price hikes have gone beyond the costs associated with the shipping crisis, he says.

“High demand has also meant businesses have the ability to increase prices, knowing people will pay. So while costs have gone up a little bit, profit margins have also increased so the prices are increasing more than the added costs.”

However, Edwards says for some importers the increase in shipping costs has been terminal.

“If you’re importing tissue paper, and your shipping cost is more than 50% of landed costs, you probably don’t have a business.”

The toilet paper brands Quilton and Savers closed in NZ last month, citing the high cost of shipping paper pulp from other countries.

So when will the delays, disruption and price gouging end?

There are signs we are past the peak of the crisis. The Baltic Dry Index of shipping costs has fallen by more than 50% since peaking last month, although it is still well above pre-Covid levels.

Edwards expects it will be at least a year until shipping returns to normal – either as shipping and manufacturers work through the backlog, or due to a drop in demand.

But he isn’t convinced that the recent drop in shipping is a long-term trend just yet.

“You’d want to see a much longer pattern before you can say the peak has finally been reached. Though I doubt we’ll see a return to the low rates we saw in 2019 for many years. I think the shipping industry has realised those rates were unsustainable.”

There’s also a large number of ships being built and while they will take a couple of years to come online, that should reduce costs.

Eaqub says we are likely to see the disruptions from Covid-19 dissipate and things should return to normal in the next year or two.

“I think shipping costs will come back relatively quickly, but I think production disruptions will not be able to catch up to global demand very quickly and most estimates say it will take one to two years.”

But globalisation has been built on cheap, reliable and efficient international shipping. With the system severely shaken, will it change the future of international trade and manufacturing for good?

“For some things that are really time critical the supply chains might become simplified. But for most things, the ability to access low costs [by having a global supply chain] is probably still going to be worth more.”

But he says local businesses are already keeping more stock on hand to weather future disruptions, as demonstrated by the “through the roof” demand for storage facilities.