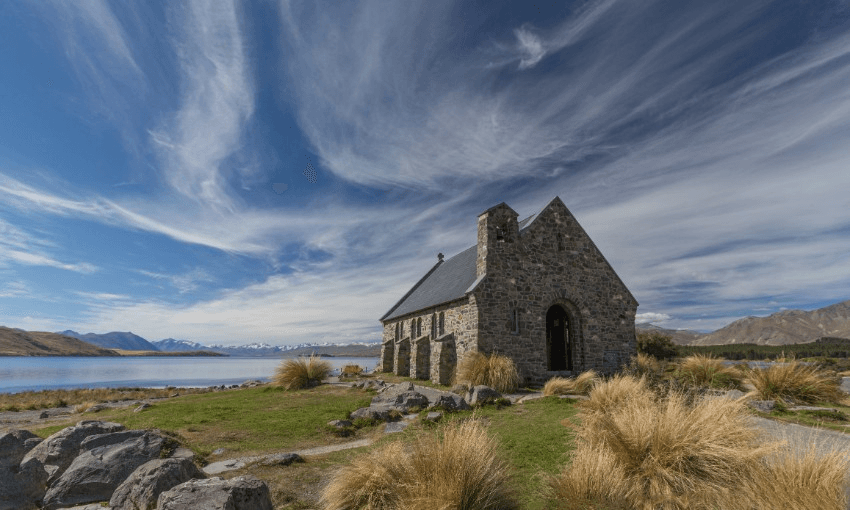 The lockdown sanctuary at Lake Tekapo

As New Zealanders await the end of alert level four and the chance to escape their homes, some are in such scenic lockdown refuges they won’t want to leave.

Every morning, the 11 residents at the Lake Tekapo Holiday Park wake up to silence. It’s dense and thorough – the kind that presses on your eardrums at high altitude. Sometimes there’s a fine blanket of snow on the hills. It lingers through the early hours, but as the sun crests above the Two Thumb Range and into the cloudless sky above the high country, it melts away into streams that feed the blue glacial lake.

In mid-April the water is too cold to swim in, so mostly the guests spend their days strolling along the shore, climbing nearby Mt John, or walking to the Foursquare – the only open shop in the empty town that was, until recently, one of New Zealand’s busiest highway tourist stops.

To Andrea Cox, manager of the holiday park, Tekapo under lockdown feels like it did in the early 1990s. For the moment, she says, that’s not an entirely bad thing.

“It takes me back 30 years,” she says. “We stayed in the campground as visitors nearly 30 years ago and back then you could walk all over the road. Then when my husband and I came to manage the holiday park seven years ago the town had gone crazy with international guests. Now there’s no traffic, it’s all gone.”

The town sits in the Mackenzie Country – an intermontane basin rimmed by snowcapped peaks and turquoise blue lakes. Because it also sits on the route from Christchurch to Queenstown, Tekapo has in recent years become an essential stop for international tourists clamouring to photograph the vista of the Southern Alps, the wild flowering lupins or the iconic Church of the Good Shepard.

While the hundreds and thousands of visitors each year have been great for local business, such numbers had put pressure on the region’s natural infrastructure and, for some, compromised the serenity that made it so special in the first place.

Although the sudden disappearance of the buses and the crowds ought to provide the much-needed respite for the environment, Cox is fully aware how difficult it will be for her and the other local tourism operators over the next year. Already one of the town’s major attractions, Dark Sky Project – which combined Māori astronomy and science – has shut down as a result of the vanished market.

“It’s going to be seriously tough and the international guests aren’t going to start arriving anytime soon,” says Cox.  “So we just have to think of other ways to get the people through the door. People are still going to be nervous about travelling, we know that. Obviously, like everybody else, it will need to be a domestic market.”

The holiday park has 19 staff, all of whom Cox is determined to hang onto. She was able to access the wage subsidy to keep them employed, but due to hygiene measures, most are waiting at home until they can return to do work.

“OK it’s great that it’s quiet, but as soon as we get to an alert level where we can bring back our staff, we’re going start doing maintenance and get in and paint all the units. It’s a good opportunity for us to do stuff like this.”

Three workers have been kept on to help Cox take care of the handful of guests living at the park, most of whom were tourists that arrived on the eve of the lockdown looking for a refuge. Many have since left on international flights departing from Christchurch, while the remaining few have been happy to see out the days under lockdown on the shores of Lake Tekapo.

“It’s been great having them here,” says Cox. “We’ve created a real Tekapo family. We’ll be really sad when they go and I hope they don’t before we start getting other people to visit us, but we’ve been lucky to have them. They’ve very much become part of our lives, and they’ve helped keep us sane, and busy.”

Strict hygiene and scheduling measures have been implemented around the camp, which has capacity for hundreds of guests and is therefore large enough for the 11 residents to go about their day without ever coming into close contact. Anticipating the need for hygiene protocol months ago, Cox equipped the facilities with hand sanitiser and gloves, and an efficient cleaning regimen means everything from the stoves to the door handles get disinfected before and after every use.

Cox has opened up the large TV room for the guests to use at scheduled times, but she says they’ve been content enough with the tranquil surrounds of the lakefront.

“They’re where they want to be. They’re happy. There are days when it’s tough for them, but they’re hardy Kiwis making the most of it.”

One of the guests is 74-year-old Maria Sorenson. Since December, she and her husband have been travelling around the South Island in their road chief caravan and spent the start of the year camping on beaches in The Catlins, a coastal forest park east of Invercargill.

After flying to Wellington for a family reunion, they returned to the South Island and were on the road south near Geraldine when news of the impending lockdown broke. They made a conscious decision to head to Lake Tekapo to spend the next month.

“I don’t think there could be a better place in New Zealand to spend a lockdown,” Sorenson says. “We arrived and parked where we were told to park but then so many people left the next day so we moved the caravan and now we have the best spot. We look over the lake and the mountains in one direction and the other way looks at the most beautiful sunsets.”

With the temperature dropping around the lake and the holiday park virtually empty, Andrea Cox gave the Sorensons use of one of the motel chalets if they needed a break from the caravan.

“The people have been very good to us here,” Maria Sorenson says, recalling the similar kindness that welcomed her family when they achieved their dream to migrate to Christchurch from the Netherlands in 1961. Back then, she travelled around the South Island and worked as a kindergarten teacher in Greymouth at a time when the notion of tourist crowds on New Zealand roads was inconceivable.

Last year the retired couple sold their house in Hamilton, and applied for a spot at a retirement community in Hawke’s Bay. When they last checked in December, they had moved up to 8th on the waiting list, and since then they have been using the time to enjoy the remote and beautiful corners of New Zealand.

While she’s not too worried about the coronavirus, she feels for all people whose lives have been dismantled by its economic effects.

“When I think about all the other people who we know: people who’ve tried to start a business or who have already got a business – what’s going to happen to them? It’s nice where we are but my heart just goes out to all the people who will lose their jobs, and the old people who can’t leave their homes anymore.”

She also knows how hard it is for the tourism operators in the small towns, so is intent on continuing their road trip as soon as the alert level allows it.

“We would like to be back by June because it will get quite cold. But we will go to Queenstown, Te Anau, Milford Sound, up the West Coast and through Nelson before heading back to the North Island.”

Having spent the last few months living in campgrounds, speaking with foreign tourists enthralled by the beauty of New Zealand, Sorenson has heard the word “paradise” used often. She knows why they use it, and she knows why millions come from all over the world like pilgrims to discover it.

Once the country starts to heal from Covid-19 and the lockdown, she thinks more New Zealanders should take the time, if they can, to rediscover paradise. Especially while it’s empty and quiet.