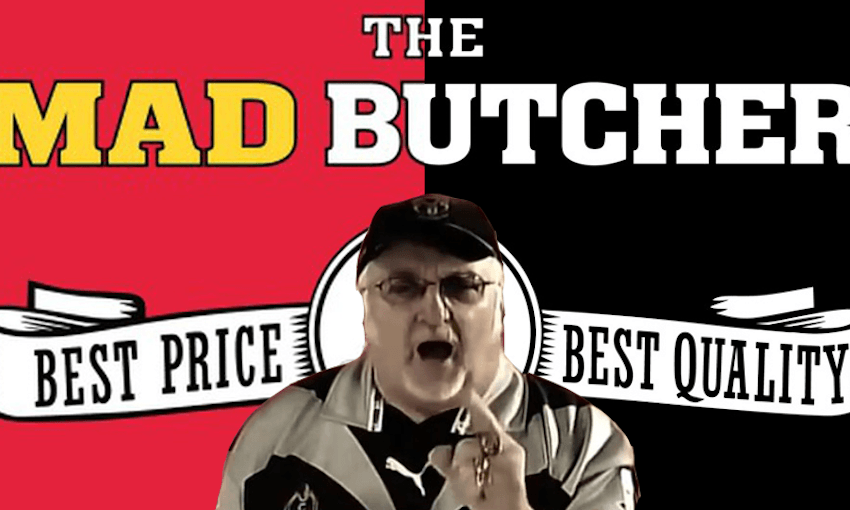 Welcome to the Cheat Sheet, a clickable, shareable, bite-sized FAQ on the news of the moment. Today: meet the new Mad Butcher, same as the old Mad Butcher?

Hooray! Your old mate The Mad Butcher is now back in family hands!

A press release proclaimed it is so: “With the Mad Butcher franchise back in family hands, new owners Michael Morton and Julie Leitch are making plans to grow the business and restore its sizzle. The couple bought back the business earlier in the year from publicly-listed company Veritas Investments, which owned it for five years.”

“Both Julie and I have a strong emotional attachment to the Mad Butcher brand, which of course was started by her father, Sir Peter Leitch, almost 50 years ago. We’re passionate about the brand and didn’t want it going anywhere else. The success of the Mad Butcher has always been about it being very much part of the local community, combined with the family-owned and operated nature of the stores,” says Michael.

Wait. Sir Peter Leitch, THE Mad Butcher, doesn’t have anything to do with the Mad Butcher?

Yup, Sir Peter Leitch, AKA The Mad Butcher, doesn’t own the chain which bears his name, and he hasn’t for quite some time. In May 2013, NZX-listed retail investor Veritas (shares currently trading at 15c) acquired the Mad Butcher business from Mad Butcher Holdings for a substantial $40 million.

Woah, the Mad Butcher is loaded!

Media reported at the time of the sale that the business (about 40 stores, some owned by the Mad Butcher company, some owned by Michael Morton and the rest franchises) was responsible for about $150m in annual sales. But things haven’t been going so well lately. Over the past few years numerous stores have gone bust, with Veritas chairman Tim Cook pegging rising beef prices, a competitive environment and a drop in chicken prices for the budget-conscious chain’s woeful performance. Sales had dropped to about $105m in 2017 and were expected to drop another $20m this year, and the number of stores was expected to also decline to 26 by the end of this month.

We’re not certain, but it’s highly likely most of the money was paid for the worst/best radio jingle in history, yes, the one about the beating of the Mad Butcher’s meat.

So Michael Morton bought back the Mad Butcher?

Well, you could say that. Or you could say it’s a former-owner current management buyout of sorts, as Morton was the existing chief executive of the existing company running the Mad Butcher business, and was also a significant shareholder in owner Veritas Investments due to his $20m in Veritas shares part of the deal, and up until June 25 2018 was a director of Veritas also.

What’s me old mate worth these days?

The business that sold for $40m (including $20m in cash) went for a paltry $8m (minus $700,000 owed by the five stores owned by Morton). ANZ is probably feeling a bit raw about it all, as the bank mostly financed the deal and is still owed millions, with a bit more than $4m recouped from the sale. Veritas has just managed to secure a cash transfusion, but it’s no wonder shareholders regret everything. They’ve also been pounded by an ill-fated investment in the gourmet supermarket chain Nosh. Veritas (and its shareholders) ate millions in losses before selling it for $4m, and is now in the process of suing the new owners. Toxic. The retail investor is a shadow of what it once was, although it still has the Better Bar Company. It still has Danny Doolans! I’ll drink to that.

Michael Morton is involved, so yeah. But, this change has put the Leitch back into the meat-pack specialist, with Julie Leitch a shareholder of the new company. And it’s gonna be different now, sole director of the new company Morton insists. “I was there, yes, but it was managed as a public company. Julie and I would have run things differently. And now we have the opportunity to do just that.”