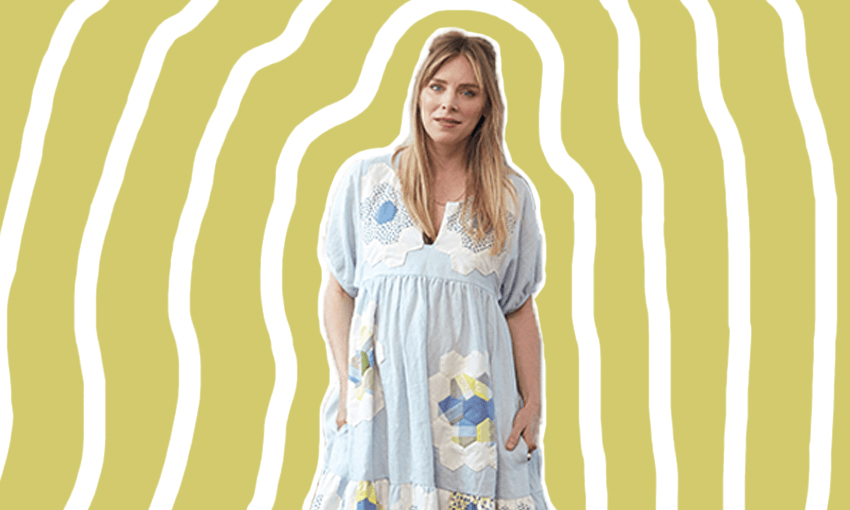 The New Zealand designer behind Rihanna’s lingerie has gone solo

Chloé Julian’s been supporting boobs for years under big names like Stella McCartney and Agent Provocateur. Now, home in New Zealand, she’s launched Videris, a lingerie line that focuses on comfort over everything.

After 15 years working in the lingerie industry, Hamilton-raised Chloé Julian knows the ins and outs of bras and knickers more than almost anyone. Over her career in lingerie, she’s designed and created for some of the biggest names in the industry, from Stella McCartney for Bendon and Agent Provocateur in London to, more recently, Rihanna’s Savage X Fenty, which she designed from New Zealand.

As lead designer, head designer and vice president of design respectively for these three brands, she’s put hundreds of lingerie sets to market – everything from lacy to basic – and now the internationally sought-after designer is launching her first solo brand, Videris.

A diploma in design at Wellington’s Massey University was the starting point for Julian’s now illustrious career in lingerie design, from where she was selected as one of four graduates to work at Bendon. She credits much of her knowledge about the intricacies of lingerie fit to her time there, where she designed for Bendon sub-brand Hey Sister.

“In my first job at Bendon we had to do the pattern making as well, so it wasn’t just drawing and sketching, and we would work with the machinists in the sample room and learn how to sew. It really showed me how to do the whole thing.”

Julian was only 26 when she took over Bendon’s Stella McCartney brand, moving to London, where she stayed for the next 10 years, designing for McCartney, David Beckham Bodywear (an H&M offshoot) and Agent Provocateur.

In 2017 she moved home with her partner and young son, but it wasn’t long before she was headhunted by Rihanna to take over the design of the first launch of the superstar’s lingerie label Savage X Fenty. Working from home, and flying to Los Angeles once a month for meetings with her US-based team, Julian managed to release the line in under 18 months. It was a short timeline even for a well-established brand, which at the time Savage X Fenty was not, she told Sonia Sly on RNZ’s My Heels are Killing Me podcast in 2018.

At Savage X Fenty Julian supervised a large team of designers and says at any one point, she could be working on up to three separate seasonal drops. “I would be on the concept stage of one, maybe the first proto stage of another and the final sign-off stage of another,” she explains, the exhaustion still palpable in her recollection.

So far, her new brand Videris is a small team – Julian and her business partner, as well as a handful of freelancers who help with PR, website design and social media, are it, and that’s the way she likes it. Videris has a much slower, more long-term approach to its designs than the brands she’s worked with previously.

“I can add a style when I feel like it’s the right time; it’s not about that constant newness and ‘this is in fashion, this is out of fashion’ and recreating it every time, because I don’t really think you have to do that with lingerie.”

Creating timeless pieces with the intention of selling them for a lot longer than a traditional “season” also helps to slow the cycle of manufacturing that makes the clothing and textile industry the second-largest polluter in the world. Julian noticed people recently started shifting their thinking when it came to shopping bags and straws, but weren’t noticing the plastics draped over their bodies.

“Plastic fibres are literally saturating the fashion industry. It’s so weird that we question plastic in every other part of our life but not in this one,” Julian explains. Videris garments are made of Tencel, a fibre made from beechwood pulp. It’s an incredibly soft fibre that also works to regulate temperature, unlike most plastic-based material.

Julian couldn’t have picked a more hectic year to launch her business if she’d tried, as Covid-19 disrupted fashion businesses and supply chains internationally. Tencel fibre is made in Austria, the fabric woven in China and the garments manufactured in Sri Lanka before being sent to New Zealand for purchase by NZ, Australian, US and UK customers through the Videris website. Stoppages along the production line meant the brand’s launch was delayed by months.

She and her team had to think about whether it really was the best time to launch, but their messaging of comfort and self-love seemed as though it was made for a time like today, with people spending more time than ever in their sweatpants at home.

“People had spent so much time alone and finding themselves, and that meant they were really thinking about how they were presenting themselves and whether that was actually how they were feeling, and I think that language we already had as a brand was even more relevant.”

That messaging was one of intention, a series of words coinciding with each colour in the series that Julian wanted people to truly feel when they got dressed each day. She wanted to play on the idea that other industries have used for years, that colour can make people feel a certain way.

It’s why fast food brands are so often red – according to popular belief, the colour makes people hungry (this is scientifically unconfirmed). “In the morning you’re already getting ready, you’re putting your underwear on and it’s an opportunity to have a mindful moment with yourself, that inner self. How do I feel? How do I want to feel? And choose your colour because of that.” The olive green used in the Videris logo, for example, symbolises feminine power and compassion, while the “future” violet represents imagination and spirituality.

With another child on the way, Julian knows better than any the importance of comfort. The design of the Videris bras and the Tencel fabric used means there is room for natural growing that happens in pregnancy and even during menstruation, and the adjustable straps and hook and eye closure provides even more customisation for each woman’s unique fit.

“Women become so used to thinking ‘I’ll put this [bra] on and I’m going to feel it.’ When you get to 4pm you just want to take it off. The wire is affecting your diaphragm, it affects your breathing. We just accept it and we don’t really need to.”

Her designs for other brands haven’t always been about comfort, but Julian wants Videris to make women feel unrestricted in both a literal and metaphorical sense.

“I think with Videris meaning ‘you are seen’ [in Latin], it’s also about shifting that lingerie paradigm from how you look to how you feel.”