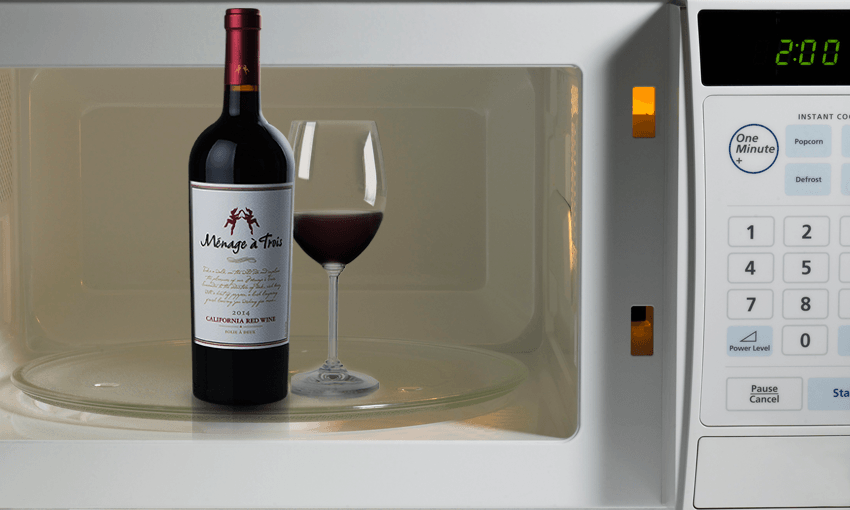 Microwaving your red wine… is a thing???

Should you microwave your wine in winter? A Spinoff investigation

Microwaving your red wine… is a thing???

I was reading Kia Ora magazine’s wine column recently, as I am wont to do. Its author, the veteran wine writer and Master of Wine Bob Campbell, began his latest entry by rattling off a few paragraphs about chardonnay, merlot, and several other “treats of the vine”, as we in the wine community call them. I was content; in my element. But then I came across two sentences that sent waves of revulsion coursing through my refined palate and into my entire body.

“Use the microwave to return reds to drinking temperature,” Campbell wrote. “I microwave every glass of red wine during winter or if it’s taken from my 14°C cellar.” [emphasis added to convey disgust]

I had to choke back an Air New Zealand lolly to stop myself running into the aisle screaming “philistine!” and being subjected to an in-air citizen’s arrest. Master of Wine? Master of the barbarian hordes, more like. I wouldn’t put a $10 bottle of Countdown cleanskin in the microwave on the bitterest Auckland night. Wine is meant for sipping languidly under a parasol as the late-summer sun washes across the Tuscan hills, not for shoving in a microwave on high like a pack of Maggi 2 minute noodles.

I rang Campbell immediately upon landing, demanding he explain himself. He was unrepentant.

“All you’re doing is warming it up. Getting it to a better temperature. You’re not changing it in any way. So what’s the downside?” I said the downside is that you’re microwaving wine like a brute. “Have you tried it?” he asked. “Of course not,” I replied. “It’s pretty good,” he said.

Campbell outlined his wine-microwaving routine. “My routine is to take wine from my cellar… pour myself a glass of red in a stemless glass. Taste it, say yup, that is too cold. Put it in the microwave for 10 seconds. If it’s too warm, add a bit more cold wine to it. If it’s too cold, give it another second or two until it’s absolutely bang on,” he said. He claimed to have conducted an experiment where he microwaved half a bottle of wine, left the other half of the same bottle unmicrowaved, then ran tests to see whether microwaved wine deteriorated quicker. “It didn’t,” he said. “There does tend to be a shock-horror sort of reaction to [the concept of blaspheming the spirit of the vine by microwaving its sweet nectar]. But you can be too precious about wine.”

Too precious. About wine?

Campbell may have been happy sipping radioactive berry goop, but I wasn’t. I decided to ask other wine masters whether it’s good practice to irradiate your vino to room temperature.

Restaurateur Judith Tabron, a writer of wine lists for 30 years and purchaser of “large quantities” of wine, was shockingly cavalier in her confession. “Yes, of course I microwave my red wine,” she said. “I don’t cook in my microwave but I sure heat my wine.” She was remorseless; unrelenting. “My husband and I both do it. People who come round cannot believe that we just put a bottle of wine in – it might be 10 or 15 years old– and we just put it in the microwave.”

Paul Tudor, a Master of Wine like Campbell, also failed to convey visceral disgust at the practice of zapping vino. “I don’t have a problem with it. I don’t personally do it, but it’s not wrong.”

He recounted a story of a ski trip where some of his friends left a bottle of extremely expensive Château Margaux wine in the boot of their car. Finding the wine all-but frozen, they used the microwave to bring it back to drinking temperature. I asked whether the wine was a despicable witches’ brew. “Apparently they thought it was amazing,” he said.

What was amazing was the depraved state of his friends’ souls. Desperate, I went to Jules van Costello, a wine director at Cult Wine and natural wine specialist. “I don’t believe it’s not right to microwave wine,” he said, in a profoundly confusing and disappointing double-negative. “Personally I wouldn’t do it but if you get the result you like, I don’t really have an issue with it.”

Freelance wine writer and Spinoff hack Claire Adamson was even more ambivalent. “People are far too afraid of wine, smdh,” she wrote, apparently in support of Chernobling the nectar of the gods. “It’s just a drink! Sometimes it costs less than beer!!!!”

What I am smdh at is Adamson treating wine like one of Helen Clark’s forgotten cups of tea. But she was far from alone. Apero sommelier Mo Koski said he wanted to have “no opinion, if that’s possible”. Wine critic Jayson Bryant said it was fine so long as the bottle didn’t cost more than $30. Jesus said in the Bible, “my God, my God, why have you forsaken me”.

I decided to give up on wine “professionals” and contact a New Zealander with class and style. A day later a reply email from Matilda Rice popped up in my inbox.  “I can’t see anything wrong with it?!  Who likes cold red wine? And mulled wine is hot, so I guess you could microwave that too.  So, in short – yes I think it is fine.”

I wept. In that low moment, I almost gave up on finding someone who respected the vine. But then, hope appeared on the horizon. New Zealand’s first and only Master Sommelier Cameron Douglas delivered what appeared to be a defence of the sanctity of Lady Vino. “I do not recommend the practice,” he said. “I don’t see the point in changing a wine’s composition just to drink it sooner.” All that was required to heat a wine was a little time, and the right glass, he said. “I guess also that if one needs a drink that desperately then the problem might be the person and not the wine.”

Relief flooded through me. Douglas understood. But then, a final kicker. “That said, I’m not too serious about it either.”

Not too serious!? Were we also “not too serious” when Michelangelo’s David was battered by a protester with a hammer? When ‘Ecce Homo’ in Borja, Spain, was repainted in the style of a sugar-crazed toddler?

There was only one voice left I could trust. One expert I could rely on. I texted the Champagne Lady herself, Anne Batley Burton, asking her opinion on microwaving wine. Her reply was quick and decisive.

“Personally I don’t agree with it! I never zap anything and to me, it goes against all the principles of nature! It’s more a matter of style to me as well. Seems a bit crass, to be honest,” she said.

Game. Set. Match, reprobates. New Zealand’s foremost drinking expert has spoken. Wine is a drink to be supped delicately alongside nibbles at your finest log of caviar, not nuked like the asteroid on Armageddon.

But if you are a member of the unwashed masses, sophisticated as a seagull in a rubbish dump, then I guess there is some good news in this investigation: most of New Zealand’s wine experts believe it’s probably actually fine to microwave your wine during winter.

Better living everyone, and may God have mercy on your souls.