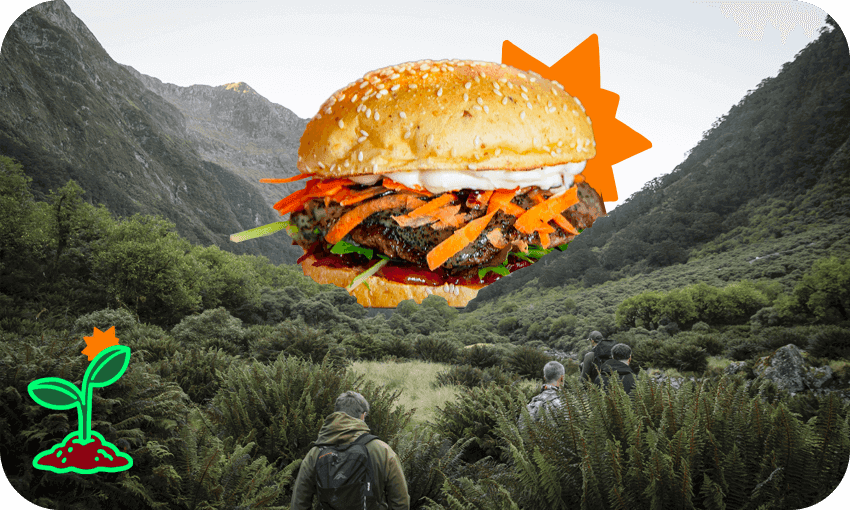 A new initiative from BurgerFuel is turning rescued ingredients into something that tastes great. Charlotte Muru-Lanning looks at how the restaurant is collaborating on new ways to reduce food waste.

In 1905, as part of a well-intentioned exchange, US president Theodore Roosevelt, himself a keen hunter, gifted a herd of 10 wapiti to New Zealand. More than 100 years later, the deer, which are native to North America, have become a menace to native flora in Fiordland in the South Island. The grasses, shrubs and herbs like kamahi, silver beech and broadleaf across the area, are also their breakfast and dinner.

“We describe it as being like the Amazon or the Himalayas,” says Fiordland Wapiti Foundation chairman Roy Sloan of the wild expanse of land the animals roam. The foundation is a recreational hunting group which undertakes the management of 175,000 hectares of back-country in the Fiordland National Park.

The group’s aims are two-fold and somewhat symbiotic; managing the area for recreational hunting, as well as lowering the impacts the deer have on the environment through population control and wider conservation projects. Each year, the group runs a ballot which extends over 40 days. Hunters enter and, if they’re drawn, head in to hunt the area which Sloan describes as “some of the most rugged country in New Zealand, maybe even the world”.

But while recreational hunting in the area is done on foot, wapiti populations are controlled by helicopter. The dramatic weather in the area means days viable for shooting and recovery from the air are limited, but the organisation averages around 1,000 culled wapiti a year.

During lockdown, the venison market essentially collapsed with the closure of restaurants, explains Sloan. “We were basically shooting deer and leaving them on the ground in Fiordland,” he says. Because recovering deer after they’re shot is too expensive without a viable market, most of the high-quality venison was simply left to decay.

“While people are starving and with the shortage of protein around the world, it’s far too good of a product to be left to waste,” he laments. “If we’re killing these animals, I believe we need to justify it by actually doing the right thing – and that’s consuming it.”

Now a new initiative is providing an opportunity to process the deer for food. The group is working in collaboration with BurgerFuel, and food waste-reduction ventures Citizen Collective and WITHWILD, on a new burger available at BurgerFuel from 12 July.

The Wild Heart burger uses culled wapiti deer from the Fiordland National Park along with other rescued ingredients that would otherwise go to waste – like crooked carrots from Pukekohe and blemished cherries from Central Otago. Along with these rescued ingredients, the burger also includes The Four Saucemen BBQ black rub, melted truffle mascarpone, crisp mesclun salad, grated beetroot with chia seeds, Citizen’s Rescued Central Otago Cherry Sauce and BurgerFuel aioli. Money made from the burger will be donated to the Fiordland Wapiti Foundation to help with the annual cull and other pest control and conservation projects. All the way through, the burger is a celebration of the potential that can emerge from rescuing, repurposing and upcycling.

It’s less spoken about, probably because for most of us it goes largely unseen, but food waste extends beyond household kitchens. Globally it’s estimated that one third of all the food we produce is lost or wasted between farm and table each year. According to anti-food waste organisation Love Food Hate Waste, although no official audits have been undertaken within the manufacturing part of the supply chain, self-reporting from food industry in Auckland found that “40,800 tonnes of food waste is generated per annum, of which 28% (11,424 tonnes) goes to landfill”.

Citizen Collective co-founder Donald Shepherd thinks the collaborative impetus for this burger is reflective of a changing approach to food waste both locally and globally from consumers and producers. Launched two years ago, Citizen Collective makes food and drink products using rescued surplus food, or food production by-products destined to be left uneaten.

“There’s a real challenge about edible food that’s currently going to waste,” he says. “Our purpose is to rescue, re-work, and upcycle that perfectly good produce, whether it’s a byproduct, or it’s an overproduction, and give it a second life.”

Launched in the midst of lockdown in 2020, their first product was beer made with surplus, unsold or returned supermarket bread – which is likely New Zealand’s most wasted food item. Every can of beer uses the fermentable starches from one rescued slice of unsold bread. The by-products from the beer are dried and milled to create spent-grain flour used as a core ingredient in a sourdough loaf.

Shepherd believes that thinking around sustainable food systems needn’t be limited to just carbon credits or biodegradable packaging. Food production itself puts massive strains on fresh water supplies, minerals, energy and forests. That detrimental environmental impact is only compounded when those products or by-products are sent to landfills. The intricacies of how large-scale food systems impact the environment mean “we have to be creative and really challenge how we think about our traditional food production models.”

There’s growing support and investment from larger organisations, as well as consumers, when it comes to rethinking the alarming amount of food we waste. Shepherd points to this year’s Kantar Better Futures report, which he reckons reflects that increasingly New Zealanders “want to make a change to their diet, because they know their diet is having an impact on the climate”. Consumers want to make conscious decisions, he explains. “But sometimes it’s not very clear what those choices are”. That’s where he believes it becomes essential for food organisations and industries to help consumers make informed and positive decisions.

“People don’t like being told they’re bad, or they’re wasteful,” says Shepherd. “By drinking a can of that cola that we’ve also designed with BurgerFuel, people are saving 29 cherries. By having this burger, they’re helping upcycle beautiful, wild venison that could have been going to waste.”

As a dish, the burger lends itself especially well to this type of sustainably-minded collaboration, where perhaps unfamiliar ingredients can be introduced to us in a familiar manner (between the slices of a bun) and imperfect-looking ingredients can be tucked away out of sight. In this case, blemished cherries and culled wapiti might not seem to have a lot in common at first glance, but the convergence of each of these once written-off ingredients finds new life as a collaborative approach to rethinking food models. It’s both sustainable, and delicious.