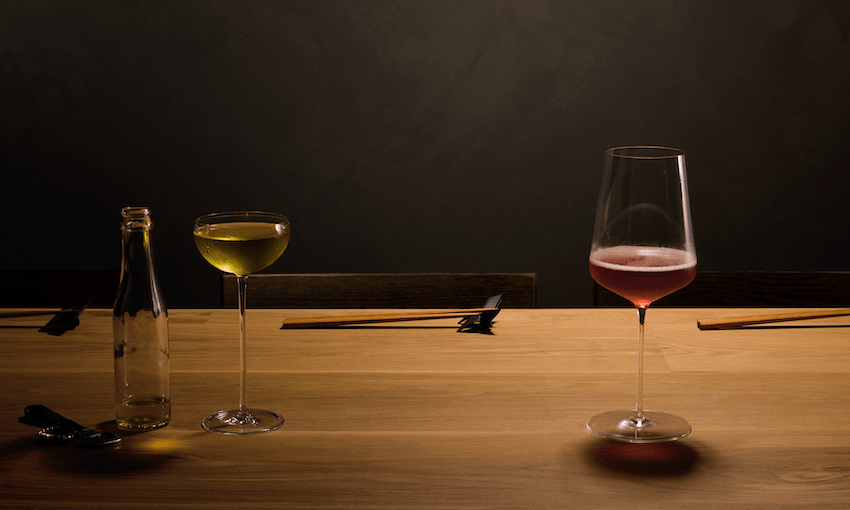 A taste of what’s on offer at Boxer (Photo: Fraser Chatham)

Not your average boozer: Boxer is set to raise the bar in Auckland’s cocktail scene

A taste of what’s on offer at Boxer (Photo: Fraser Chatham)

The small team behind the much-lauded Pasture is opening a bar – and true to form, it’s going to be unlike anything we’ve seen in New Zealand before. Jean Teng got a sneak peek.

You enter Boxer via a text message. Well, that’s not strictly true. If you have the foresight to book beforehand, you’ll enter Boxer in an allotted time slot, greeted out front by a chef on duty and a warm hand towel. If you want to walk in off the street, it’s then you’ll have to send off a text message to the number at the entrance and cross your fingers for a spare seat. Don’t try the door. As at Pasture, it’ll probably be locked.

Boxer is a different side to multi-award-winning chef Ed Verner; a little looser, a little less rule-following. In a way, it’s reflective of Verner’s maturity – perhaps because Pasture, Verner’s six-seat degustation-only restaurant, is now where he wants it to be, four years after opening, and a year on from nabbing a slew of awards, including Metro Restaurant of the Year and three hats from Cuisine. Verner opened Pasture in Parnell with his former partner, Laura Forest, initially as a 20-seat restaurant. It soon got scaled down for more intimate dining, with guests sitting up at the pass and the chefs acting as servers. Eating there is visceral, all hot flames and AC/DC, and the flavours are sharp and clean. The drinks pairing, particularly the cocktails – alcoholic and non-alcoholic – can sometimes steal the show, with complex balancing acts of savoury and sweet.

Media coverage has built an image of Verner as a culinary auteur with singular vision, and, for better or worse, he is a textbook example of the type of chefs we love to laud: uncompromising and demanding, of himself and his staff. It’s Verner’s boundary-pushing nature that has produced this innovative bar-restaurant hybrid – but just as the genre of “fine-dining” doesn’t fit Pasture, “bar” doesn’t quite work with Boxer either. It’s that intangibility which makes both concepts unexpected and surprising, achieving the best thing you can possibly do in an oversaturated industry: something new.

Essentially, Boxer serves up an exclusive drinks-and-small-plates experience, focused on one-of-a-kind cocktails conceptualised by a chef and executed only by chefs. A chef-run bar, you could call it, if you needed to. It opens on Wednesday, with the Boxer Instagram promising drinks like “oxidised wine infused with saffron, grilled tomato, reduced chardonnay and distilled coriander, poured over hand-chipped ice”. Sure, you can get a beer, but it might be a Garage Project apricot sour topped with matcha and clarified banana.

Boxer and Pasture are physically connected, with the former Pasture entrance down the bricked alleyway now defunct. Instead, Pasture guests will be taken through Boxer, slipping by bar-goers, and enter the restaurant through a back door. While Pasture seats six, Boxer seats double that, split between two blonde islands manned by a chef who will prepare drinks and food in front of you. The generous space, decked out in an austere Japanese minimalism, could easily fit five times that amount. But that wouldn’t be Boxer.

Innate to Boxer’s concept is Verner’s dogged need to create something universally unique where he can continue to connect one-on-one with customers. Making money? Well, it would be nice, but he’s not necessarily interested in that. “Though, obviously it would be good to make money one day,” he muses.

With Covid-19 came uncertainty. “It was dire. We didn’t know if Pasture was going to be OK,” Verner says. Boxer had already been in the works pre-Covid, but it too was in a precarious position, saved by the government’s emergency loan scheme. The pandemic has brought along some other changes, including the arrival of LA-based food writer and Verner’s current partner Hillary Eaton to Auckland and, inevitably, to Boxer.

Boxer is high-end dining, where five seasonal cocktails and small plates will set you back $175. At $175, it might just be enough for dinner, if you’re a small eater, but Verner reiterates: Boxer is not a restaurant. A three-cocktail menu, sans food, is $75 – $25 per cocktail. “Obviously, the biggest worry is that no one shows up,” Eaton says. Reports from other Auckland fine-dining restaurants suggest spending is steady, with people still splashing out big bucks for special occasions and reliably excellent dinner experiences. The problem with Boxer, then, will be if people are willing to take a punt on a mostly foreign concept – but judging from the hype generated from Verner’s reputation with Pasture, it looks like it could work. Along with set menus, you can also book in for a la carte.

Those familiar with the drinks at Pasture might have some idea of what to expect, and the philosophies are more or less the same: unusual, a bit showy, spirit-heavy with house ferments. “Chefs make better cocktails then bartenders,” Verner says. “And you can quote me on that.” It’s a bold claim (bartenders, feel free to waddle in with rebuttal) but Verner aims to back it up with drinks that are treated like an extension of the food and that are very much of Boxer. They’re working with local producers to collaborate on spirits exclusive to them, like a vermouth from Nelson natural winery Unkel, and an on-site barrel of white Thomson Whisky. The physical space, while stark, is wholly considerate of the drinks. Things pop out everywhere, hidden in cabinetry: different-temperature wine fridges, a hose to carbonate cocktails at the bar, glassware drawers.

The interior and flourishes feel very much of Japanese minimalism, down to the intricately folded origami chopstick rests. Boxer’s food speaks to this, but isn’t defined by it. Yes, there will be sashimi – the menu is seafood-led, that’s what Verner likes to cook – but Scandi influence shows up, as does, I gather, whatever the hell Verner likes. “It’s my food,” Verner sums up. Other than seafood, there’s likely to be beef tartare, a caviar doughnut, a pretzel topped with salmon roe. Who knows. Things seem to be ever-evolving, even while we speak. Like Pasture, it’ll be theatrical and fun.

It’s obvious Verner is looking forward to a new challenge – he’ll be working mostly in Boxer, with his team of chefs running Pasture by themselves next door. It’s crazy to think that at one point, Verner was running Pasture with only one other chef. There are more chefs now, all international, all without much experience in the world of drinks-making. A scary thought, but Verner doesn’t seem all that worried.

In the back of the room, I spy the rotary evaporator (rotovap). It’s a solid hunk of machine – retro and Kubrick-esque, looking oddly at home against the inky grey walls. More commonly seen in a lab to extract solvents from samples, it’s used by Verner to make aromatic distillates for his cocktails. Labelled white tubs on a tray emerge from somewhere, and I get licks of colourless mānuka honey, nasturtium (didn’t make the cut – too savoury) and lemon leaf. Producing these is essentially the same process as making gin, but done at much lower temperatures to avoid burning delicate flavours; the mānuka honey is a splash of bitter sweetness.

The rotovap can also be used to remove alcohol, creating non-boozy wine that Verner will later infuse with ferments. Remarkably, it sounds like a not-terrible non-alcoholic wine – unheard of in these parts. That’s another thing important to the Boxer team: they aim to take non-alcoholic drinks seriously, rather than lazily shoe-horning a few sickly sweet concoctions in between the beer and the coffee.

For those wondering, Boxer is named for one of Verner’s favourite albums by The National. It’s appropriate given music will play a big role in Boxer, judging from the record player occupying a space on the back bench. Verner’s initial name for the bar, Mr Roboto (a song by Styx, regularly spun at Pasture), was declared a no-go. “I told him it was a terrible name,” Eaton says. Boxer, a name that invokes a hard-edged scrappiness, suits them much better.