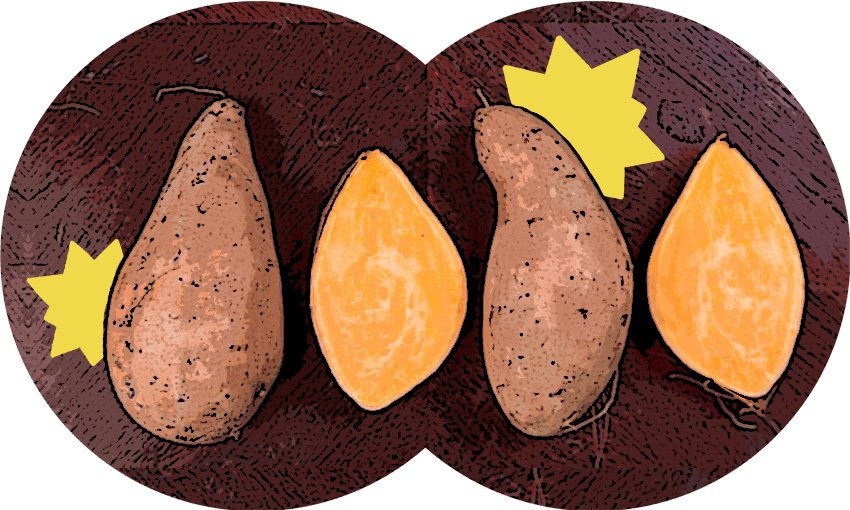 Most New Zealanders love kūmara. For those of both Chinese and Māori descent, their relationship with the humble tuber runs even deeper.

For generations, we have told kūmara stories and had them told to us – in our whakapapa, whakairo, whakataukī and whakatauākī, in our pūrākau and pakiwaitara, in our waiata, in our tauparapara, in our karakia. For centuries, long strong lines of kuia and koro and aunties and uncles have shared their kūmara kōrero, each in their own way.

My grandparents were market gardeners. The goodness that comes from gardening was in them. My Nan was tangata whenua from Taranaki, Waikato and Whanganui. My Goong Goong was from Long Gai, Guangzhou, China. Nan and Goong didn’t tell me any kūmara stories but that doesn’t mean that I don’t have one.

When the whānau got together – all 32 of us, sometimes more – to watch rugby or gossip or mooch around,  Nan would sometimes make boil-up. Because Goong was her companion, there would often be bok choy in the boil-up pot or another type of Chinese cabbage. She’d serve it up in small duck-egg green rice bowls and we’d slurp it down with our Chinese soup spoons and chopsticks.

Lots of our whānau meals were like this. To make do, Nan would throw in what she had, and Goong, what he had, each adding little offerings. My favourite offering of Nan’s was the golden kūmara. To my mokopuna eyes, the bits of kūmara sitting in the boil-up broth looked like stones of slippery gold in an oily grey pond.

True, it’s not a well-known kūmara story. Instead, it’s a story from me, from my heart, about the way kūmara gave sustenance, growth and love to my whānau. If I asked my sister, her kūmara story would be different. If we asked our next door neighbour her kūmara story would be different again and so it would go, from her to her cuzzies in the Pacific, to their cuzzies in the Americas, to theirs in Asia – a multitude of kūmara stories, all slightly different, sprouting across the world.

Kūmara: a keeper of stories. A name in almost every place you go, and a whakapapa to match. In Aotearoa, we tell stories about how Rongomaraeroa retrieved kūmara from Whanui (the star, Vega) and gave it to Pani so that she could show humans how to nurture and grow it. In Quechuan-inhabited areas in the Andes, the kūmara is called the kumar or kumal. Horticultural scientist Rodrigo Estrada de la Certa tells stories of an Andean deity, Pachamama, the earth mother, who is worshipped especially for protecting crops like the sweet potato that grow deep in her bosom. In China, kūmara is called Gānshǔ 甘薯. Xu Guangqi, a Ming dynasty scholar, wrote of the sweet potato in his treatise Nongzheng Quanshu (‘The General Affairs of Agriculture’), endowing it with a “resilience and incredible versatility’” after the “father of the sweet potato” Chen Zhenlong first brought the gānshǔ 甘薯to China.

While my own story connects the kūmara to humble family meals and joyful commune, there are those who view the kūmara as a sacred offering, as manna from the gods, growing in the space between the physical and spiritual realms.

In Ngā Pepeha o Ngā Tīpuna, Hirini Moko Mead and Neil Grove remind us that “kūmara is….the most tapu of all foods, a god food’ with nearly 40 whakatauki reinforcing its mana and mātauranga. Mead and Grove retell the famous pūrākau of Rongomaraeroa, the child of Ranginui and Papatūānuku, reminding us that his name is both that of the atua who retrieved kūmara from the heavens as a gift for us on earth and the honorific name for the kūmara itself – making the kūmara, in different forms and in different moments, a sacred, spiritual symbol and a starchy, nutrient-packed staple.

The kūmara is held in such esteem among Māori that its origins were the subject of a debate among tribal experts from the east, west, north and south of Te Ika-a-Māui some time after the land wars in the 1870s. In Tears of Rangi, historian Anne Salmond says that during the debate the kaikōrero recited “proverbs, chants and songs” to illustrate their knowledge of this prized crop, to align their high status with that of the kūmara and to affirm their understandings of – and connections to – this place.

I can see this fusion of people’s understandings of who they are and how they relate to the world on the faces of growers like Te Rangikaheke Kiripatea (Te Arawa, Ngāti Uenuku Kōpako), Lorinda Pereira (Ngā Puhi, Ngāti Whātua, Ngāti Kahungunu) and the late Wiremu Tawhai (Te Whānau-ā-Apanui, Te Whakatōhea, Ngāti Awa) when they share their mātauranga about the kūmara. The wisdom of these ahu whenua/earth nurturers is planted deep in their hearts. It’s plain to see that when they cultivate kūmara they are communing with the land, their people, the ancestors and the gods, they are growing a crop that will nurture and sustain them all for generations.

Kiripatea explains that the kūmara shapes who he is as Māori: “The history of the kūmara…is in our DNA, it’s in our whakapapa, it’s in everything that we do. It’s a natural, integral part of us.”

Pereira knows that the kūmara “connects us to our whenua and our tūpuna” because for many, many generations, it’s been cultivated, harvested and gifted in the same unique way.

Good gardeners will know kūmara planting and harvesting tikanga because they collaborate with the iwi, they listen to their stories and will connect all the signs – the calling and settling of the birds, the changes in the winds and rain, the fullness of the moon and tides, the blossoming of flowers – to an understanding of how to cultivate the land so that the crops they grow will be strong and plentiful.

[The kuia and the koroua] start to look at the characteristics of the season and the appearance of various signs, they look at changes in the weather along with the wind and the way it blows on their cheeks. They turn to the stars, they know when Whanui/Vega sits on the horizon that is the most  important sign of all. When they hear the small bird singing its song, they’ll know that’s what that signifies.

Kiripatea, Pereira and Tawhai’s profound understanding of the environments they work in and of the teachings of their ancestors and atua is writ large and beautiful in the flourishing iwi gardens they have cultivated across Te Ika a Maui. These ahu whenua have piles of stories and an abundance of knowledge about how the kūmara grows and the many gifts, practical and poetic, that it bestows on those whose lives it shapes. When they talk about the kūmara’s gifts – its nutritional goodness, its practicality and hardiness, and its role as a protector of us all in tough times – their deep-rooted love and devotion to the topic is clear.

My Chinese ancestors’ stories about the gānshǔ 甘薯 were slightly different to those of our ahu whenua. Even though the kūmara protected and nourished them through times of crop failure, famine and instances of terrible poverty, their relationship with the kūmara was bittersweet. Because the gānshǔ 甘薯gained a reputation as an emergency food, it had a lowly status. Its ties to hardship and peasantry meant Chinese growers did not quite share the love for those stones of slippery gold that I felt. Yes, they craved the kūmara’s dense nutritional offerings but were unconvinced of it as a symbol for identity and growth.

Back here in Aotearoa, Chinese immigrants and market gardeners Joe and Fay Gock found themselves at the root of a kūmara story whose tubers have dug themselves deep into our shared past and our shared future. Theirs is a story that shows how in our hardest, toughest times, the kūmara brought us together and sprouted yet another new story and another new beginning.

Decades ago, when Northland kūmara farmers’ crops were devastated by brown scurvy and black rot, the Gocks donated their strain of disease-resistant Owairaka Red kūmara to them, thereby saving the Northland kūmara from what would have been a tragic demise. To me, the biggest beauty of this kūmara story is that the Owairaka Red came from a kūmara plant given to them by their neighbour Hiko Taniera Wilson in 1952.

The Gocks’ generosity, foresight and love, not only for the Owairaka Red but for all things horticultural, describes a relationship between peoples and the whenua, between human economy and agriculture, between the local and universal, between getting in trouble and helping others out of it. The Gocks’ story is one of acommunity raised on love of the kūmara.

Whether kūmara stories are as small as those whispered between siblings or as mighty as the celestial whakapapa recited at a gathering of chiefs, there’s nourishment in sharing all these stories with kūmara at their heart. Why? Because they’re all part of a larger, many-tendrilled root system, one that connects everything and everyone to each other in growth and in love.

This essay was originally commissioned as part of Twin Cultivation, a Tāmaki Makaurau installation inviting you to harvest a ceramic vegetable for a stranger. Running Mon 27 June — Sun 10 July 2022. twincultivation.co.nz