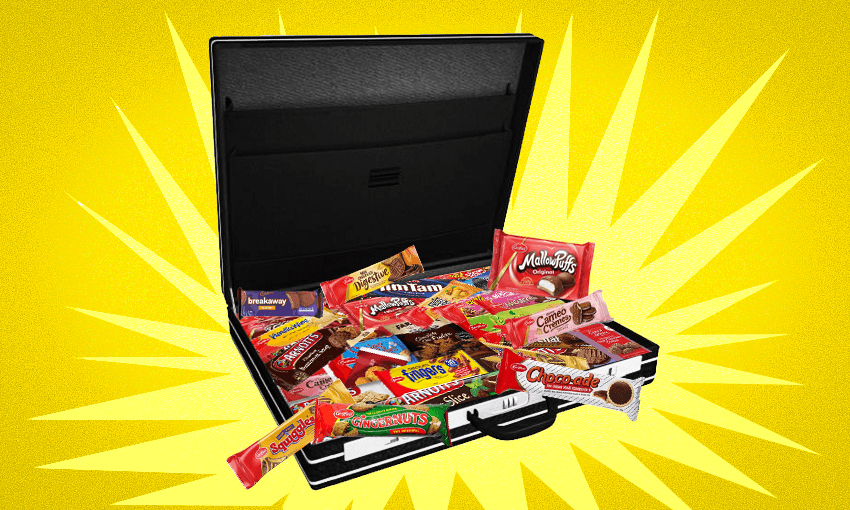 What biscuit should be brought to negotiations? (Image : Tina Tiller)

Deal-bakers: the very best biscuits for a winning negotiation, revealed

What biscuit should be brought to negotiations? (Image : Tina Tiller)

Yesterday Marama Davidson said that the Greens-Labour negotiations had been lubricated by the introduction of Mallowpuffs in place of Krispies. Today the Green leaders emerged from negotiations with a tray of assorted biscuits, which may or may not be a concession granted to them in return for parliamentary confidence and supply. But which biscuits are the best to bring to a meeting in pursuit of a successful negotiation? The Spinoff asked a select group of New Zealand luminaries what might work best with them across the table.

Gotta be Arnott’s Lemon Crisp. Salty and sweet, highly divisive, a biscuit you can have the tough conversations about, as well as with.

While they may have got other things wrong in the negotiations, Labour-Greens unquestionably got the biscuit right. The classic Mallowpuff is the Rolls Royce of New Zealand biscuits. Toffee pops, chocolate fingers, squiggles, ginger nuts, krispies etc don’t even come close.

Simon Bridges is a former leader of the National Party

Simple. Cassava Chips or the CookieTime Cookie. Both great conversation starters with your fellow passenger or alliance partner!

Christopher Luxon is a future leader of the National Party

Every deal I made that was over a million $ had Snickers Mini on the table, unpacked and chilled in a fridge for 30 minutes before serving in an ancient golden crystal bowl that is LED lid at the bottom and plays an angelic harp sound every time someone is reaching for the bowl. Turns the mood of the meeting positive, more likely to close a deal ?

Kim Dotcom is the founder of Megaupload

Helen Clark is a former prime minister of New Zealand

Big biscuit fan but controversially, can’t stand Mallowpuffs. Mint Slice would probably do it for me.. but if too fancy then ginger nuts or… squeeee.. chocolate digestives

As to why? Probably because I’d be distracted by the offerings and therefore less likely to be focus set on the small print ;)

Alison Mau is a journalist

Griffins Chocolate Chit Chats: because they are the true chocolate lover’s biscuit, and are made by a New Zealand company (as opposed to the similar inferior Australian product).

Matthew Hooton is a PR guy

100% candy Squiggles, preferably refrigerated. Because they are delicious, fun, and unpretentious. Squiggles really lighten the mood and make everyone chill out, so negotiations end up just being like “sweet, have whatever you like”.

Kura Forrester is a comedian

My favourite is krispies I love dunking, I love sweet, I use to dunk and eat the whole packet so good parekareka te sweet.

I think you can tell a hell of a lot about a person in this situation with their choice of option.

Al Brown is a chef

I do understand why Mallowpuffs were more successful than Krispies – to be blunt, anything would be better than Krispies.

I’m personally trying not to eat biscuits right now, so turning up with them may not put negotiations on a strong footing. But if someone was to turn up with homemade ANZAC biscuits, then we could be talking! Why? Because they are simply delicious.

Lianne Dalziel is the mayor of Christchurch

Take fry bread, butter and golden syrup and a copy of the treaty.

Annabelle Lee Mather is the editorial executive of the year

I’m a fan of a Mallowpuff. My Gran, Molly Gordon, made the best caramel crumble shortbread (boiled condensed milk caramel) and so long as the biscuit part is dark golden brown then I’d be happy to meet!

Peter Gordon is a chef

Arnott’s mint slices will do it.

Siouxsie Wiles is a microbiologist

It has to be Krispies. How can anyone be taken seriously when they’re eating a mallowpuff?

But really, in my experience, it’s strong black coffee that really matters when it comes to successful negotiations.

Chris Bishop is a National MP

I’m going to say Squiggles, because I reckon you’d get a laugh and a meeting with a few laughs is a good meeting. They are a kind of birthday party for kids biscuits – fun to look at, not too crumbly, with a hokey pokey flavour and excellent texture. Our UK friends ask us to bring packets of these over if we’re travelling that way. Obviously they won’t be getting any Squiggles for quite a while.

Jennifer Ward-Lealand is an actor

Squiggle Top (now known as Squiggles): it’s the biscuit of a generation. Jacinda’s and James’ generation. They’ll be able to reminisce on which is better – What Now or 3.45 Live, ponder what ever happened to Olly Olsen and question why they were never able to stay up late enough to watch Goodnight Kiwi.

Justin Lester is the former mayor of Wellington

Mallowpuffs: the marshmallow reverses cortisol. Although we have just discovered the startling re-oxygenation properties of Cookie Bear: Hundreds & Thousands.

Tilly Lloyd is the proprietor of Unity Books Wellington

Good grief, after the biscuit ranking? The challenge is that you don’t know how long negotiations will take, so you need a biscuit that suits different times of the day. Without being too parochial, I think shortbread would be a solid option. It works equally as well with morning tea as it does with a single malt (deeper into proceedings).

Aaron Hawkins is the mayor of Dunedin

Without a doubt, I’d bring Chocolate Wheatens to the negotiation table. The CWs’ hearty, oaty soul is akin to a comforting bowl of porridge on a cold morning, while the chocolate adds that touch of jazz many of us seek in a snack. A biscuit that transcends generations, a wheaten keeps both digestive-loving traditionalists and new-age chocolate biccie lovers happy, laying the foundations for peaceful and productive negotiations. As they say, a choccie wheaten can’t be beaten!

Triple chocolate cookie time! NZ, three X chocolate and you can still say to your wife (who has put me on a diet) that it was just one biscuit – even though it’s the size of three.

Jason Paris is the CEO of Vodafone

McVities Chocolate Digestives because nothing tastes better with tea.

Sophie Gilmour is a hospitality consultant

Put me down for a mint slice. Timeless. Classic. Oddly refreshing.

James Tame is a broadcaster

Well my all time favourites are Jaffa Cakes from McVities – although technically, they are a cake…with a delicious orangey centre. I always thought when I was young and poor, that when I was rich, I would always have the cupboards stocked with Jaffa Cakes as we couldn’t afford them when I was a kid. Just seeing them puts me in a good mood. I don’t buy them very often, as I have no willpower as far as they’re concerned- once they’re open, I can just eat the whole packet in one go!