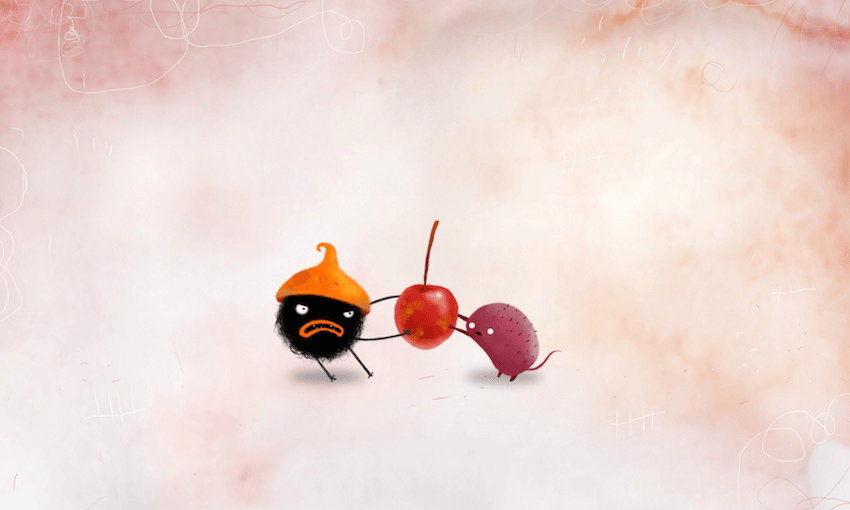 Chuchel is the new game from Amanita Design and has, to be generous, a problematic title character.

Chuchel is fun. So what’s up with the blackface?

Chuchel is the new game from Amanita Design and has, to be generous, a problematic title character.

Chuchel, the new game from Amanita Design, is a fun romp of a game. But why the hell is the title character perpetuating blackface?

Chuchel is a little ball of dust and soot. That’s what his name means in Czech, ‘ball of hair and dust’. He’s a “fuzzy critter”, a “hairy ball of uncontrolled emotion”. He’s a “little fuzzy black creature” with “anger issues”, reminiscent of Daffy Duck  “both in appearance (black-lint body and orange mouth) and in his irritable personality”. He’s a “literal black fuzzball of energy with orange lips and an orange tuque in the shape of a Hershey’s kiss”.

These descriptions and others like them, published on high-profile video game publications across the internet, are all accurate. There’s nothing incorrect about them. But they avoid addressing, head-on, what Chuchel looks and behaves like.

When you play Chuchel, the new point-and-click puzzle game from renowned Czech studio Amanita Design (they developed much-loved adventure games Machinarium and Botanicula), it’s clear why he has that look. A large, unseen bully keeps stealing Chuchel’s cherry, and Chuchel doggedly follows that cherry – his cherry – through the surreal habitats of his world’s musical, grotesque-cute creatures. All these creatures are vividly coloured: neon greens and cool cyans and hot purples. Chuchel stands out in the space. You can pick him out easily.

The Amanita team have described why he acts like that, too. In an interview with Polygon, the studio described Chuchel as “inspired by an archetype known from comedy movies – he gets angry very easily, acts silly all the time and it’s fun to watch him do pretty much anything.” And when a Twitter user tweeted directly at Chuchel lead designer Jaromír Plachý about Chuchel’s resemblance to old blackface tropes, Plachý responded, “I certainly did not want to offend anyone! Chuchel is inspired by my personality and personality of my black dog.”

We don’t know what the whole story is. Plachý and his Amanita colleagues haven’t been asked about this in any interviews they’ve done for Chuchel, and most outlets have been pretty quiet. The only published reviewer to tackle it is Slant’s Steven Scaife, and even then only in a post on his personal blog two weeks after his review.

Blackface and minstrelsy have had a huge influence on modern animation, though. In her piece for Vulture, ‘How Today’s Most Daring, Weird Cartoons Transform the Minstrel Aesthetic,’ Lauren Michele Jackson notes that “cartoons keep the aesthetic principles of minstrel shows alive and could not exist without them.” It’s not just in the face and the make-up – it’s in the characters’ clothing (Bug’s Bunny’s and Mickey Mouse’s gloves were inspired by the Jump Jim Crow outfits worn by vaudeville minstrels), decision-making and physical fluidity.

But for some reason audiences and makers are resistant to this conversation, which is aptly illustrated by how we keep having to have it again and again and again. The video games industry resisted that conversation last year after the release of bullet-hell smash Cuphead; Unwinnable writer Yussef Cole persuasively pulled apart that game’s 1930s aesthetic in his piece ‘Cuphead and the Racist Spectre of Fleischer Animation’, digging deep into how a lot of that game’s imagery was rooted in racist and anti-semitic cartooning. The Czech Republic resisted that conversation in 2016, after variety television show Your Face Has a Familiar Voice rolled out an assembly line of white performers dressing up in blackface. And we resisted that conversation two months ago, with New Zealanders rushing to Facebook en masse to defend their God-given right to own a golliwog.

We’re doing it again with Chuchel. On top of Chuchel’s appearance, the titular sootball is lazy, short-tempered and voracious, like his cartoon ancestors and their vaudeville ancestors before them. His arms splay out like spaghetti strands whenever he tries to pull something that’s too big for him, and his lips explode past his body whenever he screams in frustration. In the very first scene, you have to wake up Chuchel up, but he’ll go to extreme lengths to stop any alarm. Eventually, you have to set up a small Rube Goldberg chain to fill a bird up with water and get that bird trapped in Chuchel’s mouth. This is all cartoon logic, but it also makes Chuchel one of those “unruly, unschooled bodies” Jackson writes about.

And absolutely, Chuchel is fun. Most of Chuchel’s puzzles ask you to work through a series of prompts that play out like one of those Ice Age shorts with the squirrel – either you move on to the next step in this convoluted ACME plan or Chuchel gets stomped, or eaten, or laughed at by the other creatures. These little scenarios could and should be cute. The sound design and music are joyous and full of treats and surprises, like a Conan Mockasin project for toddlers. The other character designs are odd little twists on storybook illustrations, a little Svankmajer and a little Nickelodeon. The puzzles aren’t challenging, but their solutions have a charming imagination. The ingredients are all there.

At the centre of all these little vignettes, though, is a screaming golliwog looking for his cherry. Chuchel has a deep affection for that golliwog, but he doesn’t stop being a golliwog. Fun isn’t enough; being cute, or a cartoon, shouldn’t be enough. We’re so willing to cut people slack for their ignorance and casual racism if it’s aimed at kids, something Christine Ammunson points out in her piece about golliwogs for The Spinoff Ātea earlier this year. ‘The kids don’t see racism so it doesn’t matter,’ the argument goes. ‘It’s just a symbol of someone’s love, or it’s just cute, or you’re reading too much into it’.

You can see where it comes from. Childhood is a time of innocence, basically. For many, this means that things meant for children are also innocent. They can’t possibly carry the weight of generations of racism on their backs; they can’t matter like that. But if these things truly didn’t matter, we’d be fine with leaving these designs, these characters behind. We’d be fine with picking up new designs and, as Lauren Michele Jackson points out, remixing those old designs to challenge old norms and repair the damage those designs have done in the past. We wouldn’t have to fight tooth and nail every time someone points out that this imagery was made, generations ago, to treat black people as inferior and entrench white supremacy. There is no wriggle room there. Not even if you’re a chuchel.