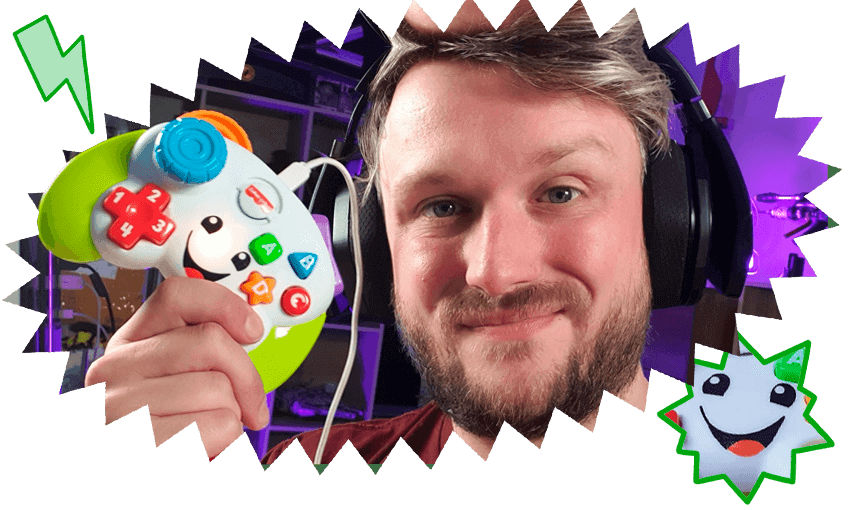 Rudeism, with his homemade Fisher Price controller. Yes, it works. And yes, he can beat you in a game with it. (Image: Tina Tiller)

Rudeism, with his homemade Fisher Price controller. Yes, it works. And yes, he can beat you in a game with it. (Image: Tina Tiller)

Ever played Overwatch with a bunch of bananas? Untitled Goose Game in a goose suit? Twitch streamer Dylan Beck has done all this and more – but why?

A well-made gaming controller is a thing of genius – a perfect balance of comfort, style and functionality. Christchurch-based Dylan Beck, who streams to 54.6K Twitch subscribers under the name Rudeism, throws all of that received wisdom out the window. Rather than making controllers that are comfortable to hold, look sleek and cool and make it easy to play games, he creates the exact opposite.

Beck went viral earlier this month for making a controller out of a Fisher Price Game & Learn gamepad, a toy designed to be easier to use for a child than your average controller. Baby’s first controller, if you will. Incredibly, he didn’t do it by cannibalising the parts. It still looks like the original toy, and it still makes all the annoying sounds that drive parents to madness.

It also actually works. Just last week, Beck posted a video showing him achieving a million-point combo in Tony Hawk’s Pro Skater with it. Many gamers couldn’t do that with the controller the game was actually intended to be played with.

THIS is how Untitled Goose Game is meant to be played.

This isn’t the first time Beck has gone viral for something like this. He’s beaten Dark Souls III with a single-button Morse code controller (258,250 button presses), clocked Jedi: Fallen Order with a motion-controlled lightsaber (on the hardest difficulty) and rigged up an actual tractor to play Farming Simulator 22 (it’s called the “tractroller”).

Most impressively, he made a full on motion-capture goose suit to play Untitled Goose Game. When he honked, the goose honked. When he waddled (on gamepads), the goose waddled. When he flapped his arms, you guessed it, the goose flapped its arms too.

Beck started doing these stunts as a joke. He first started streaming back in 2015, playing Rocket League to a small audience. His friend joked that he should try playing the game with a Guitar Hero controller – essentially a guitar with buttons instead of strings – because Beck used to play that game competitively in its heyday.

“So I figured out how to do it, tried it out one day and it worked way better than I expected it would,” he says. “It gained a little bit of traction, and ended up being fun as well, so I wondered what other games I could play with weird, pre-existing controllers.”

The one that blew him up was playing World of Warcraft with Dance Dance Revolution pads (as in, directional pads that you step on). He went from level one of WoW to 100 in just a month, purely using the pads. For context, that usually takes 50 to 60 hours of gameplay the normal way. Beck did it all with his feet.

After that, the natural evolution for Beck was making his own controllers, rather than using pre-existing ones. “I’ve got a background in computer programming, so I decided I could probably figure it out.” He found a tool called a Makey Makey, essentially an invention kit, that would let him take any object, provided it was electrically conductive, and turn it into a controller.

His first controller? Several bananas, which he wired up and played Overwatch on.

and thanks to @Wario64 for the off-hand joke that inspired me to make this happen 😂 pic.twitter.com/3OETvcsEsI

The idea for the Fisher Price controller came to him in early March. Wario64 (an Amazon affiliate with 1.1M followers) tweeted about how the toymaker’s gamepad would be perfect for Elden Ring, 2022’s notoriously difficult monster hit. It was an off-handed joke, but Beck didn’t take it as one. He saw it as a challenge.

He went down to Toyworld and bought a Game & Learn not long after. Making the controller wasn’t the hard part, he’d done that before. “The thing I wanted to do, which I wasn’t sure was entirely possible, was to preserve the existing electronics of the thing itself so that it still did all the annoying sounds,” he says. “I can create my own stuff! I’m not very good at not destroying stuff that already exists.”

So actually building the controller was a process of figuring out what he could get away with removing, and how to work around that to preserve the pre-existing functions. He uses the thumbstick as an example. The store-bought gamepad has one, but it’s not one that controls movement like on a standard controller gamepad. It’s just a button for toddlers to press.

Beck removed the existing thumbstick and replaced it with a new one that he had specifically designed and 3D printed for this gamepad. Then he had to rig it back up with the actual gamepad so it still made the sound.

If you’re eagle-eyed, you might notice there’s only one thumbstick on Beck’s gamepad, compared to every major game controller on the market, which has two. Beck modified the slide switch on the bottom of the controller to dictate whether the thumbstick is mapped to the left or right thumbstick on a standard controller.

…i was kinda joking before, but now i think we could actually pull this one off😎 pic.twitter.com/8oCr8ox1cS

Those are just two of the difficulties that Beck overcame making the controller – there were others, including where to put a USB port and how to actually make all the wiring fit in. “All in all, it took about two weeks from seeing the tweet to having it done.”

“It was definitely quicker than most controllers I’ve built, I think, because there was a lot of guesswork involved,” he says. “Normally when I’m building the controllers I’ve made over the years, there’s a whole lot of 3D work I’ve got to do. Others that I’ve built that are more experimental require a lot of trial and error, especially when there’s motion controls involved.”

When he started, Beck’s limitation was his own knowledge and expertise. Now, the limitation is time and money. His dream? “I want to take a sports car, a nice sports car, and turn it into a controller to play racing games.”

Beck describes what motivates him as “doing silly shit for the sake of doing silly shit,” an urge that precedes his streaming days. “I’ve always felt that way about things. I remember when I was in high school playing World of Warcraft, and my favourite thing to do wasn’t what anyone else was doing at the time,” he says. “You would team up with people and do raids, fight, whatever, but the thing I liked to do was sneak around completely undetected.”

He would slip into enemy faction cities – essentially the enemy base – without their knowledge, and simply sit, waiting to see if anybody would notice. “Of course, they would. They’d kill me because I’m not supposed to be there, but I would just go back. I would die, come back, die, come back.

“I did it for months, almost every day – for hours a day, this is all I would do – and it got to the point where I actually ended up befriending a whole lot of people on the other side because of it.” At that point in WoW, there wasn’t a way for opposing factions to talk to each other. So Beck’s avatar’s presence became a method of communication in itself. He became so popular, the other faction usually ended up letting him live, healing and protecting him while he was in their territory.

“That kind of gameplay, just doing stuff and finding my own fun in things, has been a big drive for me over the years, especially finding my own fun in ways that are not intended at all,” Beck says. It’s easy to see why his stunts are so popular with his audience – they show that games don’t have to be played in a certain way, and in fact you can play them however you want. Even if that means dressing up like a goose to play Untitled Goose Game. Especially if it means that.

“I do feel bad for people whose asses I kick online with my weird controllers, sometimes,” Beck says.“They find out that’s how they lost, and that can’t be helped. I don’t try to rub in their faces at all! I’m just like, ‘Hey, man. I’m sorry.’”